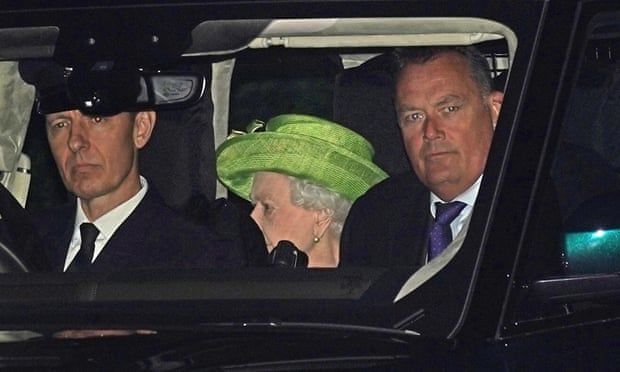 Monarch, 95, present for joint baptism of the sons of Princess Eugenie and Zara Tindall

The Queen attended a christening at Windsor on Sunday after nearly a month’s absence from public duties amid health precautions.

The monarch, 95, attended the joint baptism of the sons of Princess Eugenie and Zara Tindall at the Royal Lodge in Windsor Great Park, Berkshire.

After straining her back earlier this month, the Queen pulled out of her duties at the Remembrance Sunday service at the Cenotaph on 11 November.

She returned to official engagements on Wednesday with a face-to-face audience with Gen Sir Nick Carter, the outgoing head of the armed forces. She hosted a reception for business leaders at Windsor on 19 October before the Cop26 climate conference in Glasgow.

The Queen’s absence sparked fears her health was declining less than a year after the death of her husband, Prince Philip, at 99.

“She’s all right, thank you very much,” Prince Charles said on Wednesday, in response to a question about his mother’s health from Sky News. “Once you get to 95, it’s not quite as easy as it used to be. It’s bad enough at 73.”

During Sunday’s ceremony Eugenie’s son, August, and Tindall’s son, Lucas Philip, were christened, with other royals including Prince Andrew and the Duke and Duchess of Cambridge also in attendance.

Meanwhile, the Queen was reported by the Mail on Sunday to be upset with a new BBC documentary, presented by media editor Amol Rajan, over expectations it would report William and his brother, Prince Harry, had briefed the media against one other.

The newspaper cited an unnamed royal source who attacked The Princes and the Press as “tittle-tattle”, expressing anger over the BBC’s refusal to allow the palace an advance viewing.

The source added that Buckingham Palace would refuse to cooperate on future projects unless it is given a right to respond.

Stories of “briefing wars” and wider internal discord within the royal family will probably whip up further culture war antagonism over the monarchy less than two years after the high-profile departure of Harry and his wife, Meghan, who told Oprah Winfrey she experienced suicidal thoughts as a working royal.
Add Comment