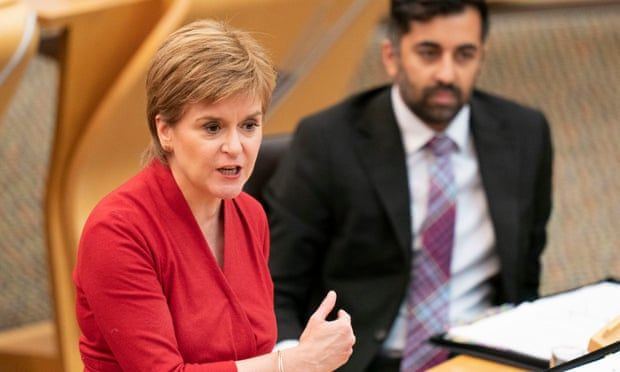 Protesters opposed to transgender rights changes in Scotland booed Nicola Sturgeon outside the Holyrood parliament before the first session of first minister’s questions of the new term.

Marion Calder, co-founder of For Women Scotland, which organised the event, told a crowd of about 350 women and men, many wearing suffragette colours and holding placards reading “save our single-sex spaces” and “sex not gender”, that the protest was a “wake-up call” for MSPs.

Plans to introduce a simplified system by which transgender people can change the sex recorded on their birth certificate – known as self-identification – have polarised opinion since they were first put out to consultation in 2017, and caused a significant rift within the Scottish National party.

Sturgeon has repeatedly said she sees no conflict between her feminism and her support for transgender rights, and has previously committed to “zero tolerance” of transphobia within the SNP.

More than three-quarters of MSPs in the new parliament, from four of the five Holyrood parties, were elected on manifesto commitments to change the Gender Recognition Act (GRA).

The new power-sharing deal between the SNP and Scottish Greens includes a similar commitment to changes within a year and a new pledge to ensure transgender medical procedures are included in the 18-week NHS waiting time target.

But those in the crowd outside the parliament building suggested that the agreement with the Scottish Greens further threatened women’s rights.

Invoking the historic Scottish witch trials, speakers criticised “gender extremists”, while those listening accused the mainstream media of bias or failing to cover in detail what they consider to be the detrimental impact of the proposed legislation on women. They suggested that changes would allow predatory men access to women-only spaces.

Supporters of trans rights formed a smaller group behind the main protest on Thursday. Holding a “feminism is for everyone” placard, Kate West, a bar manager and student, said: “Feminism is intersectional and you don’t get to cherrypick whose rights you support … Women’s rights are not threatened by trans rights.” Those in favour of GRA change also criticised media coverage of the issue.

Vic Valentine, manager of Scottish Trans Alliance, pointed out that trans men and trans women over the age of 18 had been able to change their birth certificate since 2004 “but the current process requires people to provide a psychiatric diagnosis, intrusive medical reports about our bodies, and two years of evidence that we’ve been living as who we know ourselves to be”.

Valentine emphasised that the change in the law “doesn’t impact the spaces or services we use in our day-to-day lives, and plans to change the law would not see trans people gain any new rights we don’t already have”.

Alys Mumford of Engender, a Scottish feminist policy organisation, underlined that the legal change “does not undermine any protections or rights for women in Scotland”.

The protest came as the Scottish government released its analysis of 17,058 responses to its second consultation on GRA changes, 45% of which came from outside Scotland. A small majority of organisations broadly supported changing to a system of statutory self-declaration to change a birth certificate, while the considerable majority of women’s groups and religious bodies were against it.
Add Comment