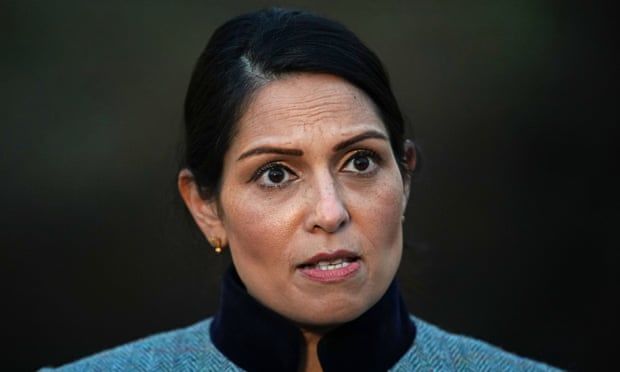 A review into crossbow ownership has been ordered by the home secretary just days after a 19-year-old man was arrested at Windsor Castle on Christmas Day allegedly carrying the weapon.

The Metropolitan police are investigating a video, which has been linked to the suspect, which appears to show a masked figureholding a crossbow and saying they want to “assassinate the Queen”.

A Home Office spokesperson said the department had been instructed by Priti Patel to look at possible ways to “strengthen controls” on the weapons.

The spokesperson said: “Crossbows are subject to controls, and legislation is in place to deal with those who use them as a weapon.

“At the home secretary’s request, we are considering options to strengthen controls on crossbows. Work on this has been ongoing throughout the year, and we keep all relevant laws under review to maintain public safety.”

The man arrested on Christmas Day within the grounds of the castle in Berkshire where the Queen is in residence has been sectioned under the Mental Health Act, the Metropolitan police said.

According to the Daily Telegraph, Whitehall sources said officials had been instructed to “incorporate any lessons” from the arrest into a review of crossbow laws which was ordered earlier this year.

Under current legislation, it is an offence for anyone under 18 to buy or possess a crossbow and for anyone to sell a crossbow to someone aged under 18. Crossbows may also be considered offensive weapons and are prohibited from being carried in a public place without lawful authority or reasonable excuse.

Demands for tighter regulation of crossbows initially came after the five-day inquest into the death of Shane Gilmer in April. The 30-year-old died after his neighbour, Anthony Lawrence, broke into his house in January 2018 and shot him and his partner, Laura Sugden, who survived the attack.

The coroner, Prof Paul Marks, submitted a report to Patel in May in which he said he was concerned there was “no ongoing control, record or licensing requirement for (crossbows)”, unlike firearms.

On Monday the father of the 19-year-old arrested on Christmas Day reportedly told MailOnline: “Something’s gone horribly wrong with our son and we are trying to figure out what.”

“We’ve not had a chance to speak to him but are trying to get him the help he needs,” he said. “From our perspective, we are going through a difficult time. We are trying to resolve this issue and it’s not easy.”
#priti patel
Add Comment