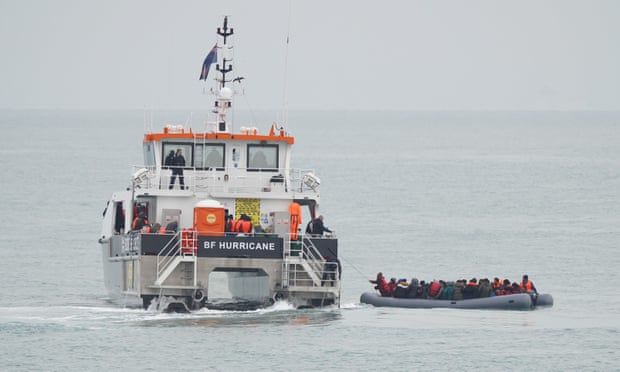 Priti Patel is facing three legal challenges over her controversial plans to push back refugees on small boats in the Channel who are trying to reach the UK.

Several charities including Care4Calais and Channel Rescue are involved in two linked challenges arguing that Patel’s plans are unlawful under human rights and maritime laws. Freedom from Torture is involved in a third challenge.

The Guardian has revealed that government lawyers have warned Patel she is likely to lose any legal challenge against her pushbacks policy.

The first legal challenge, from Care4Calais and another charity, focuses on whether the Home Office has actually formulated a policy on pushbacks. It argues that if such a policy exists it should be published so it can be scrutinised.

The second challenge, from Channel Rescue, a human rights organisation that monitors the situation for refugees crossing the Channel in small boats, focuses on alleged breaches of maritime law – the requirement under the UN convention on the law of the sea is for vessels to provide assistance to those in danger or distress at sea.

The third argues that the turnback policy has no legal basis, authorises unlawful conduct by UK officials and is forbidden by the refugee convention.

Government sources briefed some media outlets in September that a Border Force team had been training for months in preparation for the start of the operation. Days later Channel Rescue volunteers witnessed Border Force officials on jet skis practising turning around dinghies off the coast of Kingsdown in Kent.

Jeremy Bloom, a solicitor at Duncan Lewis representing the charities in the first challenge, said: “The Home Office has widely briefed the press and parliament to say that they have a policy in place that allows them to force boats carrying asylum seekers to leave UK territorial waters. The claimants in this challenge are of the view that any policy is likely to breach the UK’s obligations under international and domestic law, and that any attempts to push back boats may well put the lives of asylum seekers and refugees in real danger.”

Clare Moseley, the founder of Care4Calais, said: “Pushbacks prioritise politics over people’s lives. Refugees are innocent people who were simply unfortunate enough to be born in the wrong place. They are asking for our help. It is inhumane to punish them for this.”

Kim Bryan of Channel Rescue said its volunteers witnessed a practice run by Border Force officials using jet skis to surround a dinghy on both sides and push it from the back. “We believe this is life-threatening and unlawful,” said Bryan. “We have given Home Office until 29 November to respond to our pre-action protocol letter. If we don’t receive a response by then we will issue judicial review proceedings.”

A Home Office spokesperson said: “To protect lives and break the business model of criminal gangs facilitating these crossings it is right that we continue to evaluate and test a range of safe and legal options to find ways of stopping small boats making this dangerous and unnecessary journey.”
#priti patel
Add Comment