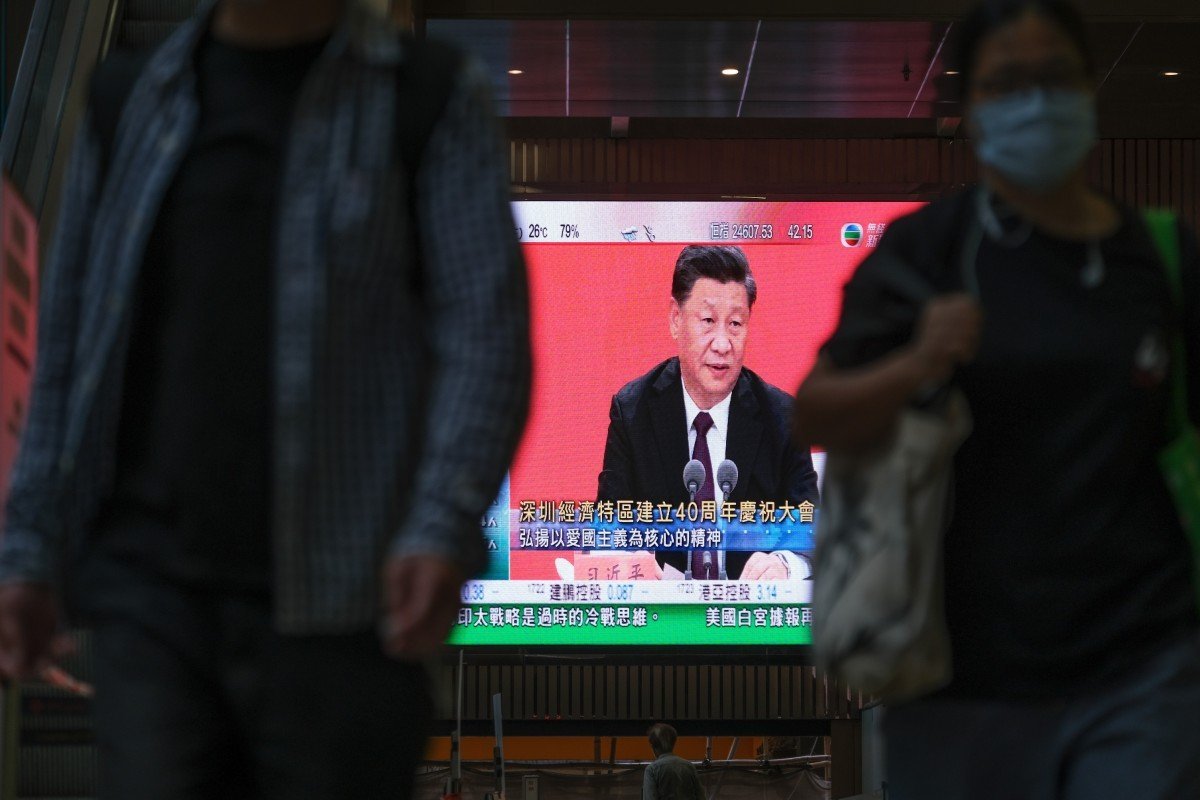 Xi assigns Shenzhen a mission to revitalise ‘one country, two systems’ as he launches new era of integration for southern China.

President Xi Jinping has urged more young Hongkongers to work, study and live in mainland China as he hailed Shenzhen’s role as an “important engine” of the Greater Bay Area project, during celebrations marking the Guangdong city’s 40th anniversary as a special economic zone.

Xi told attendees at the Shenzhen ceremony on Wednesday that the city’s meteoric rise showed what could be achieved through the comprehensive and accurate implementation of “one country, two systems”, referring to the governing principle under which Hong Kong is part of China but promised a measure of autonomy.

“The party has high hopes for Shenzhen … It needs to push forward the bay area plan and enrich the new practices in the implementation of ‘one country, two systems’. These are historic missions that the party is giving to Shenzhen in the new era.”

Under the Greater Bay Area project, Beijing aims to turn Hong Kong, Macau, Shenzhen and eight other Guangdong cities into a technology and finance powerhouse rivalling California’s Silicon Valley by 2035.

During his 50-minute speech in Shenzhen’s Qianhai development zone, the president recounted how the city’s gross domestic product had soared from 270 million yuan in 1980 to 2.7 trillion yuan in 2019, the fifth-highest in Asia.

“Shenzhen has evolved from a backward border town to an influential international metropolis,” he said. “This is a global development miracle that the Chinese people have created together.”

Appearing alongside vice-premiers Liu He and Han Zheng, as well as top officials from Beijing, Guangdong, Shenzhen, Hong Kong and Macau, Xi said the focus on innovation was among the 10 important lessons to learn from the development of Shenzhen as a special economic zone.

Ahead of the president’s speech, the Shenzhen government included four Hongkongers among the 40 people recognised for their contributions to the mainland city’s development over the four decades since it was given the economic designation as part of late paramount leader Deng Xiaoping’s efforts to open China to the world. 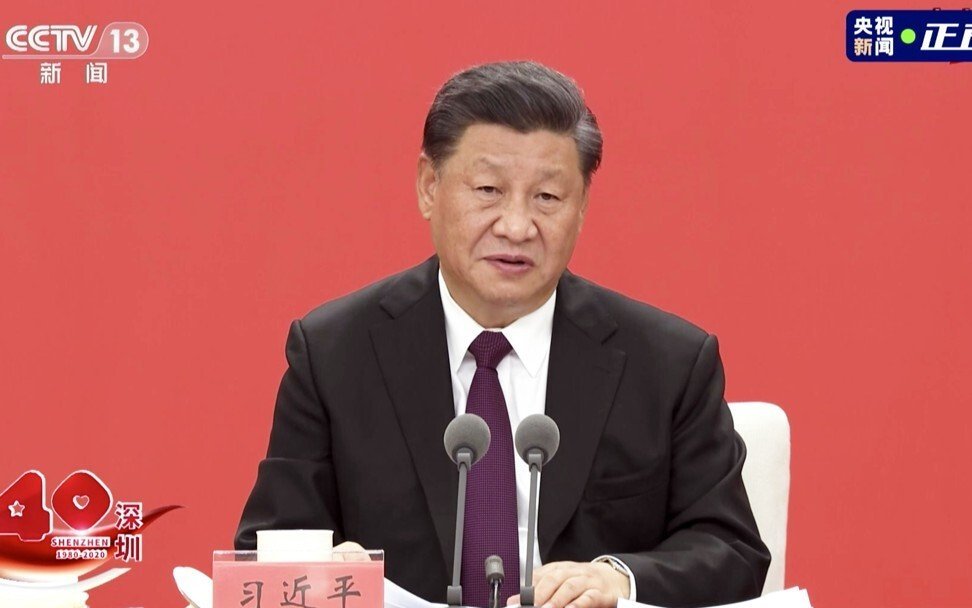 Xi said Shenzhen’s new missions included being the driving force behind the Greater Bay Area, the blueprint for which Beijing rolled out early last year.

“Shenzhen must proactively advance the Greater Bay Area plan, which is a key development strategy of the country, with Shenzhen as an important engine,” he declared.

Xi said the authorities must continue to encourage Hong Kong’s young people and its businesses to seize the various opportunities available on the mainland.

“We must also continue to guide Hong Kong, Macau and Taiwan compatriots, as well as overseas Chinese, to invest in the area.”

Xi made specific reference to the Qianhai development zone, the Hong Kong-Shenzhen Innovation and Technology Park in the Lok Ma Chau Loop in northern Hong Kong, and the Guangdong-Macau cooperation zone in Hengqin, Zhuhai, as he called for the relevant authorities to accelerate their progress.

“We must seize the important and historic opportunity … foster the efficient and convenient flow of people and goods, and improve on the integration of markets.”

In his speech, Shenzhen party secretary Wang also highlighted the cooperation between Hong Kong and the Guangdong city, saying the special economic zone would play an important role in future regional development plans such as the Greater Bay Area.

What does ‘one country, two systems’ mean?

Professor Lau Siu-kai, vice-chairman of the Chinese Association of Hong Kong and Macau Studies, a semi-official think tank based in Beijing, said Xi’s speech showed Hongkongers needed to have a stronger “sense of crisis”.

“The central government now depends on Shenzhen as an engine of the Greater Bay Area and the nation’s development. The role of Hong Kong, due to political reasons, is being weakened,” he said.

“Hong Kong people are resistant to mainland integration, and its government has not been especially keen on helping its young people to embrace opportunities on the mainland,” he added.

“Now, the city’s government must educate its people about the reality, create a sense of crisis ... and a collective consensus that we need to cooperate with the mainland and tap into its market.”

Lau also said that Hong Kong still enjoyed advantages over Shenzhen due to its status as a finance hub and its international nature.

“Shenzhen and Hong Kong need to help each other ... in areas ranging from education and healthcare to shipping,” he said.

“Opportunities in Hong Kong are also too limited for young people, the city’s government needs to help them.”

“We are not just asking them to study, but helping them widen their horizons and broaden their minds. When our youths have a clearer picture of the global competition, they will know Hong Kong’s status as part of China is an undeniable fact.”

But opposition legislator Wu Chi-wai, chairman of the Democratic Party, said it was “ridiculous and laughable” to suggest that Hong Kong youth would be more patriotic if they worked or studied on the mainland.

“When the mainland government suppresses Hong Kong’s freedoms, and Hong Kong young people don’t trust it, how can they be attracted to work or live on the mainland?” he asked.

Professor Terence Chong Tai-leung, an economist at Chinese University, said he believed that, rather than weakening each other, Hong Kong and Shenzhen could grow together as financial hubs.

Dennis Ng Wang-pun, president of the Chinese Manufacturers’ Association of Hong Kong, also concurred that Hong Kong and Shenzhen should be cooperating – not competing – with each other.

Xi, senior party officials and those from Hong Kong and Macau sat apart from each other on stage without wearing masks, while the 800 audience members wore face coverings as they sat shoulder to shoulder.

But the physical gap between Lam, who sat at the far end of the stage, and He Lifeng, head of the National Development and Reform Commission, was wider than between other officials. 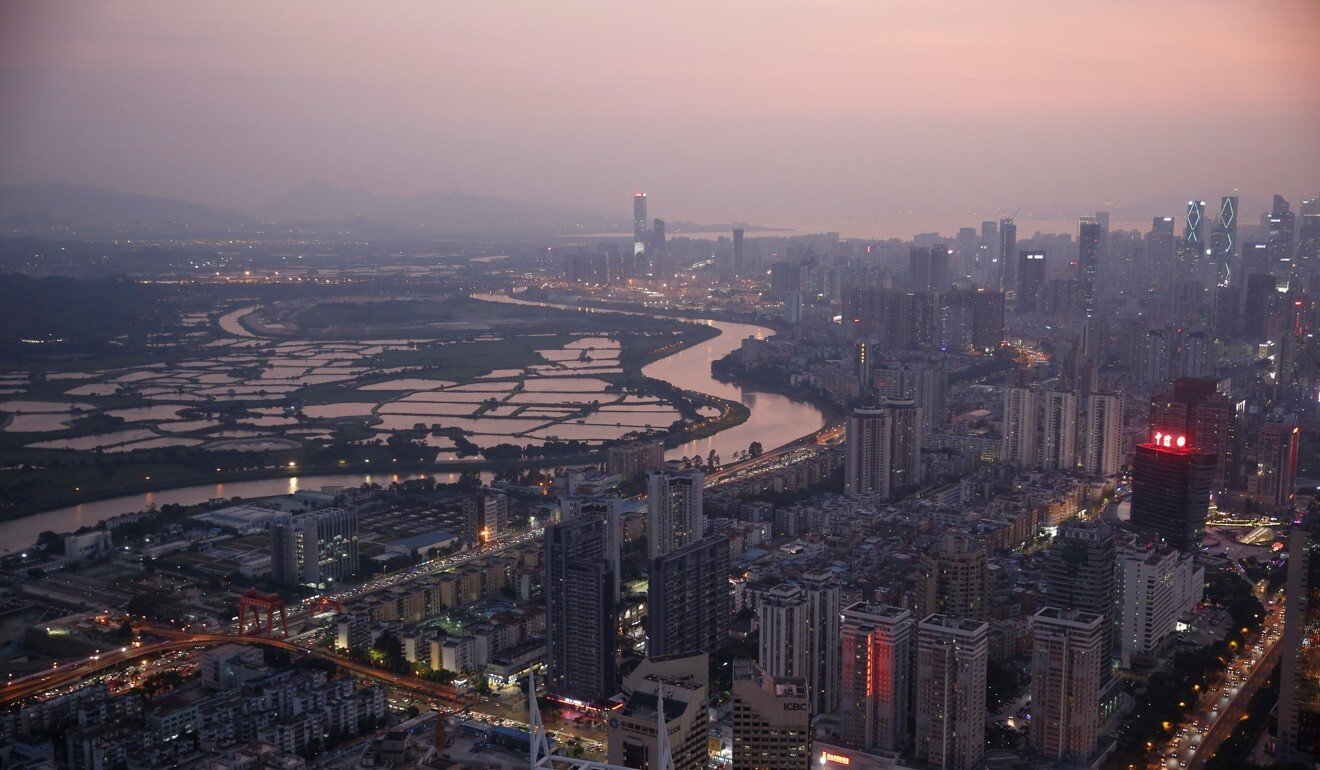 It raised questions among some observers as to whether Beijing officials were concerned about her presence last week at an orchestra performance that included a bass clarinettist who tested preliminary positive for the coronavirus on Tuesday.

But Lau Siu-kai believes those concerns were unwarranted.

“If officials were worried, she would not have attended the ceremony,” he said.

A spokesman for Lam’s office later said the chief executive had tested negative for coronavirus.

After the ceremony, Xi was accompanied by Shenzhen city officials, along with Lam, Leung Chun-ying and Tung Chee-wa, as he visited an exhibit about the mainland city’s rise.

Xi also took a large group picture with Leung, Tung and about 100 other guests at the ceremony.