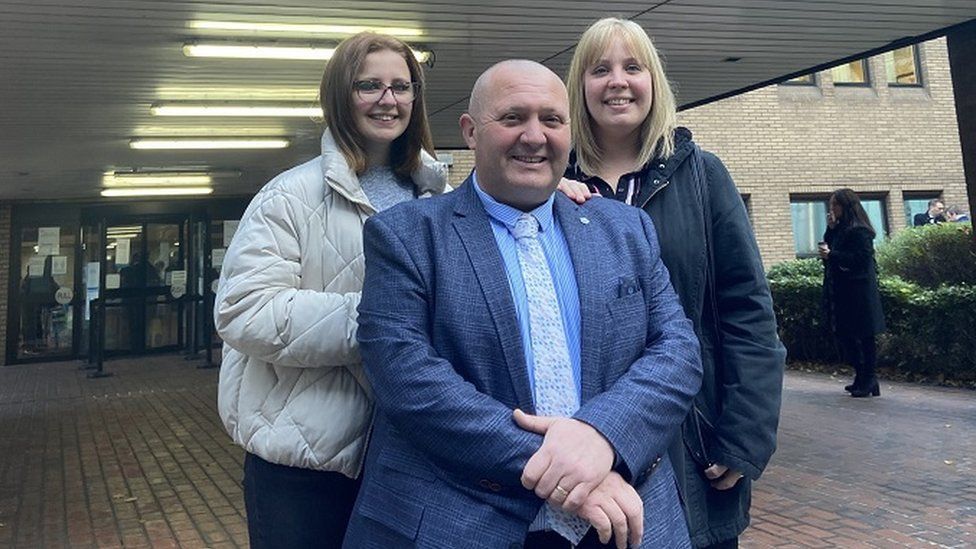 A former Post Office worker who has waited 15 years for justice is celebrating today with "a nice cup of tea".

Anthony Gant, of Newtown in Powys, was wrongly convicted of false accounting back in 2007, when software showed his branch to be short of more than £14,550.

He was one of six more former Post Office workers to have their criminal convictions overturned at Southwark Crown Court on Thursday.

Mr Gant was supported by his wife Kirsty and step-daughter Megan.

"It feels absolutely fantastic," Mr Gant told the BBC. "It has been a very strange 15 years."

He'd initially taken on running the Post Office's Nantoer branch after giving up a stockbroking job in London to return to Wales.

"I loved working with the public, I loved helping people," Mr Gant said. He and his family also ran the local pub as well as volunteering with local rugby coaching. He was left in utter disbelief when the sums stopped adding up each week.

"I thought it was a mistake. I was making good the losses myself, topping it up. I was drawing out money on credit cards, but in the end I had no funds to keep doing it," Mr Gant explained. "I buried my head in the sand."

The Post Office prosecuted 736 of its subpostmasters and subpostmistresses between 1999 and 2015, based on information from the Post Office's in-house accounting system called Horizon, which was provided by Fujitsu.

But it was the software at fault, containing "bugs, errors and defects" according to the High Court judgement which quashed many of the convictions.

Some subpostmasters were fined and others were sent to prison. Almost all suffered financial ruin, social stigma and mental ill-health after they were prosecuted.

The conviction has hung over Mr Gant; every job application, every insurance quote. He and his wife worried when they looked into adopting a child.

Getting the conviction quashed today will mean the world to his family. "We'll be heading back to Wales for a big celebration," he said.

Solicitor Neil Hudgell, who has been acting for subpostmasters, said: "It has been another significant few days for those affected by the Horizon scandal, firstly for more of our clients in fighting for and securing justice after so long, and secondly for all who are seeking complete transparency and accountability through next year's public inquiry.

"Having set out to support subpostmasters almost two years ago and to challenge every unsafe conviction, it is very pleasing for us as a law firm to have now surpassed 50 cases in which convictions have been overturned. We hope there are many, many more to come."

A scheme, backed by the government, has been set up to arrange financial redress and compensation for those affected. As of June, 400 payments had been made to those affected.

A Post Office spokesperson said: "While we cannot change the past, we have taken determined action to ensure there is appropriate redress and have undertaken wholesale reforms to prevent such events ever happening again.

"Ahead of final compensation, we are expediting offers of interim payments of up to £100,000 to people whose convictions have been overturned where the reliability of Horizon data was essential to the prosecution."

To date 65 Horizon convictions have been overturned.

These latest convictions being overturned come as the man in charge of the public inquiry into the scandal seeks information from the Post Office.

Sir Wyn Williams is chairing the independent public inquiry tasked with getting to the bottom of why the Post Office brought so many of its employees to court, and why it fought against the overturning of those convictions for decades.

The Post Office had big legal teams working for them throughout the process, and Sir Wyn wants to see records of conversations between the Post Office and its lawyers to find out what was going on behind the scenes.

Those documents are protected by what's known as legal professional privilege, but Sir Wyn has asked the Post Office to give up that right.

The government and Fujitsu have said that's fine. The Post Office has been more cautious, saying it is willing "in principle" to waive that right, but not necessarily in every circumstance.

However, Sir Wyn has said if there is anything withheld by the Post Office that he considers relevant he may force them to reveal it publicly.

Many of the victims of this huge miscarriage of justice are seeing that as a sign that this might be an inquiry they can trust.