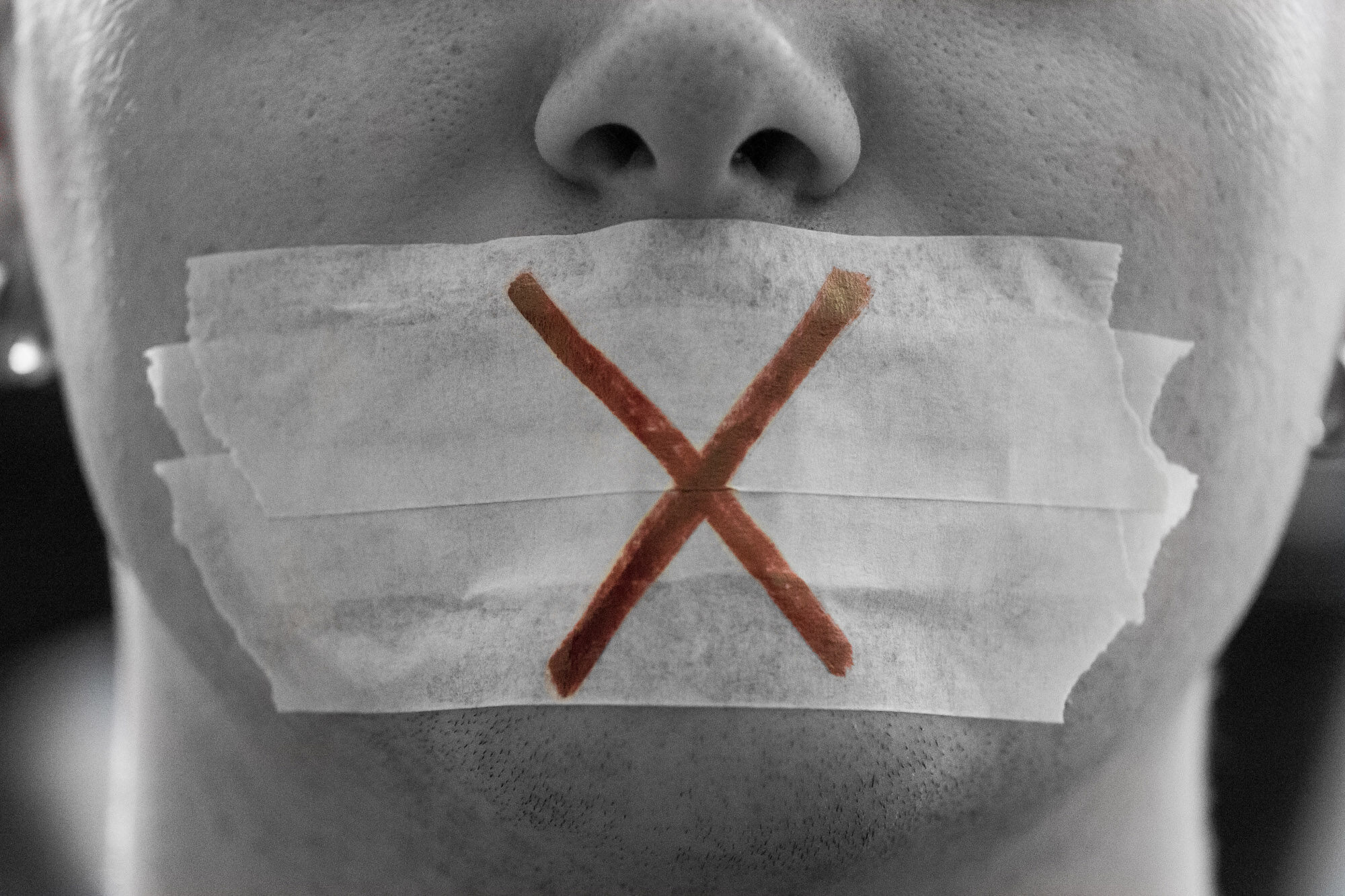 Poll: 62% of Americans Say They Have Political Views They’re Afraid to Share

A new Cato national survey finds that self‐​censorship is on the rise in the United States. Nearly two-thirds—62%—of Americans say the political climate these days prevents them from saying things they believe because others might find them offensive. The share of Americans who self‐​censor has risen several points since 2017 when 58% of Americans agreed with this statement.

These fears cross partisan lines. Majorities of Democrats (52%), independents (59%) and Republicans (77%) all agree they have political opinions they are afraid to share.

Liberals Are Divided on Political Expression

Strong liberals stand out, however, as the only political group who feel they can express themselves. Nearly 6 in 10 (58%) of staunch liberals feel they can say what they believe. However, centrist liberals feel differently. A slim majority (52%) of liberals feel they have to self‐​censor, as do 64% of moderates, and 77% of conservatives. This demonstrates that political expression is an issue that divides the Democratic coalition between centrist Democrats and their left flank. 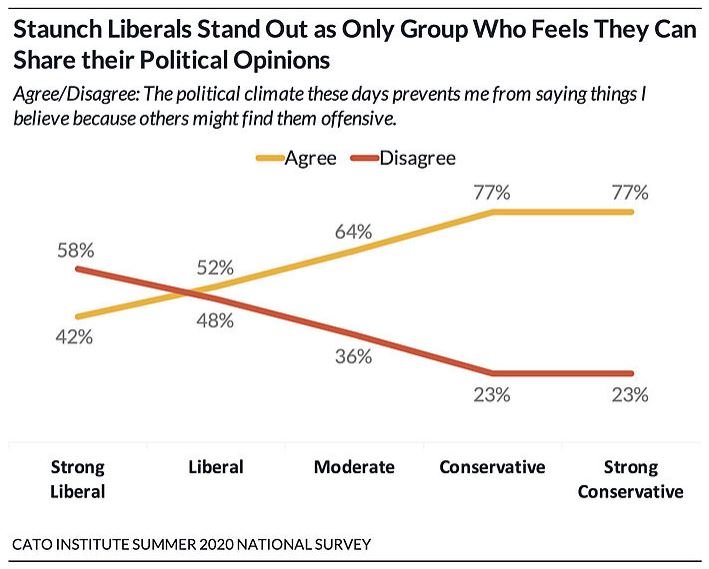 What’s changed? In 2017 most centrist liberals felt confident (54%) they could express their views. However today, slightly less than half (48%) feel the same. The share who feel they cannot be open increased 7 points from 45% in 2017 to 52% today. In fact, there have been shifts across the board, where more people among all political groups feel they are walking on eggshells. 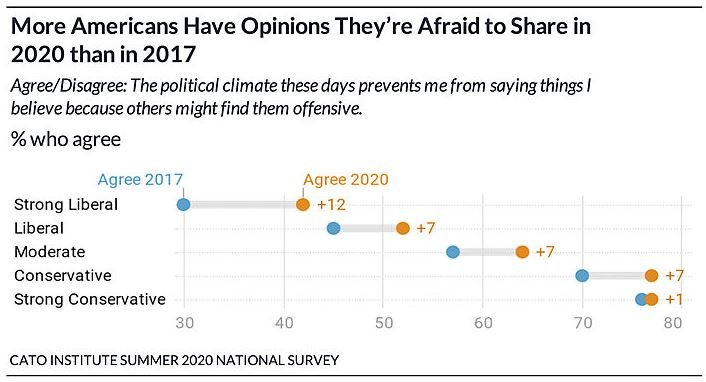 Although strong liberals are the only group who feel they can say what they believe, the share who feel pressured to self‐​censor rose 12 points from 30% in 2017 to 42% in 2020. The share of moderates who self‐​censor increased 7 points from 57% to 64%, and the share of conservatives rose 70% to 77%, also a 7‐​point increase. Strong conservatives are the only group with little change. They are about as likely now (77%) to say they hold back their views as in 2017 (76%).

Self‐​censorship is widespread across demographic groups as well. Nearly two‐​thirds of Latino Americans (65%) and White Americans (64%) and nearly half of African Americans (49%) have political views they are afraid to share.

The survey found that many Americans think a person’s private political donations should impact their employment. Nearly a quarter (22%) of Americans would support firing a business executive who personally donates to Democratic presidential candidate Joe Biden’s campaign. Even more, 31% support firing a business executive who donates to Donald Trump’s re‐​election campaign.

Support rises among political subgroups. Support increases to 50% of strong liberals who support firing executives who personally donate to Trump. And more than a third (36%) of strong conservatives support firing an executive for donating to Biden’s presidential campaign.

Young Americans are also more likely than older Americans to support punishing people at work for personal donations to Trump. Forty‐​four percent (44%) of Americans under 30 support firing executives if they donate to Trump.

This share declines to 22% among those over 55 years old—a 20‐​point difference. An age gap also exists for Biden donors, but is less pronounced. Twenty‐​seven percent (27%) of Americans under 30 support firing executives who donate to Biden compared to 20% of those over 55—a 7‐​point difference.
32% Worry Their Political Views Could Harm Their Employment 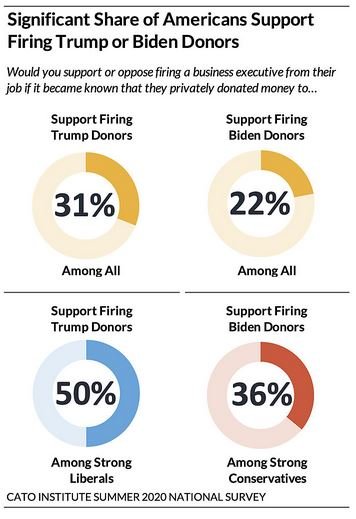 32% Worry Their Political Views Could Harm Their Employment

Nearly a third (32%) of employed Americans say they personally are worried about missing out on career opportunities or losing their job if their political opinions became known. These results are particularly notable given that most personal campaign contributions to political candidates are public knowledge and can easily be found online.

And it’s not just one side of the political spectrum: 31% of liberals, 30% of moderates and 34% of conservatives are worried their political views could get them fired or harm their career trajectory.

This suggests that it’s not necessarily just one particular set of views that has moved outside of acceptable public discourse. Instead these results are more consistent with a “walking on eggshells” thesis that people increasingly fear a wide range of political views could offend others or could negatively impact themselves.

Some are more worried about losing their jobs or missing out on job opportunities because of political views. Those with the highest levels of education are most concerned. Almost half (44%) of Americans with post‐​graduate degrees say they are worried their careers could be harmed if others discovered their political opinions, compared to 34% of college graduates, 28% of those with some college experience, and 25% of high school graduates 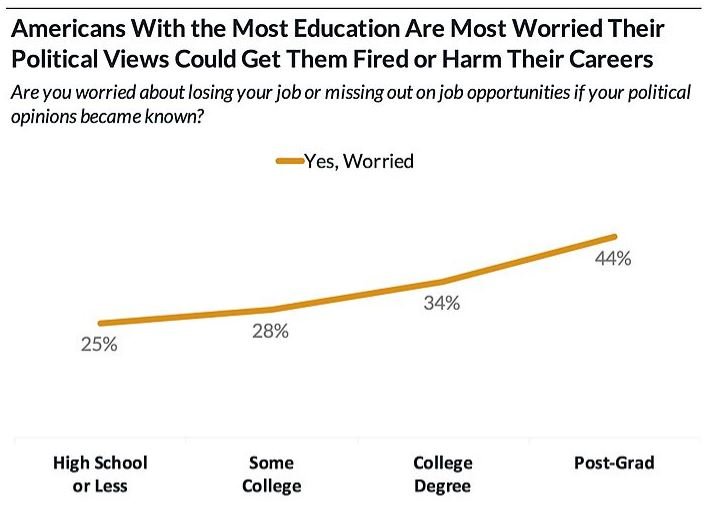 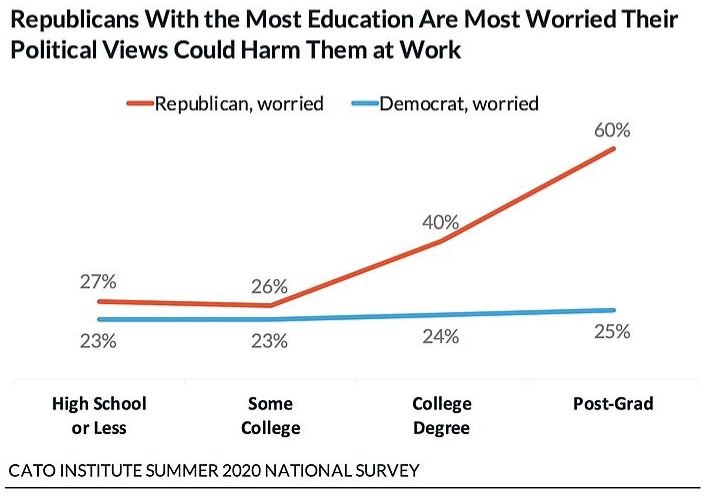 But this educational divide appears largely driven by partisanship. Democrats with graduate degrees (25%) are about as likely as high school graduates (23%) to be worried their political views could harm their employment.

However, a major shift occurs among Republicans who attend college and graduate school. About a quarter of Republicans with high school degrees (27%) or some college (26%) worry their political opinions could harm them at work—but this number increases to 40% among Republican college graduates and 60% of those with post‐​graduate degrees.

A similar trend is observed among independents. The share of independents who have these concerns increases from 18% among high school graduates, to 35% among those with some college, 41% of college graduates, and 49% of post‐​graduates.

Younger people are also more concerned than older people, irrespective of political viewpoint. Examining all Americans under 65, 37% of those under 30 are worried their political opinions could harm their career trajectories, compared to 30% of 30–54 year‐​olds and 24% of 55–64 year‐​olds. But the age gap is more striking taking into account political views.

These data suggest that a significant minority of Americans from all political persuasions and backgrounds—particularly younger people who have spent more time in America’s universities—are most likely to hide their views for fear of financial penalty.

A particularly surprising finding was that Americans who have these concerns are somewhat more likely to support the firing of Biden or Trump donors. A third (33%) among those who worry that their political views could harm their employment supported firing either Biden or Trump donors, compared to 24% of those who were not worried about their views impacting their jobs. This suggests that those who fear reprisal or economic penalty for their political views are not entirely distinct from those who seek the same for others.

Taking these results together indicates that a significant majority of Americans with diverse political views and backgrounds self‐​censor their political opinions. This large number from across demographic groups suggests withheld opinions may not simply be radical or fringe perspectives in the process of being socially marginalized.

Instead many of these opinions may be shared by a large number of people. Opinions so widely shared are likely shaping how people think about salient policy issues and ultimately impacting how they vote. But if people feel they cannot discuss these important policy matters, such views will not have an opportunity to be scrutinized, understood, or reformed.