Police are spending too much time taking care of societal problems and are not tackling enough crime, the UK lead for neighbourhood policing says.

Chief Constable Olivia Pinkney says officers can spend half their shifts working on behalf of other services.

As a result, crime victims are being "failed" and the criminal justice system is now in "crisis", she says.

It comes as BBC News has revealed police are taking longer to respond to crimes and are charging fewer suspects.

Our reports have heard from victims who say they have had to turn detective to solve their own crimes. We also visited one cul-de-sac where there have been 10 burglaries on the street, or in neighbouring streets, in a year-and-a-half.

We asked the National Police Chief Council to respond to our findings.

Ms Pinkney, chief constable of Hampshire and the Isle of Wight Constabulary, says she wants all officers to be freed from attending incidents that "are not for the police service to lead upon".

On average, she says officers attend 54 mental health incidents every hour and spend three hours waiting with people before health professionals then take over.

"Come and sit in a police control room at half past three on a Friday afternoon, and the number of calls that come in and say 'we haven't been able to resolve this in health, in children's social care, so we'd like the police to own this risk until Monday'", she says. 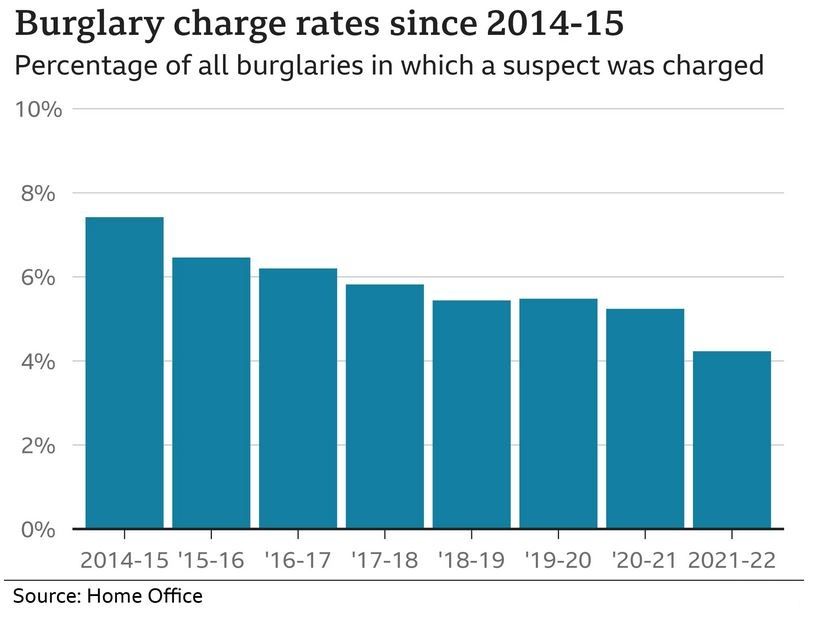 She says a recent recruitment of new officers will help the situation, but says many of these are "replacements" and some forces are still 15% down on numbers compared to 2010.

However, Ms Pinkney told BBC News "it's not just a numbers game" and an honest public debate is needed about policing.

"How do you want your police service to operate? We need to work out, are the police there for fighting crime? Absolutely, yes. But the police are also there to protect those in need and what does that balance look like?

"Right now, that is an enormous mission for policing and it's not getting any lighter anytime soon."

A Home Office spokesperson said: "Our absolute priority is to get more police onto our streets, cut crime, protect the public and bring more criminals to justice.

"We are supporting police by providing them with the resources they need, including recruiting 20,000 extra police officers."