Scotland joined the UK-wide tribute to the Queen on Sunday evening, ahead of her state funeral on Monday.

The national moment of reflection took place at 20:00.

People were encouraged to observe a one-minute silence to remember the Queen, privately at home, on their doorstep or street, or at community events and vigils.

Scotland had several events planned to mark the moment and the monarch's great affection for the country.

At Westminster, Big Ben tolled to start the beginning of the national moment of reflection before being struck once more at 20:01 as it ended.

But laments were already marked by lone pipers at several locations north of the border.

At 18:00 they played The Immortal Memory at four sites: 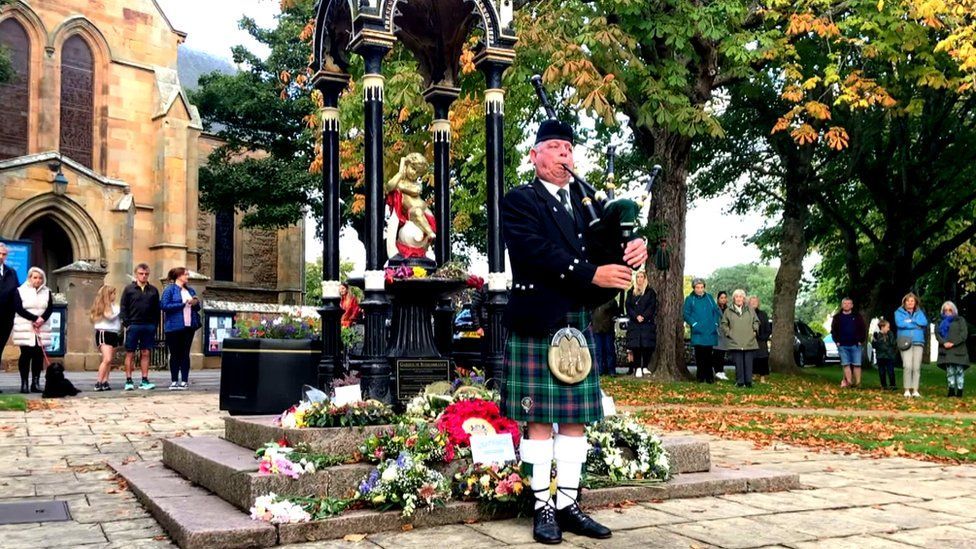 He said: "The national moment of reflection has been a dignified way for many of us to pay our respects to the Queen, whether in our own homes or at public events, by observing a minute silence.

"In reflecting on Her Majesty's life and legacy, many of us have considered her long and valued service to the nation and the respect and admiration she had for the people of Scotland.

"These feelings were reciprocated, and will remain long after we pay our final respects to the Queen as part of tomorrow's state funeral."

First Minister Nicola Sturgeon is in London to attend the state funeral on Monday. 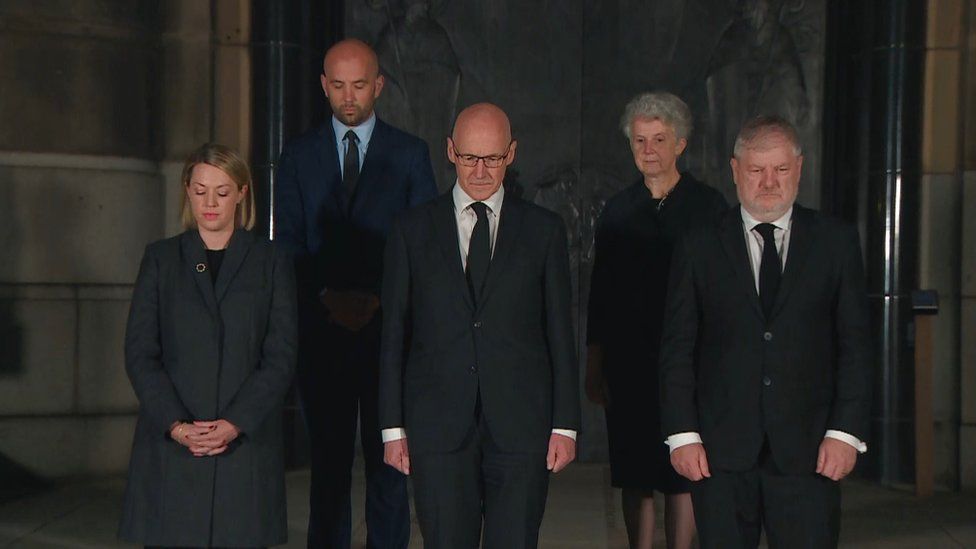 A larger "service of reflection" took place at The Kelpies in Falkirk.

The ceremony saw 96 lanterns - one for each year of the Queen's life - being lit and lowered into the Kelpies pool of reflection.

Local wreaths were floated in the water and lone piper Euan Thomson played 'A Salute to Her Majesty Queen Elizabeth II'.

The event was led by former Moderator, Very Rev Martin Fair and incorporated the national silence.

The Queen and Prince Philip had visited the a new section of the Queen Elizabeth II Canal in July 2017, built as part of the £43m Helix project. 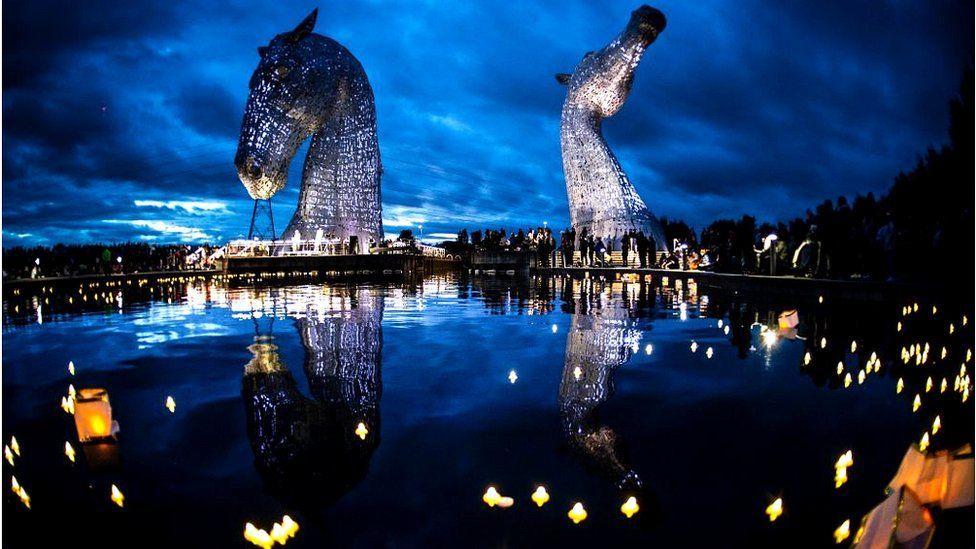 Catherine Topley, chief executive of Scottish Canals told BBC Scotland: "It is fitting we hold the remembrance here. The Queen and her family have been known to visit the canals and in 2017 she opened the Queen Elizabeth II canal.

"So it's a tribute to her tonight, taking a moment to reflect and remember our Queen."

In Braemar - which was at the centre of the early mourning events - a short ceremony was held including a lone piper who played The Flowers of the Forest - the tune played at the Duke of Edinburgh's funeral. 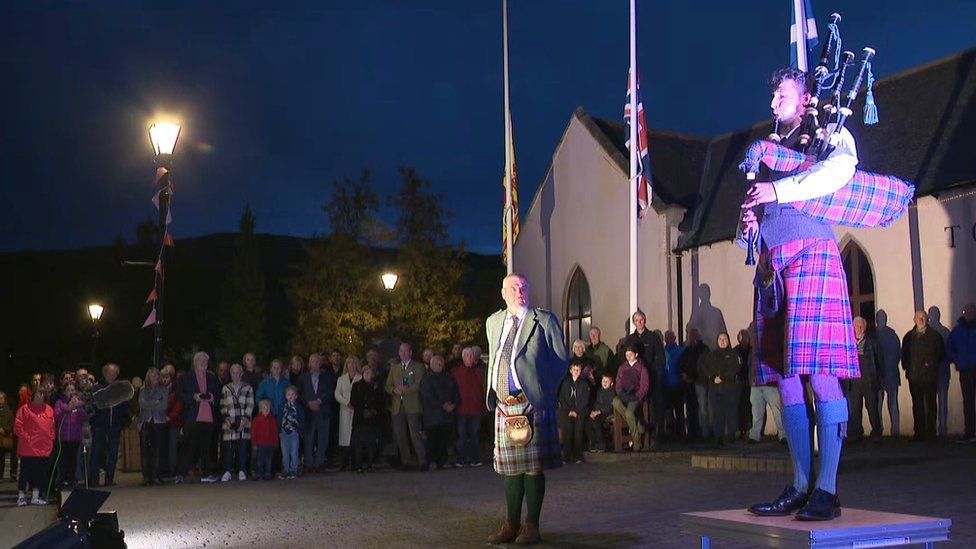 In Braemar, a piper played the same tune performed at the Duke of Edinburgh's funeral

Local resident Colin Hunter said: "I think people will do different things this evening, some will want to be at home with their families, but we thought with the links of the community to the royal family, the Royal Highland Society here which runs the annual games and the community council thought it appropriate to allow the villagers to get together for that important moment.

"Our memories as a village very much relate to the gathering. We have pictures going back 80-90 years of her attending.

"Others have personal memories because they have worked at Balmoral or met the Queen either formally or informally because it was quite common for us to bump into her." 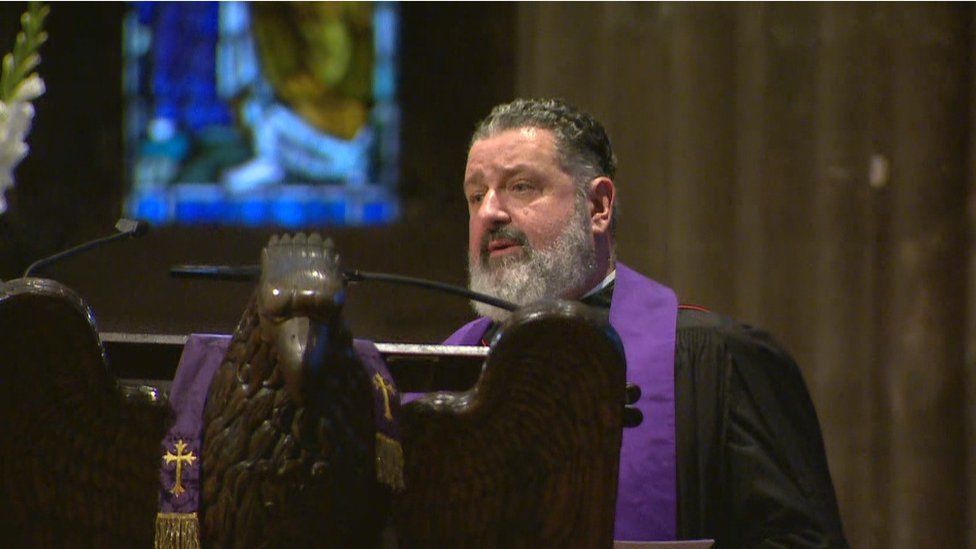 In Glasgow, Rev Mark E Johnstone began a Service of Preparation at Glasgow Cathedral ahead of the silence.

He said: "It weighs heavily on our hearts and minds and within this ancient building we have the opportunity to reflect and prepare ourselves as we, with a nation, engage through the mystery of worship in what it means to give thanks and lay to rest."

Scottish Secretary Alister Jack paid tribute to the Queen after the national moment of reflection, and said the past few days had shown how much she "meant to people in Scotland".

"From Balmoral all the way to Edinburgh, Scots turned out in droves to pay their respects, give thanks for the Queen's lifetime of service and mourn her passing," he said.

"Tomorrow will be a day of unbearable sadness for our nation as Her Majesty is laid to rest. Our thoughts will be with our new King, Charles III, and the rest of the royal family."

Tennis Fans at the Emirates Arena in Glasgow fell silent for a minute at the Davis Cup group D match between Great Britain and Kazakhstan.

An image was beamed on the big screen as the moment was marked. 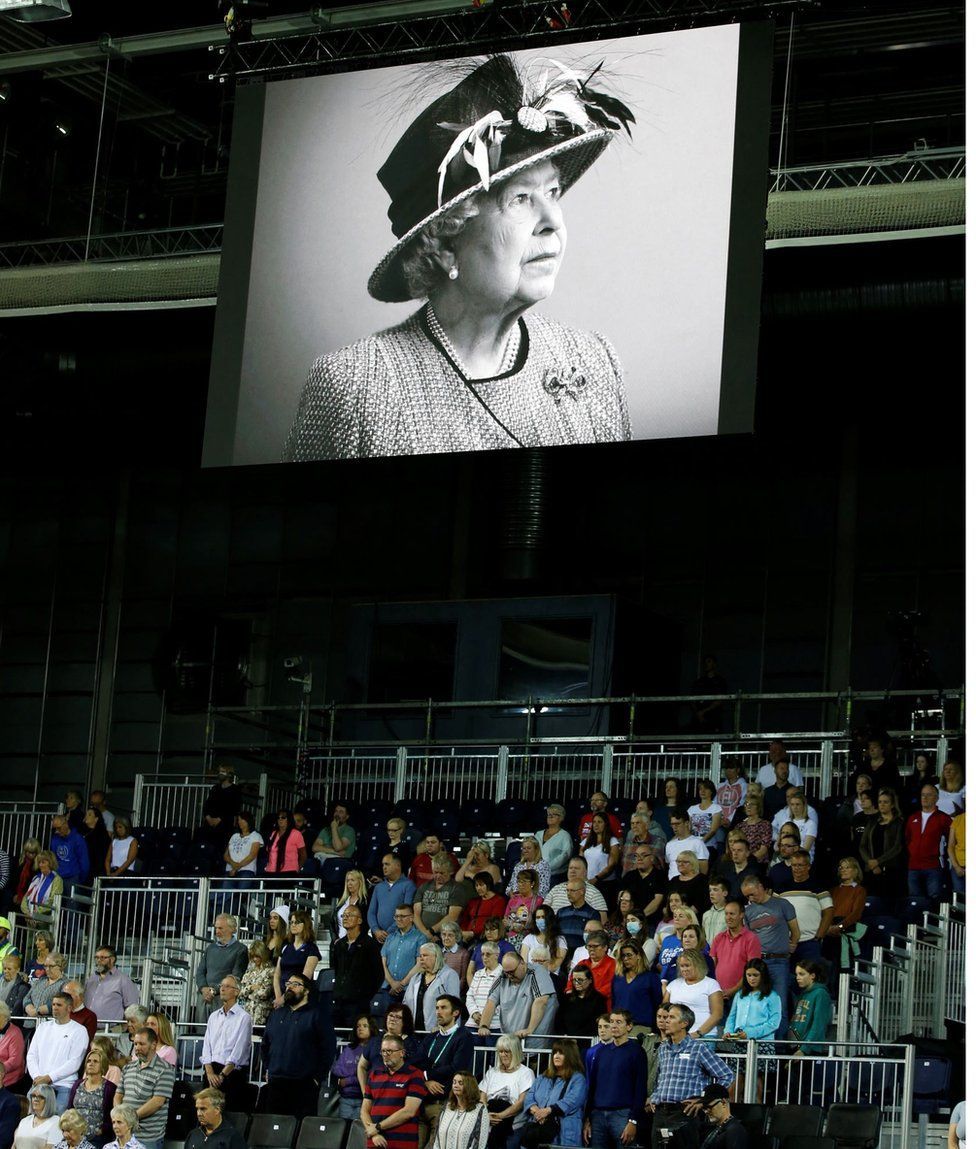 In Edinburgh, a brief service was held before the silence at Canongate Kirk on the Royal Mile. 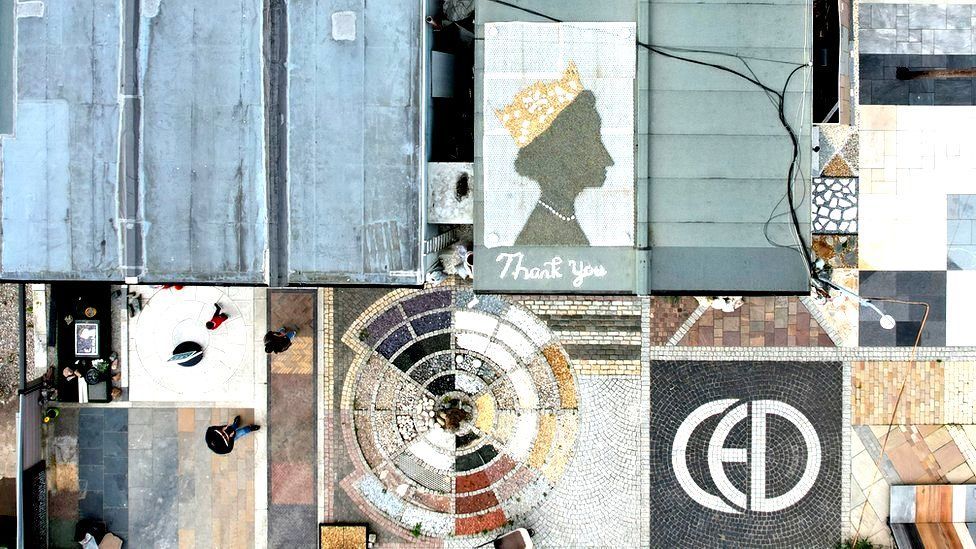 The Scottish government said that communities groups, clubs and other organisations across Scotland were also encouraged to take part.

Emily Cowan from Allandale, near Bonnybridge, put together her own tribute at her workplace, CED Stone Scotland.

She used different aggregates and pebbles to make a 4.8m (15.7ft) by 3.2m (10.5ft) picture of the Queen's profile on the roof of an office building which can be seen on the flight path to Cumbernauld Airport.