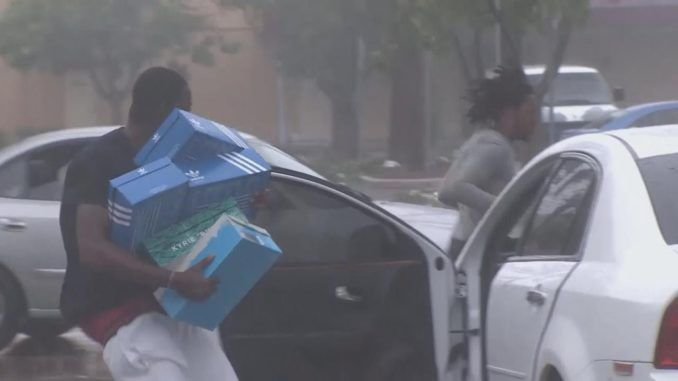 Philadelphia Looter finds their car destroyed by other looters

A looter in Philadelphia learnt a major life lesson when her own car full of looted products was looted by other looters overnight.

“This looting shit is not worth it,” the reformed looter says on camera. “Why would they do this to our car? They f***ed us up. Threw all the sh*t out the car. They got us good, like, it’s not worth it.“

Now she knows how the business owners feel who have had their livelihoods attacked and damaged by protesters and looters. It’s a “learning moment“.

The madness of the Black Lives Matter movement and their cheerleaders in the corporate media must be called out. Fox News reported last night that 70% of the businesses destroyed by looters in Philadelphia were owned by minorities.

The violent movement has been emboldened by the corporate media propaganda campaign waged on their behalf, and they now believe they are above the law.

bill c 22 days ago
all the damage by the looters will probably be a few 100 millions dollars.......thats sad. The gathering at Sturgis bike rally will probably inflict more than 12 billion in damages to out nation economically.......thats criminal.

Oh y 22 days ago
It should be legal for anyone to shoot looters on site. A few good people on rooftops making heads explode would convince the others to stay home and watch TV
View all comments (5)Add comment