The Civil Defense Directorate has urged the public to take utmost vigil and caution while venturing out during rain amid a forecast of moderate to heavy rain likely to hit many parts of the Kingdom from Wednesday until Sunday.

Peru’s Prime Minister Anibal Torres has resigned, amid a widening criminal investigation focused on the nation’s president, President Pedro Castillo, who has grown increasingly isolated after one year in office.

Torres, a lawyer and one of Castillo’s most loyal allies, said in a letter shared on social media on Wednesday that he was resigning due to “personal reasons”.

“I am withdrawing from office after having served our homeland and its most neglected and its forgotten people, together with you.” he wrote in the resignation letter addressed to Castillo.

“Today I have to return to the university classrooms with my students, and take up what I missed the most: legal research.”

Castillo, who took office a year ago, has overseen unprecedented turnover in senior government posts during his administration. He will now have to name his fifth prime minister since taking office last July, a move that often comes with other changes to the cabinet.

The president is also the target of five criminal investigations, including two that are probing whether he is part of a “criminal organisation”. According to Peruvian law, presidents can be investigated while in office, but cannot be charged.

Castillo’s critics have seized on news of the prime minister’s resignation.

“It gives the impression that he is exhausted politically and physically; and he no longer even wants to continue in office,” Jorge Montoya, the leader of the ultra-conservative Popular Renewal party, told local news outlet RPP Noticias.

Castillo, 52, came to power last year with a Marxist-Leninist party, initially causing panic among investors, but he has since taken a pragmatic moderate turn, keeping the key economy ministry in the hands of a technocrat.

He had campaigned with the slogan “no more poor in a rich country”. He promised to fight corruption, raise taxes on mining profits, rewrite the constitution and end alleged monopolies that affect the prices of domestic gas and medicine.

But he was met by a Congress that analysts say has been eager to continue the political squabbling that has seen prior presidents and lawmakers seek to cut short each other’s terms.

In 2019, then-President Martin Vizcarra dissolved Congress and called legislative elections. The following year, the new Congress removed Vizcarra. Manuel Merino was appointed as president by Congress but resigned less than a week later following deadly protests. He was succeeded by Francisco Sagasti, who after nine months handed the post to Castillo on July 28, 2021. 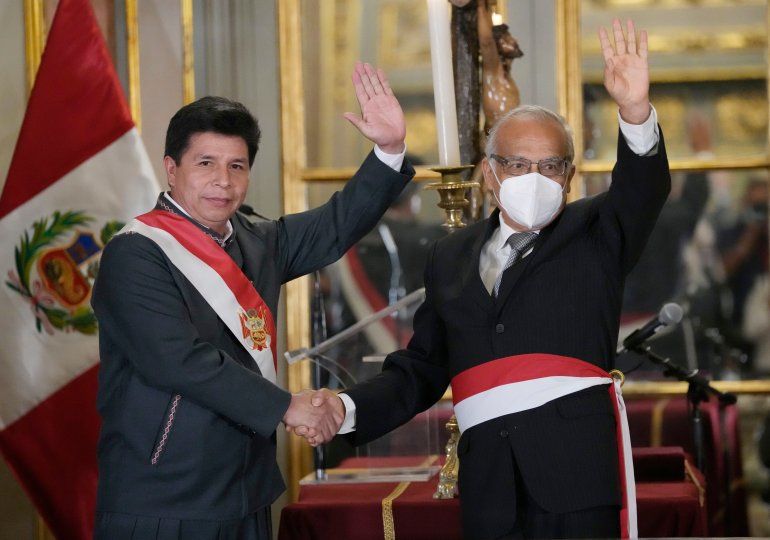 In his resignation letter, Prime Minister Anibal Torres (right), who is a lawyer, said that he wanted to focus on teaching and legal research

On two occasions, lawmakers also tried to dismiss Castillo for purported moral incapacity but did not reach the necessary 87 votes to move forward.

Congress also has shelved Castillo’s proposed steps for constitutional reform. But the president himself has not introduced a detailed agricultural overhaul that was among his top campaign promises.

Castillo’s popularity has plummeted. Only about 19 percent of Peruvians approve of the job being done by Castillo, who defeated Keiko Fujimori in the runoff by about 44,000 votes. But that is higher than the 12 percent rating for Congress, according to polls by the Institute of Peruvian Studies.

Torres has yet to address the resignation or say when he will name a replacement.