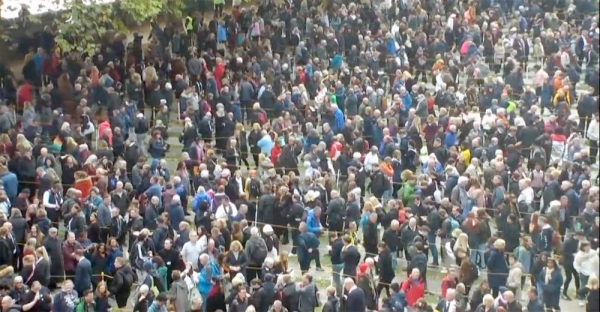 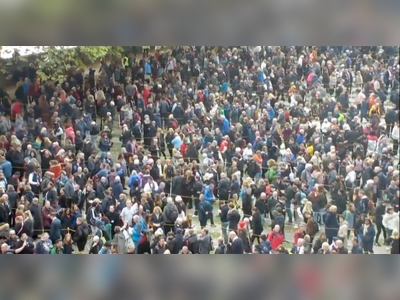 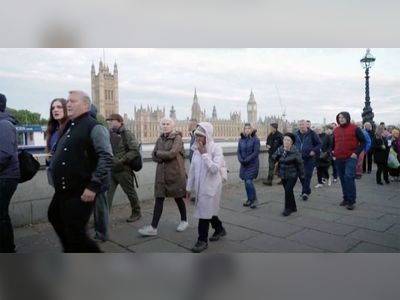 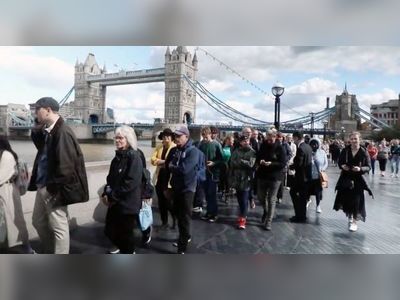 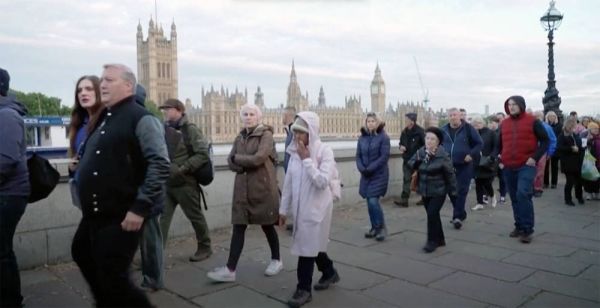 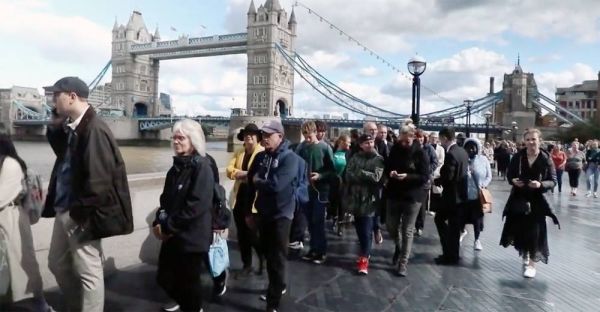 People have been urged not to join the queue to see the coffin of Queen Elizabeth II on Saturday, with waiting times hitting 24 hours at one point.

Tens of thousands of mourners have spent huge amounts of time queuing to see the late monarch as she lies in state at Westminister Hall in London.

At 1:00 a.m. on Saturday, the UK Department for Culture tweeted: "Please do not travel", saying it would pause entry to the queue if demand became too high. New people were prevented from joining the line the previous day.

The vast line has varied in size since the Hall was opened to the public on Thursday. It currently stretches around eight kilometers from Westminster to Southwark Park in south London.

As of Saturday afternoon, those wishing to see the late monarch faced an estimated waiting time of 14 hours. Those on Albert Embankment had a surprise visit from the King and Prince William.

In Southwark Park, some 2,000 people were joining the queue every hour. It is not known how many are in the queue in total or how many people have filed past the Queen. Estimates before the lying-in-state began put the number at 350,000.

The lying-in-state ends at 6:30 a.m. on Monday, but the queue will close to newcomers before then, though it is not yet known exactly when.

Euronews spoke to one family who spent nine hours driving and queuing to pay their respects to the Queen on Thursday.

Debbie Tibbert, 58, along with her husband, son and a German exchange student who is currently staying with their family, said there was a sense of camaraderie and jovial atmosphere in the crowds.

They set off from Wiltshire, southwest England, at 4:00 a.m. on Thursday, driving three and a half hours to reach cloudy London.

After queuing for five and a half hours, which she said "was not too bad at all," Tibbert finally got the chance to "pay her respects", solemnly filing past Elizabeth II in Westminster Hall — the oldest part of the House of Commons.

"She [the Queen] was one special lady that we want to say thank you to," said Tibbert, adding that she had "always loved" the Royal Family and came from a line of Royalists.

In the long, winding queue Tibbert said everyone was "very chatty" and "together," however as they climbed the steps into the Hall a "dignified" silence descended.

"It was really, really beautiful," she said. "None of us knew her personally, but it feels like a personal loss. She [the Queen] has always been there in our lives, serving us, dedicating her life to us, and it is really hard to not see her around anymore."

"My son said to me it feels like the world has lost a mother."

Speaking to Euronews in the car on her way back from London, Tibbert said the whole family were very tired now and looking forward to "putting their feet up".

The volume of mourners was so large come Thursday morning that the UK government launched a live online queue tracker on Youtube, which displays waiting times and the location of the queue.

Others went to view the spectacle of the queue, something not seen in London's recent history.

"It was quite nice," said Kit Heren, a senior reporter at Southwark News, who mingled with the crowds in Bermondsey earlier Saturday. "Everyone seemed really friendly and happy to be there."

"It wasn't like a mournful atmosphere as you might think, it was kind of jolly," he added.

While the demographic was more skewed towards older people, Heren told Euronews many younger people had also turned out to pay their respects to the monarch, helping "bring a sense of community".

The Queen's funeral has become a "national event," continued Heren. "There is a sense among people that they are participating in something that is once in a three or four generation event."

"People want to look back and say I was there," he added.

The event has been well-managed so far, with several hundred stewards on hand to manage the crowds and ensure no one pushes in.

Some stewards were reportedly facing very long working hours, starting at 6:30 and ending at 19:00 that same evening, though some of those on site were in high spirits.

Tibbert said she was "hopeful" for the new monarch, King Charles III. "I think he's going to be really good," she said. "Well, hopefully, he's been waiting in the wings for a long time."

Born in 1948, King Charles, the Queen's eldest son, was the UK's longest-ever king-in-waiting, looking at the throne for decades before he could finally ascend onto it.

Buckingham Palace released details of plans for the Queen's funeral on Monday.

It will be the first state funeral held in the UK since the death of former Prime Minister and wartime leader Winston Churchill in 1965.

Royalty and heads of state from around the world are expected to be among the 2,000 people attending the Westminster Abbey funeral service on Monday.

A smaller burial service is planned for later that day at Windsor Castle.

Queen Elizabeth II died on Sept. 8 at Balmoral aged 96. She was the longest-serving monarch in UK history, reigning for 70 years.
#prince william