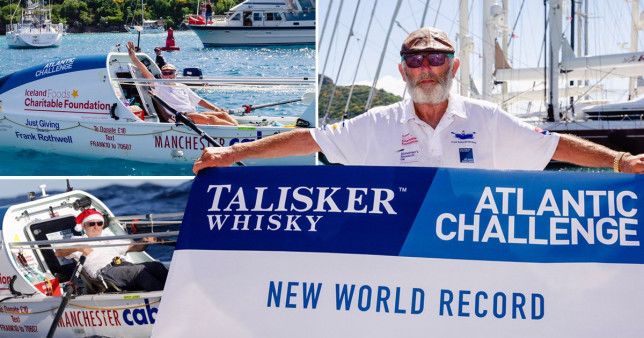 A grandfather has raised over half a million pounds for charity by rowing unassisted across the Atlantic.

Frank Rothwell, from Oldham, started on December 12 and crossed the finish line yesterday, reuniting with his wife of 50 years Judith in time for Valentine’s Day.

He set off from La Gomera, one of the Canary Islands, and completed the journey in Antigua in the Caribbean.

He raised the money as a tribute to his brother-in-law Roger, who died with Alzheimer’s aged 62. 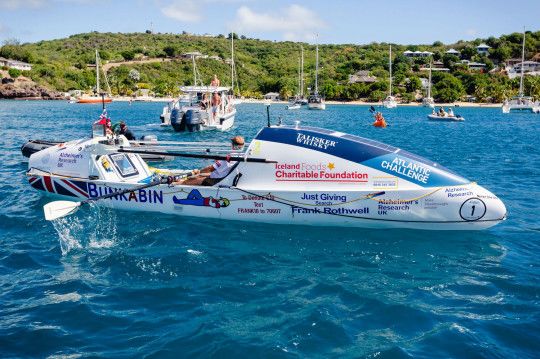 The boat he completed the challenge in

The charity said he was the oldest person to row the Atlantic Ocean unassisted.

Iceland Foods Charitable Foundation has pledged to double the first £500,000 of donations.

Mr Rothwell went on: ‘I felt quite emotional approaching the finish. It took six long weeks to row the Atlantic, but the challenge itself has taken over 18 months of training and preparation, so I’m very proud of what I’ve achieved and the unbelievable journey I’ve been on.

‘While rowing, I received heart-breaking messages from people who have had similar experiences to my own, with my brother-in-law, Roger, so I hope I’ve helped other families in some way too.

‘I’d like to thank everyone who has reached into their pockets and donated, having the support from so many means the world to me. Thank you.’

The adventurer has previously spent five weeks on a deserted island for a Bear Grylls TV programme, and rowed in a boat nicknamed Never Too Old.

Iceland Foods founder Sir Malcolm Walker added: ‘I’ve known Frank for many years, so I knew his determination to complete a challenge would get him this far. But seeing the heart-warming and generous support he’s receiving from the public is astounding.’

Hilary Evans, chief executive of Alzheimer’s Research UK, said: ‘We’re incredibly moved by Frank’s determination to raise £1 million for dementia research. By taking on such a monumental challenge at 70 years old, he has helped to spread awareness and inspired people of all ages to take on their own challenges.

‘To bring about life-changing treatments for dementia, fundraising efforts from ordinary people like Frank and his supporters provides a crucial lifeline to the progression of our research.’

The solo row across the Atlantic is known as the Talisker Whisky Atlantic Challenge for sponsorship reasons.