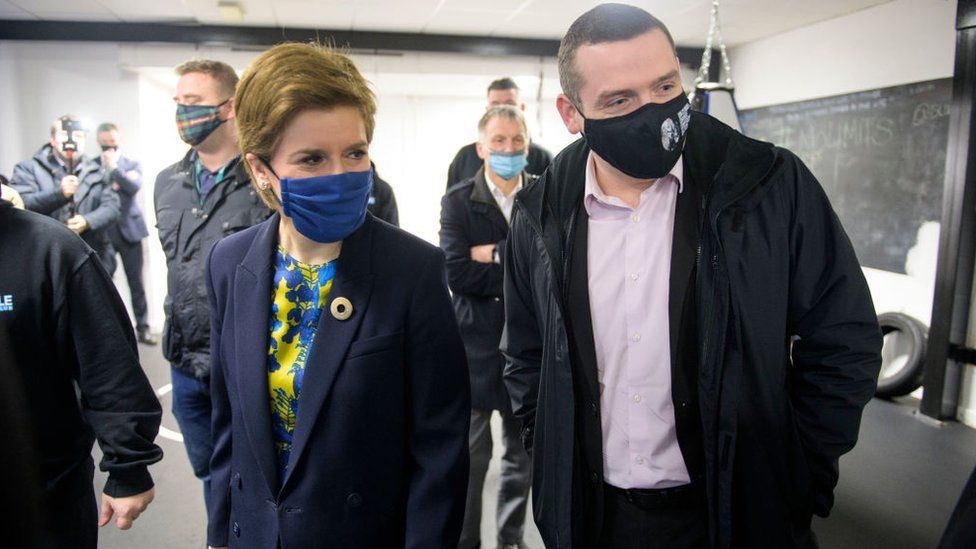 Nicola Sturgeon and Douglas Ross have held a joint visit to a drugs recovery group in a "united effort" to tackle Scotland's substance abuse death toll.

The SNP and Tory leaders agreed to "put politics aside" for their visit to the Bluevale Community Club in Glasgow.

Mr Ross said he would not "stand in the way" if ministers look to trial drug consumption rooms in Scotland.

And Ms Sturgeon said she is "absolutely open minded" about backing a Tory bid to put a "right to recovery" in law.

Drug-related deaths in Scotland hit a new record high of 1,339 in 2020, with the country suffering by far the highest fatality rate of any country in Europe.

The joint visit came about after the first minister challenged Mr Ross to join her in a working-class community, after he accused her of being "out of touch" - with the Tory leader responding with an invitation of his own to a drugs recovery group.

The Bluevale Community Club in Glasgow's Haghill area is a facility which helps people with addictions, as well as seeking to divert young people away from drugs.

The club's founder Kenny Trainer said he hoped it was not a "one-off photo op" by the politicians, but "a turning point" which could bring about change.

'A mouse trapped on a wheel' 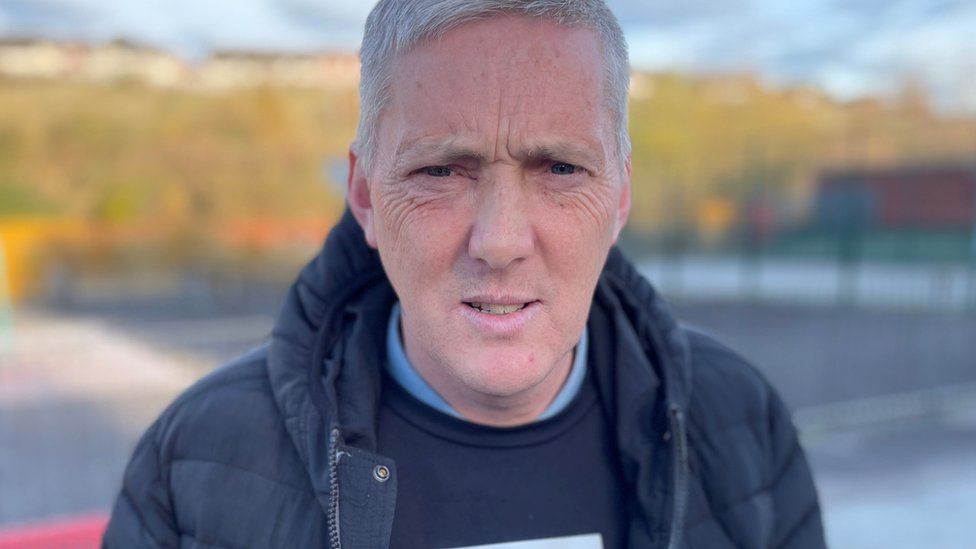 Scott Sharp, 50, has been addicted to heroin since his 30s and has been on methadone for 20 years.

Last month, for the first time in decades, he come off the opiate substitute in a bid to become completely drug-free.

He told his story to the First Minister Nicola Sturgeon and Tory leader Douglas Ross during their visit.

Scott said: "I was using on top of my methadone prescription - street valium or anything that could take me away from myself.

He told BBC Scotland he could have been abstinent sooner if his choice of treatment was better.

"I think maybe a short term prescription should be fine, and then maybe be told about recovery cafes or whatever suits that individual person."

Ms Sturgeon said her government had committed "significant additional investment" into tackling the "shameful" level of drug-related deaths in Scotland.

However she said she would "readily acknowledge there is much more that we need to do to turn around what is an unacceptable toll that drugs are taking on communities".

She said: "That is about faster access to treatment, it's about extending rehabilitation, both residential and non-residential, it's about supporting facilities focused on recovery and making sure we are seeing all these services in an integrated and joined-up way.

"Because behind all the discussion and terminology we are talking about human brings, real people and real families that are being torn apart by drugs." 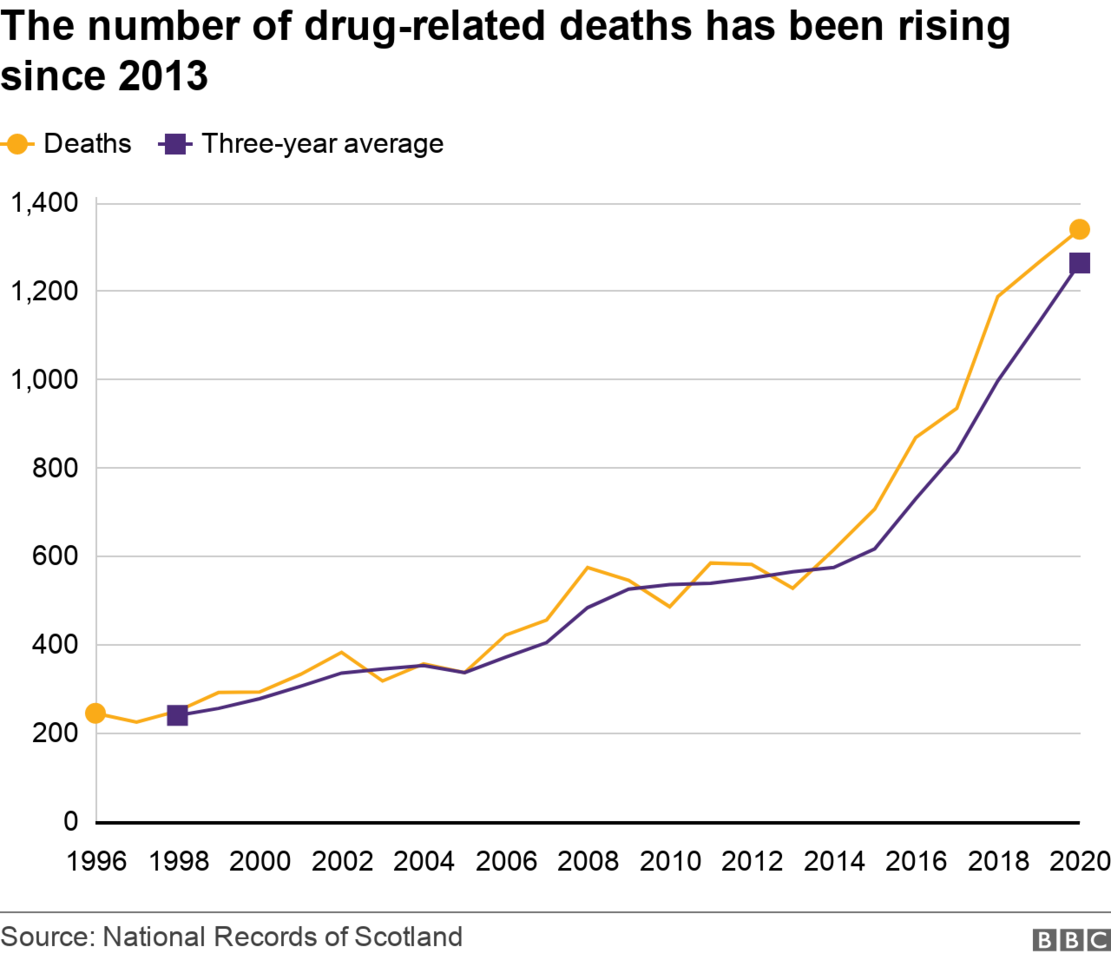 Ms Sturgeon said she was open minded to a Tory proposal to enshrine a "right to recovery" in law, although she said she would need to see the detail of any proposed legislation.

Meanwhile Mr Ross said he would back ministers in setting up safe consumption rooms, where people can take drugs in a clean and supervised environment.

Previous proposals to set up such facilities have failed to progress, with the UK government - which controls key drugs legislation - opposed to them.

In August, Prime Minister Boris Johnson said he is "instinctively" opposed to anything which could "encourage people to take more drugs".

However, Scotland's new Lord Advocate Dorothy Bain told MSPs that she could give "fresh consideration" to the legality of a "precise" and "specific" proposal. 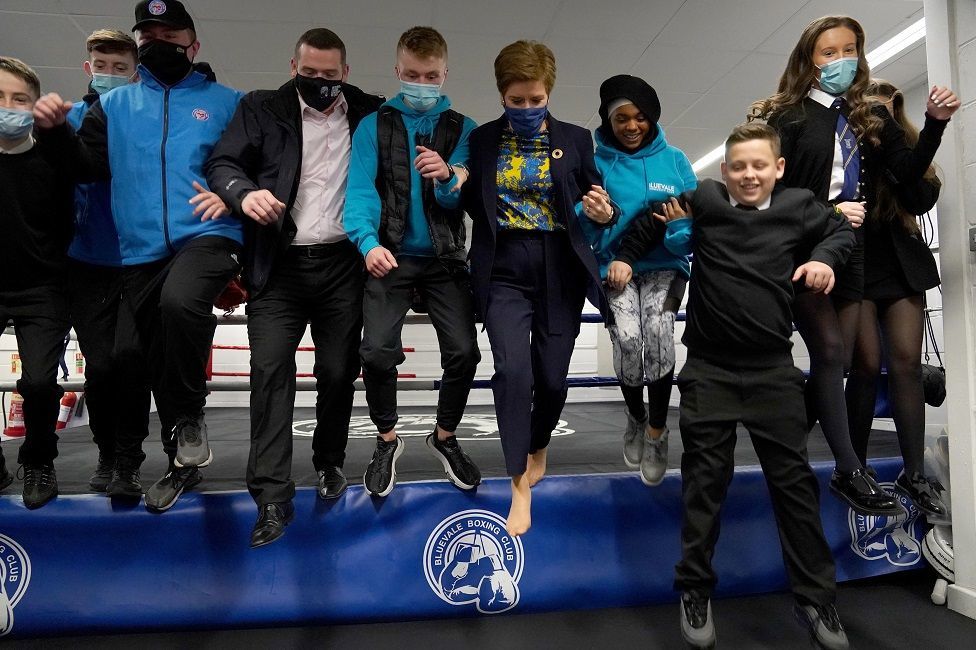 Mr Ross said: "I still have serious reservations about drug consumption rooms, the legality of them and how you police them. There are serious practical problems, but I also believe that when four people every day in Scotland are dying as a result of drug misuse we have to look at all the options.

"If the Scottish government bring forward plans to have a pilot scheme in Scotland, I won't stand in the way because I want to look at all the evidence surrounding this."

The Tory leader said no party had a monopoly on the right answers to the drug deaths crisis, saying it was important to "show there is a united effort to deal with this national scandal".

He added: "On issues like this I'm sure people will expect us to leave our party politics to the side and actually work to deal with the situation in front of us."

It is a rare sight indeed. The first minister is not often seen shoulder to shoulder with the leader of the largest Holyrood opposition party.

There has never been much personal warmth between them. It is, after all, only eight months since his party tried to force her from office in a confidence vote.

Yes, they'll appear together at memorial events, in charity photocalls or in the line up to greet the Queen. But teaming up on a major matter of public policy? Not so much.

That they have agreed to do so over Scotland's drugs deaths crisis underlines how serious the problem is.

That the number of deaths has risen sharply on the SNP's watch means they can ill afford to reject ideas and political support from wherever it comes.

For the Conservatives, this is an opportunity for them to be relevant, purposeful and potentially have some of their suggestions adopted by the government.

That may not happen often in this session of the Scottish Parliament, where the SNP and Green partnership does not require the votes of other parties to get things done.