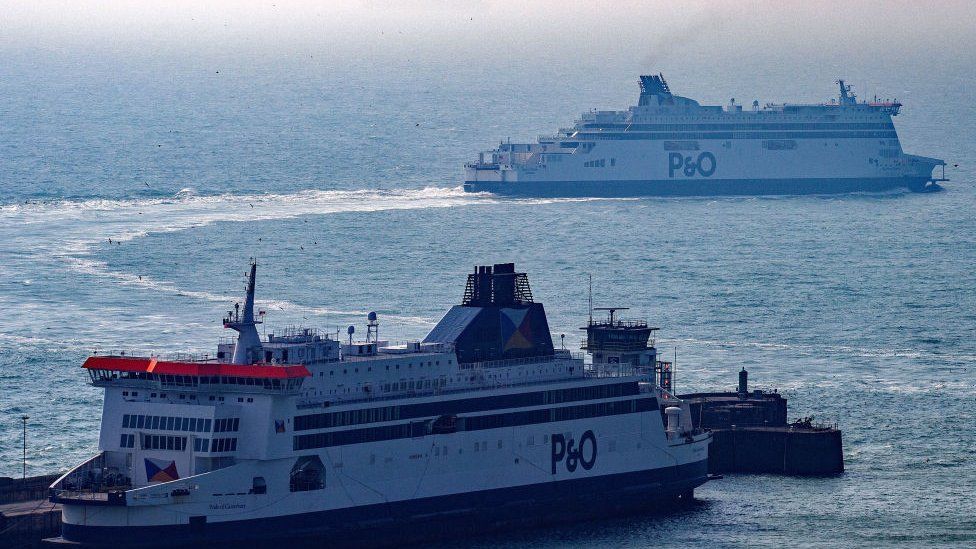 Ferry company P&O has been forced to reverse an attempt to pay its new, cheaper seafarers less money.

It comes after the RMT Union received reports of agency workers at Dover being asked to sign contracts replacing their old ones with reduced payment.

The union reported P&O to the Maritime and Coastguard Agency, which ensured the new workers retained their original wages.

The ferry company has been asked for comment but has so far not responded.

P&O sacked almost 800 employees last month and brought in cheaper agency workers on some of its boats, in a move it said would ensure the future of the business.

However, the National Union of Rail, Maritime and Transport Workers (RMT) said the firm was now "trying to bring in an exploitative model, with the lowest possible standards they can get away with".

RMT said that a seafarer on the Spirit of Britain ferry at Dover had initially contacted the union begging for help in a dispute over pay.

In an email seen by the BBC the worker wrote: "They don't care about our rights. They try to give us less money. We are desperate."

Transport Secretary Grant Shapps said it was "good P&O have reversed [the] further attempt at a pay cut", but added that "they must go much further and pay the minimum wage like all UK businesses".

"We will legislate to force them, but they could win back some much needed credibility by acting now," he said. 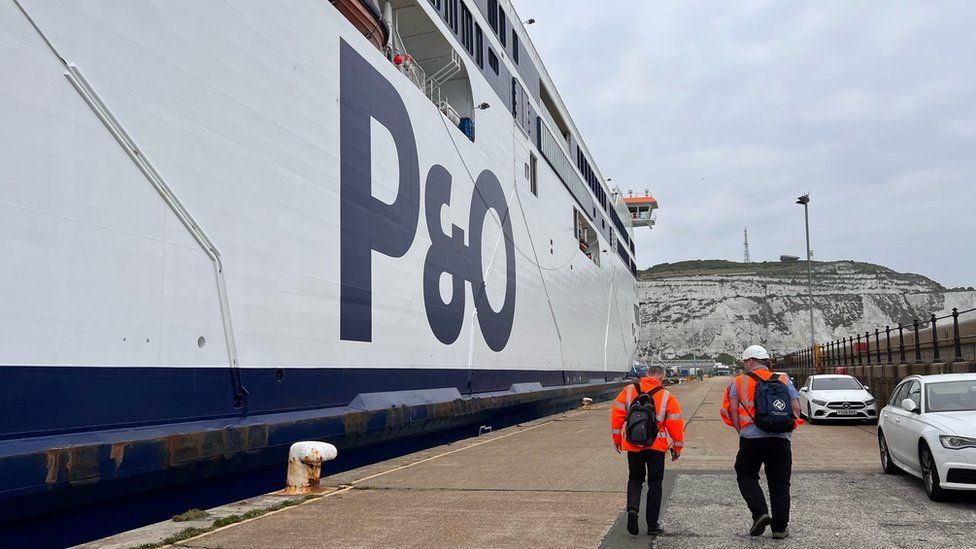 The Spirit of Britain resumed cross channel services this weekend

On Friday, the Spirit of Britain was cleared to resume sailing after inspections by the Maritime and Coastguard Agency. It had been held at the port since 12 April due to a number of unspecified deficiencies, according to the regulator.

It is P&O's first Dover to Calais ferry to recommence operations. It is unclear when commercial operations will resume, but the ferry has been on trials in the English Channel this weekend, making at least one trip to Calais, according to marine traffic websites.

The seafarer who contacted the RMT told the union that they were being forced to work without contracts, after old ones had expired. The worker claimed documents had also been lost by P&O.

The worker wrote in their email to the union: "This is my sixth day working without a contract, please help us!"

On Friday, the RMT went aboard the Spirit of Britain to speak with seafarers after being previously refused access.

National secretary Darren Proctor, who was on the visit, said P&O initially didn't want to let them on, instead offering the use of a meeting in a room in the port. The RMT declined, quoting the ISPS Code, which is a comprehensive set of measures designed to strengthen the security of ships and port facilities.

Once on board, the union's representatives were chaperoned to a new lounge on the ferry for pets, where the RMT inspectors were able to speak directly to newly employed workers.

The RMT said it spoke to a number of workers from around the world who have joined the ferry's crew who shared similar complaints.

Mr Proctor said P&O had "brought people in on a month contract, some on two-month contracts" and then told them that they have to accept lower pay rates if they want to stay on.

"Others are coming in on four-month contracts on lower pay. P&O is undermining safety and creating a lowest possible denominator in ferry standards," he said.

The union complained to the Marine and Coastguard Authority (MCA) who took action and affected seafarers' contracts were amended with their original wages reinstated.

An MCA spokesperson said: "Prior to re-inspecting the Spirit of Britain yesterday, the Maritime and Coastguard Agency received a complaint via the RMT Union that a seafarer had been asked to sign a contract with reduced wages.

"As part of the re-inspection the MCA investigated the complaint and as a result the affected seafarers were issued with amended contracts, which reverted to their original wages."

RMT said that P&O was "desperate to keep these new crew on board because they've been on board for four weeks now and these crews were beginning to have familiarity with the vessels. They need familiarity to get them sailing again."

It comes after a number of its boats were detained at ports amid concerns about the training of new seafarers among other things.

He said there was "absolutely no doubt" that under UK employment law the firm was required to consult unions before making the mass cuts.

However, he said no union would have accepted the plan and it was easier to compensate workers "in full" instead.

The P&O boss also said he would make the same decision again if he had to.

He said the government would consult on the changes needed to make it a legal requirement, but urged ports to take action "as soon as practical".

However, British ports have described the new pay plans for the ferry industry as "unworkable".

"The ports industry is genuinely sympathetic towards the situation of the impacted seafarers, however we would suggest that ports are not the competent authorities to enforce rules on employee salaries or working conditions in the shipping industry," said Richard Ballantyne of the British Ports Association.