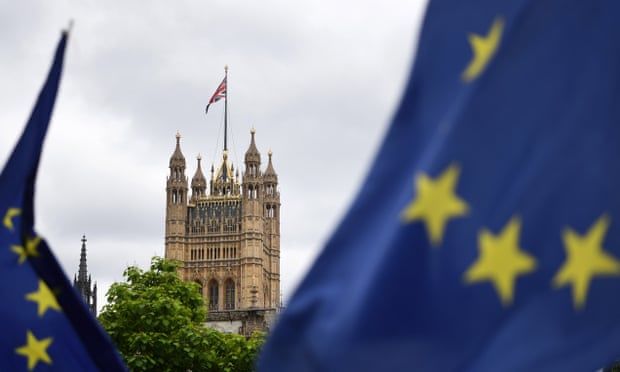 Over 50,000 EU citizens apply for settled status in a day to beat deadline

There was a fivefold increase in applications by EU citizens for UK settled status on Wednesday, with more than 50,000 people scrambling to beat the midnight deadline, it has emerged.

Such was the last-minute rush that the Home Office extended the time applications would be accepted to 9am on Thursday.

As EU citizens expressed their emotions on social media ranging from fear to anger that their rights to remain in the country were changed by the Brexit referendum five years ago, the Home Office sought to reassure applicants that anyone who applied before 9am on Thursday would be accepted as an in-time application.

Up to last week, Home Office data showed that 5.6m applications had been received by EU and European Economic Area citizens for the right to remain permanently in the country and to secure future rights to the NHS, to work, rent, bank, study and retire. The department said 5m had been granted settled or pre-settled status.

But sources said that in the last 24 hours alone the application numbers were “similar to the peak” day just before the end of the transition period on 31 December when 58,000 applied. This compares with the daily average of 10,000 to 12,000 in the past month, according to Home Office briefings last week.

However, posts on social media show many are still anxious about their futures.

One woman said: “Am feeling extremely dispirited this afternoon. I have had a good cry.” She had moved from Glasgow to Northern Ireland after finishing a higher national qualification in journalism and said she was “struggling to even get registered with recruitment agencies”.

She said: “A lady asked for my immigration status on Monday. I sent her both the Home Office letter and a screenshot of what appears on the system. (Previously I offered to send the [digital] share code but she refused saying she did not know what it was and it did not sound legit.) Today she came back saying this is not enough [to] prove I can work in the UK … This is fifth recruitment agency I have interacted with and nobody seems to have a clue what settled status is.”

Another social media user, Hannah, said: “I had a similar issue with a lettings agency, where I was trying to prove my right to rent with the share code, and they just didn’t have a clue what it was or how to do it. I had to send them screenshots from government websites, which they mostly ignored and it was only when it got escalated to the supervisor that it was sorted.”

Another EU citizen spoke of anxiety over an application that was sent by recorded post two weeks ago: “I helped out my partner’s mum with her postal application two weeks ago and sent it recorded delivery. We know it’s been delivered but haven’t heard a thing.”

The Home Office said everyone who applied in time would receive a certificate of application that could be used to evidence their rights. But it warned it would take time as the postal applications would have to be opened, verified and then the certificate issued.

It said it would be accepting all postal applications in the next few days and all applications that were proved to have been sent before the 30 June cutoff.

Nicolas Hatton, a co-founder of the3million campaign group, described Thursday as “a new dawn for EU citizens” but said he was confident those with settled status could live the rest of their lives in the UK if they wished.

“I really feel this. The Commonwealth people do it, yes there were big problems with the Windrush [generation], but it is possible to live as a foreigner in the UK.”

But he expressed concern that EU citizens would not feel the same. “It is good so many have applied before the deadline. And as the3million we’ve fought as hard as we could to make people feel secure and have their rights protected.

“But at a webinar last night the feelings being voiced were exactly the same as five years ago, a sense of betrayal and anxiety and an overwhelming feeling that the future is uncertain.”

Hatton said it was “pigheaded” of the government to say it was being “flexible and pragmatic” but not extend the deadline while the backlog of 400,000 was being processed.

“We all know that the backlog and later applicants are the more complicated cases, people who didn’t realise their children needed to apply separately, the elderly. Why didn’t they just have an amnesty until the backlog was cleared?”

A Home Office spokesperson said: “EU citizens who have submitted a valid application by 30 June will have their rights protected in law and will be issued with a certificate of application, which can be presented to employers and landlords and verified by our checking service.

“As we approached the deadline we saw a surge in applications. To ensure everyone who was waiting could make an in-time application we will be accepting all applications submitted online overnight on 30 June/1 July, and paper applications posted before the deadline.”

It added that anyone waiting to receive their certificate of application can share their confirmation of application with landlords and employers. “Our checking service will show their application is pending and therefore ensure their rights are protected.”