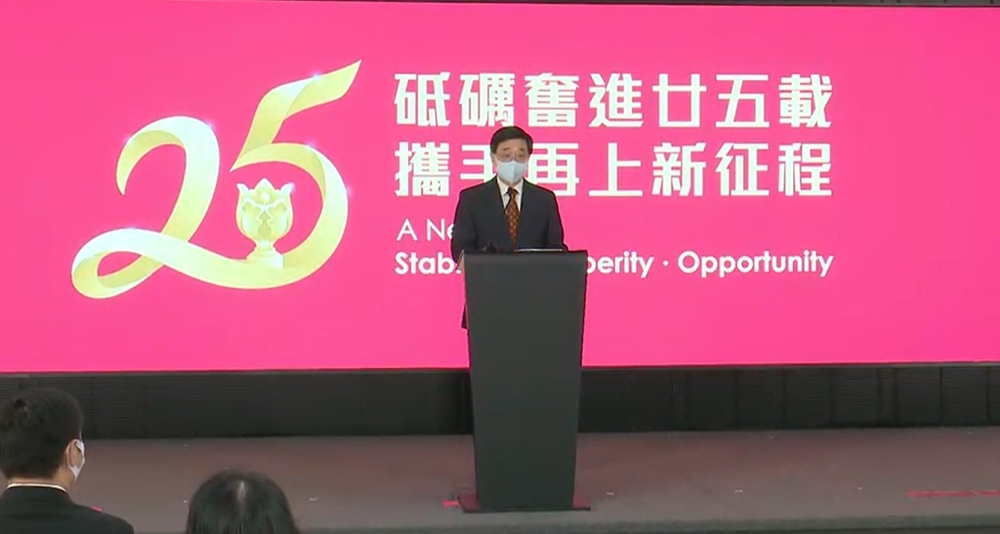 A New Year's Eve countdown at the West Kowloon Cultural hub for the first time on Friday will kick start more than 100 events ear-mark to celebrate the 25th anniversary of the SAR, Chief Secretary John Lee unveiled on Wednesday.

Lee, who chairs an inter-departmental committee for the celebration events, said a series of cultural and art celebration events will be rolled out to offer a variety of opportunities for citizens to celebrate and enjoy as the government opts to promote Hong Kong as a cultural exchange center.

Other celebrations for HKSAR 25th anniversary include a Lunar New Year Power Up Park and FarmFest next month which support local produce, a grand parade by disciplined services and youth groups in July.

Lee said 14 Hong Kong Economic and Trade Offices located overseas and SAR offices in the mainland will also participate in the celebrations.

An exhibition in celebration of the 25th anniversary of Hong Kong's Return to the Motherland will be held at the National Museum of China in Beijing whereas exhibitions of Hong Kong martial arts novelist Jin Yong will be held in other cities in the mainland.

A “Hong Kong Week” is to be held in Bangkok, Thailand while “Hong Kong Month” will be held in cities in Europe as the committee further promotes the city’s profound international advantages around the globe.

This year’s motto, “A New Era, Stability, Prosperity, Opportunity” celebrated HKSAR’s 25th anniversary, encapsulating the success in the past 25 years and prosperity to flourish in the new era under One Country, Two Systems alongside the Greater Bay area development.

Hong Kong has implemented One Country, Two Systems and has continued to pose its role as an international financial hub in the last two decades, he said, under the vast support from the mainland.

“The colossal celebration events were also aimed to showcase to the world our eagerness and readiness to embark on further development as we invite international professionals to join innovative technology meetings and financial forums,” Lee said.

“Hong Kong has changed from destruction to construction, as we returned to stability and now embrace to flourish under the implementation of National Security Law and improved electoral system.”

Chairman of the club Philip Chen Nan-lok said the club is delighted to show its support to the city’s growth and development with their strong commitment to Hong Kong and help all walks of life.

The funding will be used to support five key areas among celebration events including arts and culture, sports, support to underprivileged, sustainability and international conferences.

This year, both local and overseas organizations are encouraged to organize activities celebrating the 25th anniversary to provide more opportunities for public participation and to enrich the festive atmosphere. The events should be non-profit and held next year to celebrate the establishment of HKSAR. Organizations can apply for accreditations online from the official website and their event will be put onto the website’s calendar and will be granted to use the official logo for publicizing their events.

Details of other celebrations can be found on the HKSAR 25th anniversary official website: https://www.hksar25.gov.hk/tc/index.html