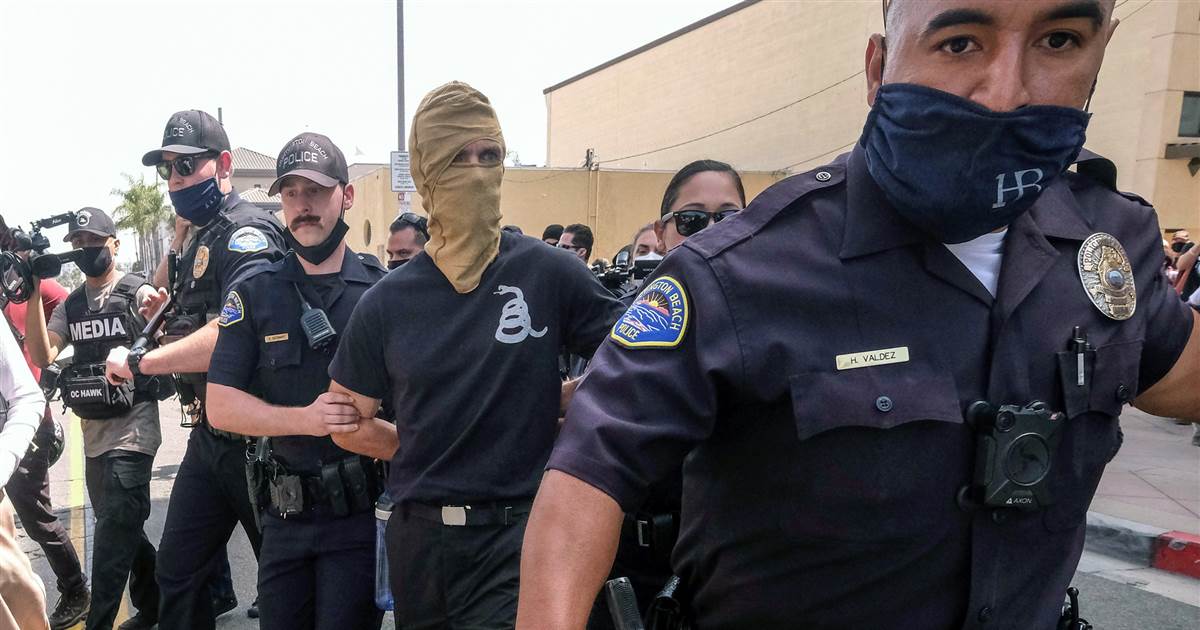 Opinion | "White Lives Matter" protests are failing. And here's one big reason why.

For tech activists like me who volunteer to track and get white supremacists removed from tech services, the failure of these rallies is the unsurprising result of lots of work.

"White Lives Matter" rallies this weekend were billed as a national event that would make "the whole world tremble." But after weeks of hype came the big denouement: (Almost) no one showed up. NBC News reported that a lone protester in Albuquerque, New Mexico, was outnumbered by hundreds of anti-fascist protesters. Similar things happened in Philadelphia, North Carolina and Texas. In New York City, it appears that there was nobody to protest.

It's possible that some of the "White Live Matters" enthusiasts were spooked by the over 400 arrests made after the Jan. 6 storming of the U.S. Capitol. But what really made the rallies toothless was the work that has been done by activists who have disrupted their organizing to the point that it was either too frustrating or too confusing to gather successfully. This may seem like it happened on its own — or that law enforcement was a deterrent. But for tech activists like me who volunteer to track and get white supremacists removed from tech services, the failure of these rallies is the unsurprising result of lots and lots of work.

When we see images of menacing extremists gathered wearing matching T-shirts and symbols on the news, I see a stack of tech platforms that made it possible. As megaphones for bigotry and xenophobia, platforms are the backbone of extremist operations.

Extremist groups communicate, build their communities and raise money for their operations in much the same way that any other businesses or organizations do. The Proud Boys designed and sold T-shirts, hats and sweatshirts through e-commerce platforms like Amazon, TeeSpring and Etsy — until activists got them banned. Super Fun Happy America, a right-wing group whose leader and several members have been charged with storming the Capitol, still runs an online store.

Meanwhile, a recent analysis by the Institute for Strategic Dialogue and the Global Disinformation Index found that 73 U.S.-based hate groups were using payment services like Stripe, Square, PayPal and Facebook's donation tools to run their white nationalist, anti-LGBTQ and militia organizations.

Tech companies that host these organizations often charge monthly or annual subscription fees for cloud-based services. Mailchimp, an email and marketing service, and Wix, a website builder, offer freemium products, which allow users to begin using accounts at no cost. These platforms operate at a scale that makes it hard to know who's using them — that is, until activists contact them, often with documentation showing violations of acceptable use policies and terms of service.

Thankfully, platforms are responding. When white nationalists gathered for the infamous rally in Charlottesville, Virginia, they organized easily. But after the rally, GoDaddy, Google and Amazon Web Services booted them off their services.

Some tech leaders have argued that banning extremist groups would actually make us less safe. Cloudflare CEO Matthew Prince originally said banning 8chan "would make our lives a lot easier, but it would make the job of law enforcement and controlling hate groups online harder." But such a claim became difficult to sustain after three mass shooters dropped their manifestos in 8Chan's forums. Cloudflare shortly thereafter reversed course and dropped the site.

Other critics say deplatforming would drive bad actors underground toward more nefarious watering holes. But evidence shows the opposite: Most simply give up. They are demoralized by the sudden loss of influence and income.

Last year, Stefan Molyneux, a white nationalist whose rhetoric seems to have helped inspire the mass shooter in Christchurch, New Zealand, was blocked from automatic recurring donations through PayPal and Mailchimp. He was banned by SoundCloud, Twitter and YouTube, effectively wiping him off the map. In a recent podcast, Molyneux revealed that the effects have been devastating: "5 percent of people followed me to a new platform," he complained. "My donations have cratered."

Milo Yiannopoulous, a white nationalist firebrand who was banned from Twitter after he organized an abuse campaign against the comedian Leslie Jones, is virtually unseen now. He's stuck in exile — a Telegram account — where he no longer enjoys access to a wider, mainstream audience. At his peak, he had 338,000 followers on Twitter. After starting over on Telegram, he now has just 19,000. He says he is $4 million in debt and admits that he has hit an engagement wall.

"I spent years growing and developing and investing in my fan base and they just took it away in a flash. This 19k bull---- here is not going to cut it," he said in a September 2019 Telegram post. "I can't make a career out of a handful of people like that."

That is exactly the point. Deplatforming works. It makes it harder to recruit, and it makes building a community a frustrating and clunky experience. Deplatforming disrupts and disables bigots and removes financial incentives to spread hate and fear.

If you support the failure of these so-called White Lives Matter rallies, then you must also support the work that goes into making this possible.