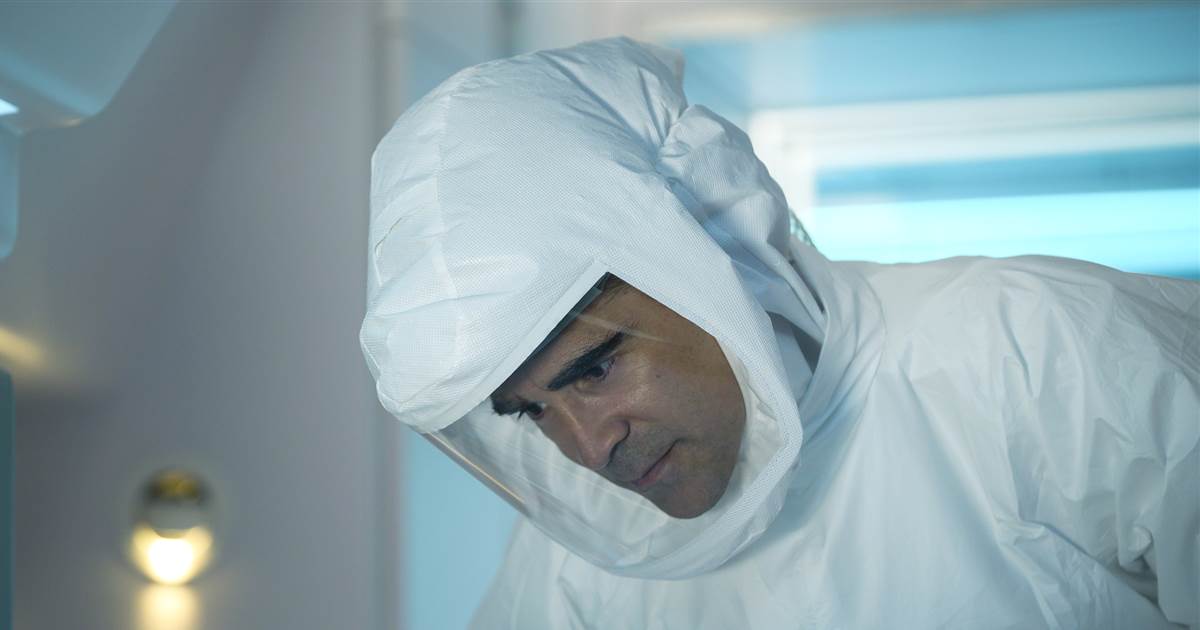 "Voyagers" promised a sexy thriller. But it isn't sexy and it doesn't thrill.

Director Neil Burger wants to say something about modern society. But he forgot to give us a compelling enough movie to figure out what that is.

If, at some point in the future, you find yourself making a movie about a spaceship on which a crew of genetically engineered teenagers must form a society in order for their grandchildren to complete the trip from Earth to another habitable world, my one request is that you not set the entire film during the worst two weeks of anyone's adolescence. Neil Burger has already filled that niche with “Voyagers,” starring Tye Sheridan and Lily-Rose Depp, who can’t really be blamed for how bad this is.

There is — and has been for many decades — already wonderful science fiction on the themes Burger tried to put in his movie. Gene Wolfe set a four-book series, “The Book of the Long Sun,” on a generation ship headed from a post-apocalyptic Earth to a habitable exoplanet. Ursula Le Guin’s short story “Newton’s Sleep” explores the problem of human evil spontaneously arising among scientifically minded utopians on a spaceship. N.K. Jemisin’s Green Lantern comics, “Far Sector,” parse the ethics of suppressing emotional responses in pursuit of social harmony. (There are also less successful sci-fi explorations of social dynamics in space isolation, like 2016's "Passengers.")

The theme — repression in the service of comity — and the setting — an isolated conveyance, headed away from our current civilization to establish a new, presumably more successful one — are good ideas. But they need elaboration, not paring down, to actually explore the problems of human lives and societies, which, you may have heard, are quite complex.

I don’t want to put too much on this little movie, which is pretty inoffensive — but I’ve never seen anything quite like it. It has all the hacky editorializing of a James Cameron movie with the overwrought emotionalism of a Chris Nolan blockbuster but is completely devoid of the action of either; there’s not an inventive edit or a cool-looking special effect to be seen anywhere.

Sheridan and Depp do what they’re supposed to do, which is to say they look perfect and slender and are largely silent, emoting with their furrowed brows and beautiful eyes under the gaze of their watchful, benign father figure, Richard, played by Colin Farrell.

The conceit is this: The kids discover that their daily blue drink Richard is giving them is actually an anaphrodisiac to keep them from being distracted by their adolescent urges. Naturally, two of them, Christopher (Sheridan) and his buddy Zac (Fionn Whitehead) stop taking it and go Full Puberty on their bewildered colleagues, who soon follow suit. The result is clearly supposed to be a parable about the way we live now, with the crew of the Good Ship Space Teen standing in for various factions in our society.

Christopher turns out nice enough, even with hormones, but Zac becomes a space demagogue who blames a suspiciously convenient disembodied alien for all his misdeeds and takes over the ship. Sela (Depp) soberly ponders ethical problems; Phoebe (Chanté Adams) is the strict rule-follower; Julie (Quintessa Swindell) is the hedonist; Kai (Archie Madekwe) is the incel.

It would be nice to care about these characters, but they have very little in the way of inner lives, and what peril they face gets dispelled pretty quickly, with the exception of one entertaining chase sequence through the ship’s ventilation system.

The film is billed everywhere as a sexy thriller, though it is neither thrilling nor particularly sexy. It has exactly one moment of genuine emotion, in which the Farrell character — whose role on the ship is to educate and feed this army of perfect kids — fantasizes about being allowed to hug them all, just once. It also has exactly one joke, the one when the two characters who stop drinking their blue drink discover an interest in sexuality while their peers look on, horrified.

What’s most striking about “Voyagers” is how far out of its way it goes to avoid entertaining us. At the climax of the film, one of its heroes is blown out of an airlock that is slowly draining all the oxygen from the ship. It’s a setup for what might be a last-minute rescue, but on the other hand might be a brave self-sacrifice. When another character spots the hero clinging to the side of the spaceship, they lock eyes … and then Burger cuts away.

Part of the difficulty in empathizing with the characters or being thrilled by the plot is that Burger displays a shocking disinterest in the nuts and bolts of world-building. At one point, he has the characters running around a spaceship — one that is presumably pressurized against the vacuum of space — wielding ballistic weapons that have been set aside to protect them during the voyage, even if they might also rupture the hull.

During the one good chase sequence, it's not even clear whether the characters are in the ventilation system, a water filtration system or weaving in and out of electrical conduits. It's just random stuff behind a wall; the sort of imaginative detailing that normally goes into making a spaceship seem like a spaceship to audiences just isn't there.

The broad reason that everything from the set design to the dialogue is so thin and perfunctory seems to be that Burger is trying to Say Something about our society. But, as our politics have gotten more urgent, some artists — apparently including Burger — have become less concerned with making stories than with staging little wars between symbols. It’s not that art shouldn’t have anything to say, but perhaps it ought to at least try to be art along the way, if there’s time. Good narrative art meanders; it takes its time showing us around the lives of the people who inhabit it and in doing so invites us to imagine lives other than our own, thereby effectively making its point by making its point live.

If the point of "Voyagers" is to convince us that Neil Burger’s personal politics are probably fine, then OK, we can give him that. With that off his shoulders, perhaps he’ll do us the courtesy of making a competent movie next time, too.