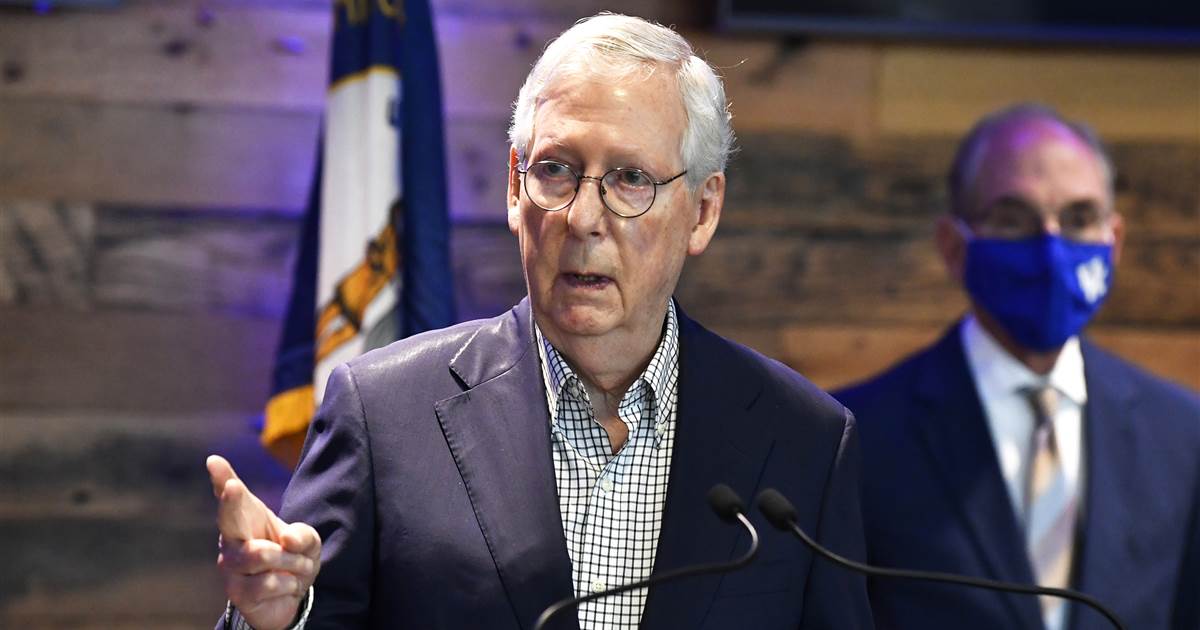 Opinion | The free market rejected Republicans' war on voting rights. They're not taking it well.

The party that once hailed the decision that corporations are people are now showing businesses' political leanings the same disdain as actual people's.

When the Supreme Court ruled that corporations, like any person, have a right to freedom of speech — specifically in the form of their political spending — Republicans celebrated.

“For too long, some in this country have been deprived of full participation in the political process,” then-Senate Majority Leader Mitch McConnell crowed after the 2010 decision in Citizens United v. Federal Election Commission. “Our democracy depends upon free speech, not just for some but for all.”

Some 11 years later, many of the same people who celebrated corporations’ emancipation have adopted a new mantra: Like children, corporations’ First Amendment rights are mostly for show. Specifically, corporations’ political donations to Republicans should continue apace, but the check-writers ought to keep their social and political views to themselves after they’ve invested in Republican policymakers.

“My warning to corporate America is to stay out of politics,” the very same McConnell, now the Senate minority leader, told reporters Tuesday, which he’d first phrased as “advice” in a speech on Monday in Kentucky. He then added, “I’m not talking about political contributions.”

The Senate minority leader’s ire was stirred by the growing corporate backlash against Georgia state lawmakers’ attempts to restrict access to the ballot box, which comes amid similar Republican pushes in legislatures around the country. Major League Baseball’s decision last week to remove this year’s All-Star Game from Georgia, though, was the spark that set everything off.

“Corporations will invite serious consequences if they become a vehicle for far-left mobs to hijack our country from outside the constitutional order,” McConnell said in a separate statement on Monday.

What consequences? Republicans from former President Donald Trump on down have called for Republicans to boycott offenders of party orthodoxy on voter suppression, including baseball and the Coca-Cola Co.

The result is disorienting: a party unmoored from its limited government, free expression heritage. The latter belief was most recently expressed in an increasingly hysterical campaign against so-called cancel culture, by which conservatives often meant calls by liberals to boycott organizations, individuals and/or companies promoting racist, homophobic or sexist ideas. Now the right wants to proscribe private enterprises — or use governmental power to tell them how and when they can express themselves when those expressions don’t comport with conservative orthodoxies.

What in the name of Ronald Wilson Reagan is going on here?

First, Republicans apparently can’t believe how ungrateful corporations are being. It’s no exaggeration to say that McConnell was, for years, the fiercest defender of companies’ ability to engage without any restriction in politics. That was fine when they were advocating for cuts in taxes and regulation and trying to exterminate unions, and therefore aligned disproportionately with Republicans. But these conservative stalwarts have strayed, and Republicans feels betrayed.

Splitting with titans of industry who have underwritten their political gains poses an existential threat to a party that has also long prided itself as the visible hand of the free market. So the right is instead threading the needle by blaming a spineless C-suite class they claim is afraid of being “canceled.” (That’s what’s clearly behind McConnell’s dig at “far-left mobs.”)

Of course, the free-market theory to which Republicans purportedly subscribe also dictates that consumers will punish poorly run corporations on the merits, so there should be no need for McConnell, Trump and their followers to do so. But the market has been rather uncooperative with Republicans' culture war targets in recent years.

For example, there was the time then-President Trump focused his ire on the National Football League over its efforts to accommodate players’ protests of police brutality. Then-Vice President Mike Pence even dramatically stormed out of his skybox when some players knelt during the national anthem of a 2017 NFL game.

But four years later, football still reigns atop the American cultural landscape. “Even though the NFL took a hit last season [during the pandemic], its position relative to most other [TV] programming only grew stronger,” The Hollywood Reporter noted in January.

This hardly seems the stuff of a silent majority expressing its outrage by voting with its pocketbooks. Here’s an alternative theory for the aggrieved right to consider: Maybe their problem isn’t that baseball, football, Coca-Cola and the rest are ignoring the dictates of the free market but following them. After all, as New York’s Jonathan Chait pointed out, “Counties that voted for Biden account for 70 percent of GDP.”

It isn’t just that companies are beholden to their liberal workers, as some have suggested, or that they fear consumers. But the customers and the employees that corporations need to survive in the changing economy don’t want to spend their money — or earn it — at companies they see as supporting unconscionable acts like voter suppression. (And, beyond that, many good employees aren’t keen to work in states that, in some cases, are restricting their civil rights or those of their friends.)

There is also a second trend at work. If Republicans seem ideologically unmoored to outsiders, it’s because they are. What does the GOP stand for at this point? It’s divesting itself of the ideology of the free market. Its putative leader, beloved by social conservatives, is a twice-divorced philanderer and serial liar. The self-styled constitutional conservatives’ party is populated by people willing to overthrow our constitutional order — violently if necessary.

Toxic Trumpism has left a zombie shell of a party shambling through our politics whose core principles are now grievance, resentment and a skepticism — uttered more and more openly — about whether “the people” are all qualified to govern themselves.

That fuels the third trend, around which both Trump-ublicans and non-Trump Republicans have united: The 361 bills introduced in 47 states to restrict voting. Those bills are certainly spurred by the former president’s Big Lie that the 2020 election was stolen, but they also represent long-standing GOP dogma — also a lie — that there is massive voter fraud by Democrats against which Republican electoral wins must be secured.

What is new in 2021 is the growing extent to which conservatives are openly reframing their concerns from just illegal voters (of which there are vanishingly few) but legal ones as well — at least those legal ones Republicans see as undesirable.

“It would be far better if the franchise were not exercised by ignorant, civics-illiterate people, hypnotized by the flimflam that a great nation needs to be fundamentally transformed rather than competently governed,” Andrew McCarthy wrote last weekend in the conservative National Review. His colleague Kevin Williamson argued Tuesday that “the republic would be better served by having fewer — but better — voters.”

Better voters? Who gets to decide which voters are “better” — and how would they make that determination?

There is a word for rule by an elite few, and it’s not “democracy” or even “republic.” Rather, that word is “oligarchy.”

The problem for the oligarchy wing of the GOP is that their view is still unfashionable. So Republicans prefer to fight for a means to that end on ostensibly populist, culture war grounds, styling themselves as defenders of American values from corporations supposedly under the thrall of antifa and the Black Lives Matter movement.

But Republicans’ unwillingness to adjust to consumer demands in either the commercial market or the electoral one is something to which the rest of us need to pay attention. Our system — economically and politically — depends on both parties having a fundamental commitment to capitalism and democracy, inclusive of the parties’ desire to tweak and reform those systems. When one group is untethered from either capitalism or democracy (or both), the whole enterprise is endangered.
#donald trump
Add Comment