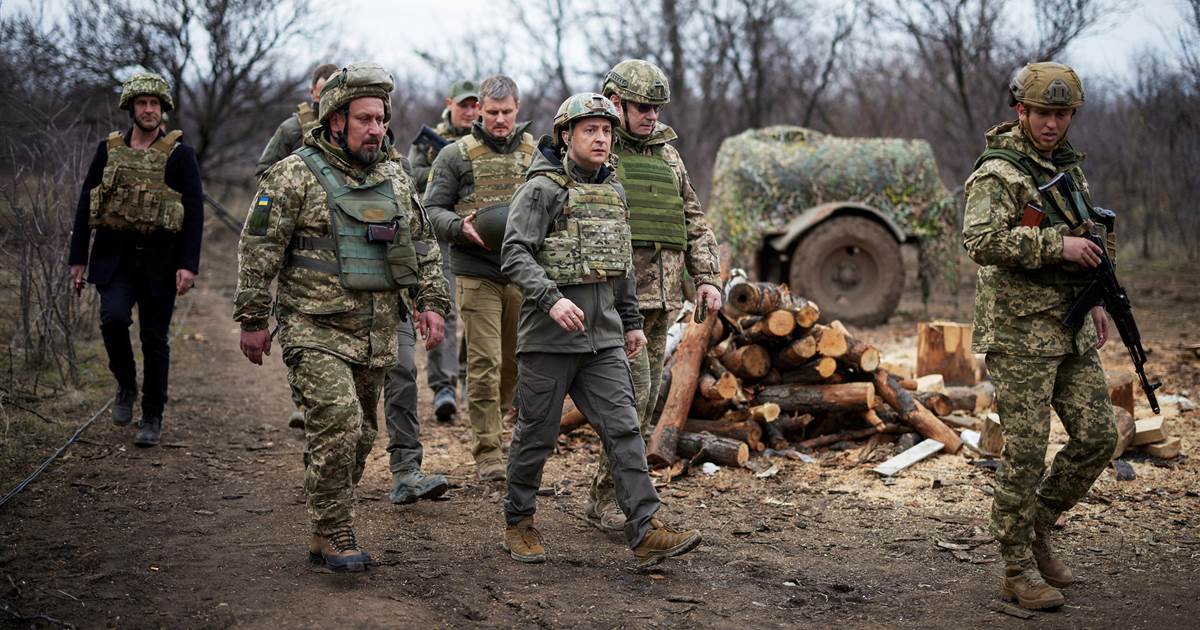 Putin is testing Biden. Here's how the president should respond.

The West needs to take bold actions — the most consequential of which would be inviting Ukraine to join NATO.

Russian President Vladimir Putin is sending a message. By massing 40,000 troops near the border of Ukraine — the largest such concentration since 2015, according to military monitors — he's testing the resolve of NATO and the new resident of the White House, President Joe Biden. The West must show its mettle.

It certainly did so on Thursday when the Biden administration issued a new set of ever-tighter sanctions on elements of the Russian state. The punitive measures came after Russian cyberattacks and election meddling and were a welcome change from years of President Donald Trump turning the other cheek. A number of sanctions were aimed at individuals associated with Russia’s seizure of Crimea seven years ago, but none seemed to target the latest Russian threat along the fringes of Ukraine — and that’s where Biden and his administration must act next.

The president, in a brief televised statement Thursday afternoon in Russia, was quite clear in his warning. He said the United States is “unwavering” in support of America’s “allies and partners in Europe” and that “now is the time to de-escalate.” He also offered the carrot of a Biden-Putin summit in Europe this summer to launch a “strategy of stability and dialogue.”

Defense Secretary Lloyd Austin was more direct in laying out a path forward at the end of a series of NATO consultations in Brussels this week. "We are committed to assisting Ukraine with its self-defense needs," he declared. "I call on Russia to respect Ukraine’s territorial integrity."

But Russia is unlikely to take that step just because of impassioned speeches from American leaders. Instead, the West needs to provide actions — the most consequential of which would be inviting Ukraine into the NATO fold.

Indeed, it's time we treated Ukraine like a real ally. As the critical clause in the NATO treaty, Article 5, says of member countries: An attack on one is an attack on all. That’s how the U.S. needs to regard Ukraine after years of rhetorical support backed only by largely defensive weapons.

NATO inclusion is a difficult decision that will not please everyone — particularly since it could lead to NATO and America’s direct confrontation with Putin if Russia carries its long series of skirmishes directly into Ukrainian territory.

But it’s the right move, as the Kremlin shouldn’t be able to dictate the nature of government or society of any other nation, particularly one within the envelope of European democracies. It’s incumbent on the United States in particular to uphold these values as Ukraine is fighting a potentially existential war.

Of course, granting Ukraine NATO membership — should Kyiv request it — wouldn’t go down very well in Moscow. Nearly three years ago, Putin laid down a warning: “Our colleagues, who are trying to aggravate the situation, seeking to include, among others, Ukraine and Georgia in the orbit of the alliance, should think about the possible consequences of such an irresponsible policy.” On Tuesday, Russian Defense Minister Sergei Shoigu went even farther, directly accusing NATO of "threatening" actions.

But Russia shouldn’t be allowed to simply walk in and take whatever territory it wants just because it was once part of the Soviet Union. That’s a terrible precedent far beyond Ukraine; another important reason for bolstering support of Kyiv is for Putin to see that Biden can’t be pushed around.

For now, though, Ukraine hasn’t asked to enter the alliance, largely because it is only likely to complicate its immediate issues with neighboring Russia. Also, its leaders probably are uncertain how closely they can rely on Western, particularly American, backing over the long term.

Until it seeks NATO admission, there are many alternatives to help the beleaguered government and its besieged people. In one constructive step, the Pentagon announced in early March a $125 million military aid package for Ukraine, the first under the Biden administration. This included patrol boats, advanced radar and combat evacuation equipment. Little of this, though, is the kind of heavy-duty offensive equipment that Ukraine has said it needs.

The persistent fear is that Putin will repeat his move of suddenly seizing territory in eastern Ukraine, as he did in taking Crimea from Ukraine in 2014. In that case, he took back the gift Nikita Khrushchev had made in 1954 when he transferred Crimea from Russia to the Ukrainian province of the Soviet Union in a gesture to the region that he once ran. It had been part of Russia since Catherine the Great seized it from the Ottomans in 1783.

Under the Soviets, other parts of Ukraine served as Russia's breadbasket while its mines and factories in the eastern stretches that Putin wants back helped fuel Soviet growth. But no longer. Moscow needs to recognize and accept today's reality.

Russian speakers comprise the majority of the population in eastern Ukraine and some would still prefer to be incorporated back into Russia, in part to protect their language and culture, which Kyiv has increasingly cracked down on in recent years. But the territory no more belongs to Russia than it does to Poland, or even Lithuania, which centuries ago once controlled vast stretches of this region, filled with fractious ethnic groups and competing allegiances.

The excuse for Putin in attacking Ukraine this time is not unlike the argument the Kremlin trotted out for its seizure of Crimea — thatthe port was "an inseparable part of Russia" and that Ukrainian nationalists were in some fashion threatening local Russian speakers. That concept is easily extended to any number of nations and nationalities that ring the core of the former Soviet Union, known as its "near abroad."

No doubt Putin is also nervous about the threat these fringe regions could pose to his hold on power. Belarus, to the north of Ukraine, for instance, has also exploded this year as furious throngs took to the streets over the fraudulent election that kept close Kremlin ally Alexander Lukashenko in power. Putin has never been more anxious to clasp Belarus closely.

Now, however, Ukraine is very much an independent nation, deeply anxious to chart its own path. Certainly, neither the United States nor NATO should demonstrate any interest in raising the temperature in this already superheated region. It is imperative, however, for the West and especially the United States to help Ukraine and its people face down Putin’s ambitions.