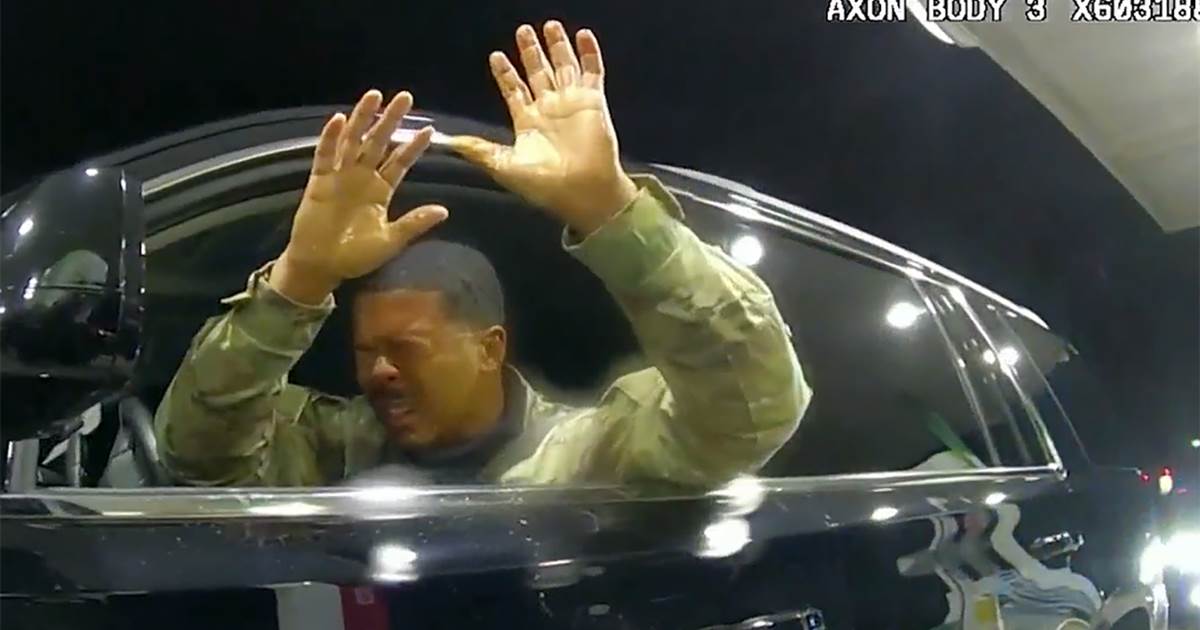 Obeying police has become a dangerous Catch-22. This video proves why.

The system as it exists makes it almost impossible for Black and brown Americans to avoid harm.

On the night of Dec. 5, a familiar scene unfolded at a gas station in Windsor, Virginia. Police pulled over Caron Nazario, a Black and Latino second lieutenant in the Army Medical Corps, claiming that his car didn't have license plates. (Reports said that temporary plates were taped to the inside of the new car's back window and that they were visible.)

Videos of the incident, some of them from Nazario's cellphone, as well as police body cameras, underscore the deadly truth we have long known about police interactions with people of color: Lawfulness is not always a recipe for safety. Obedience is not always a recipe for safety. The only person who can control the bodily health and well-being of the person pulled over are the people with the weapons. This is the bloody Catch-22 of modern policing in America.

In the video, police approach the vehicle with their weapons already drawn. The first instruction we can hear from the police is "Keep your hands outside the vehicle." Nazario, who still has not been told why he has been pulled over, keeps his hands thrust outside his driver's side window as instructed. Seconds later, he receives the next order from police: "Get out of the car, now." Nazario still has his seat belt on, so any attempts to get out of the vehicle would require violating the first order. He receives these contradictory commands all while two guns are pointed at him, and he still does not know exactly why he has been pulled over.

Between calm requests for clarity, Nazario then tries to assert his identity as an active-duty military officer. "I'm serving this country, and this is how I'm treated?" Would respectability and a shared language of patriotism serve to de-escalate the situation? No, as is made immediately clear by the officer's response: "I'm a veteran, too, and I learned how to obey." Nazario is, in the eyes of the police, a subordinate. He has been taught the chain of command and, as the officers see it, is obligated under threat of physical violence to recognize police as his superiors and obey contradictory orders with no visible justification.

As Nazario again asks why he is being so aggressively treated, an officer responds: "What's going on is you're fixing to ride the lightning, son," an allusion to either being Tasered or some other violence. ("Riding the lightning" can also refer to the electric chair, based in part on the electric chair on the cover of Metallica's album "Ride the Lightning"). This types of escalation during traffic stops is just one reason many cities may be following the lead of Berkeley, California, in disentangling traffic enforcement from police departments.

Nazario then tells the officer that he is afraid to try to get out of vehicle, and the officer responds, "Yeah, you should be." Whether he gets out of the car or stays in the car, it has been made clear that police intend to hurt him.

Less than a minute later, police spray him in the face multiple times with pepper spray. Even afterward, as he struggles to breathe, he still keeps his hands visible to the officers and asks them to remove his seat belt. He, like many other motorists before him, knows putting his arms where officers may not be able to see them can justify a police shooting.

This is the rhetorical trap of police commands. Getting out of the car means potentially getting shot, choked or subdued with unnecessary force. But as we have seen, hesitating and staying in the car, trying to reason with police and understand why you have been pulled over, is also a recipe for harm.

Any police-involved misunderstanding can escalate almost immediately. On the other hand, wordlessly obeying orders means being subjected to the violence of handcuffing, subduing and arrest.

The system as it exists makes it almost impossible to avoid harm.

And as the Nazario videos show, "resisting" officers often becomes the superseding offense, punishable by force, even if there was no underlying reason for the police interaction in the first place.

The incident summons the words of the civil rights leader Robert F. Williams, a critic of the philosophy of nonviolent protest, who wrote: "The majority of white people in the United States have literally no idea of the violence with which Negroes in the South are treated daily — nay, hourly. The violence is deliberate, conscious, condoned by authorities. It has gone on for centuries and is going on today, every day, unceasing and unremitting."

Within Williams' critique of the nonviolence movement was the recognition that there is, by design, a great deal of bodily harm implied within nonviolence; it is just one-sided.

We also now have substantial evidence suggesting that obeying police commands, like reaching for a driver's license or reaching to undo a seat belt, can justify the police shootings of Black men. In 2014, a South Carolina police officer was sentenced to five years in prison for shooting Levar Jones, a Black motorist who was obeying the officer's instructions to reach into his vehicle to retrieve his ID. In 2016, a police officer asked Philando Castile to produce his license and registration. After Castile informed the officer that he had a firearm in the car, the officer shot Castile as he was reaching for his documents.

The novelist Joseph Heller invented the term "Catch-22" in his 1961 novel of the same name. In his book, airmen can avoid danger only if they declare themselves unfit for duty. But fitness is characterized by "a concern for one's safety in the face of danger." So by informing their commanding officers of their unfitness, Heller's airmen were inadvertently demonstrating their fitness. Police in the U.S. create their own Catch-22. Police ask for extreme obedience. By obeying, motorists open themselves up to violence — but hesitation about exposing oneself to violence only triggers more violence.

The officer who confronted Caron Nazario has been fired, but his firing will not change the rhetoric, conventions and implied violence of traffic stops. Until the people expected to handle mass shootings are no longer the first responders who show up for routine encounters with the public, this will continue. After all, the violence Nazario experienced is a part of the violence that, as Robert F. Williams reminds us, is "unceasing and unremitting."