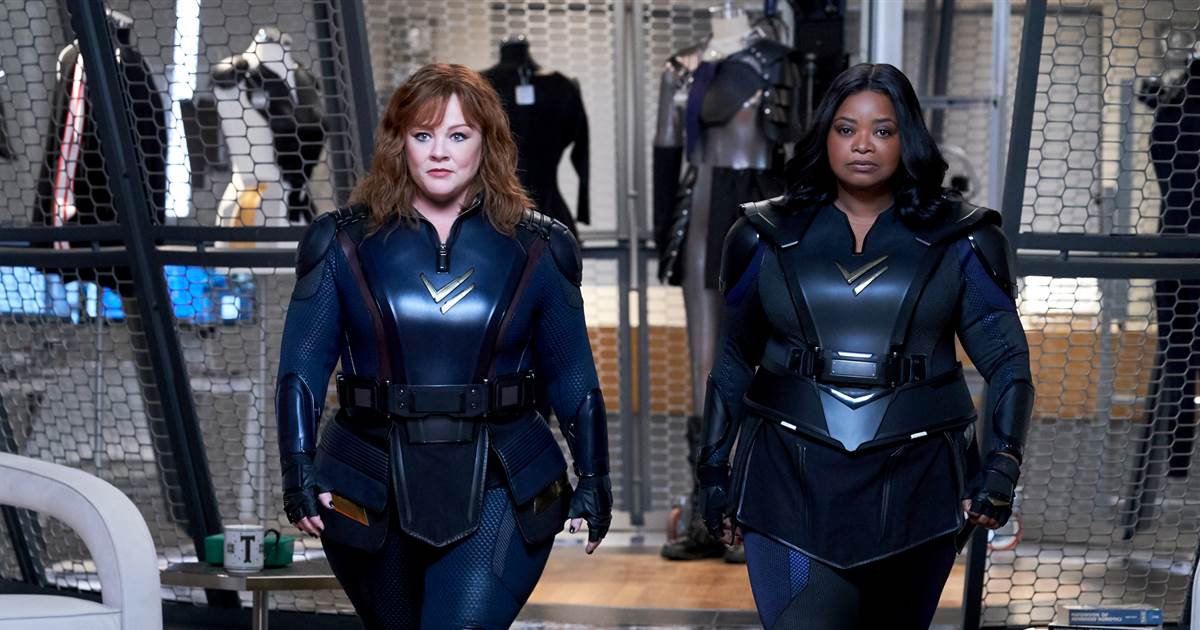 Lots of superhero films include banter and jokes. But “Thunder Force” often feels like it thinks its heroes are the jokes.

The new Netflix film “Thunder Force” initially looks like it’s planning to haul off and punch that restrictive super-beauty standard right in its graceful snoot. Its two stars, Melissa McCarthy and Octavia Spencer, are middle-age character actors rather than Hollywood action leads. That gives “Thunder Force” the opportunity to beat up bad guys and fatphobia simultaneously, and to challenge, or at least rethink, some of the tropes the genre takes for granted.

Unfortunately, the movie doesn’t do any of that. Rather than championing its two excellent leads and their own version of super-bodies, director Ben Falcone retreats to pallid jokes and tediously familiar plot clichés. The result is a film that cosigns rather than questions the link between beauty, power and goodness.

The movie takes place some years after a global pseudoscience event granted superpowers to many people on earth — all of whom are sociopaths. As a result, the planet has no superheroes, only supervillains. These supervillains are called “miscreants,” because no one could think of a better name, apparently.

Emily Stanton (Spencer) is the child of two scientists who are murdered by a miscreant. Em swears to avenge them by becoming a scientist herself and developing super powers so she can battle the miscreants and save the world. Lydia (McCarthy) is Em’s fun-loving but bumbling best friend who defends her from bullies in high school and tries to get the serious scientist to loosen up. Lydia stumbles into Em’s final test through an inexplicably unlocked door, and ends up stealing her super strength, leaving Em to get by on invisibility and a charged up taser.

The most courageous and adventurous way to treat this material would be to present it as a straightforward superhero story. It doesn’t have to be Zack Snyder humorless, but Em and Lydia could be legitimate heroes who are noble and smart and save people with a quip and courage, even though they are 50 and don’t look like Gal Gadot.

Instead, though, Falcone treats the material mostly as farce. Lots of superhero films include banter and jokes. But “Thunder Force” often feels like it thinks its heroes are jokes. They have a sleek Lamborghini, but they’re too heavy to get in or out of it gracefully. They don’t have any way to clean their costumes, so they smell bad — a not very subtle allusion to stereotypes about fat people being sweaty and unconcerned with personal hygiene. One of the side-effects of Lydia’s powers is that she craves raw chicken, so there are lots of close-ups of her downing disgusting foodstuffs.

Even Lydia’s romantic interest is a joke about food; he’s a miscreant named le Crab (Jason Bateman). His arms are crab arms, which she butters and seasons with Old Bay as part of their tryst. And then of course there are a number of jokes about how le Crab can’t pick up wine glasses or perform other tasks because he’s got crab arms and is essentially disabled. Again, “Thunder Force” gestures at showing that people with different kinds of bodies can be heroes, but then pivots to the same old stereotypes about how people with different bodies are gross or ridiculous.

It doesn’t help that the plotting is sluggish and staid, or that the dialogue is rarely as funny as it thinks it is, or that the film’s low budget is painfully visible. It would be great to see some middle-age women actually kick ass. But the fight choreography is unconvincing and half-hearted. Even the duo’s costumes look uncomfortable and stiff.

“Thunder Force’s” most egregious failure, though, is its treatment of Em. The movie is clearly supposed to be Em’s story. She’s the one who lost her parents, and she’s the one who has devoted her life to fighting the miscreants. She’s Batman.

But somehow Falcone manages to make Batman look whiny and priggish rather than cool and driven. We don’t get to see Em doing cool science stuff or wowing peers. Instead flashbacks show her in high school answering questions about subject-verb agreement and whining about how she has to study for AP exams. Her grief is elided and trivialized, as Lydia constantly tells her she’s not fun enough.

More, Falcone pushes Em out of her own story. Lydia not only steals her powers; she steals much of the screen time. Em, a traumatized Black woman who has nonetheless succeeded through grit and brilliance, is reduced to a supporting character in her own revenge and empowerment arc. The fact that Em’s superpower is invisibility feels, in this context, like an intentional insult. Given the script she’s been given, it’s no wonder the normally marvelous Octavia Spencer spends the little time she has on camera looking like she’d rather be anywhere else.

“Thunder Force” is about a world in which the greatest heroes are two middle-age women who look like middle-age women rather than movie stars. But it’s clear the film doesn’t really believe that such a world can exist as anything but a gag. Given the kind of bodies that are generally highlighted in superhero films, that failure of imagination isn’t surprising. But it is a disappointment.