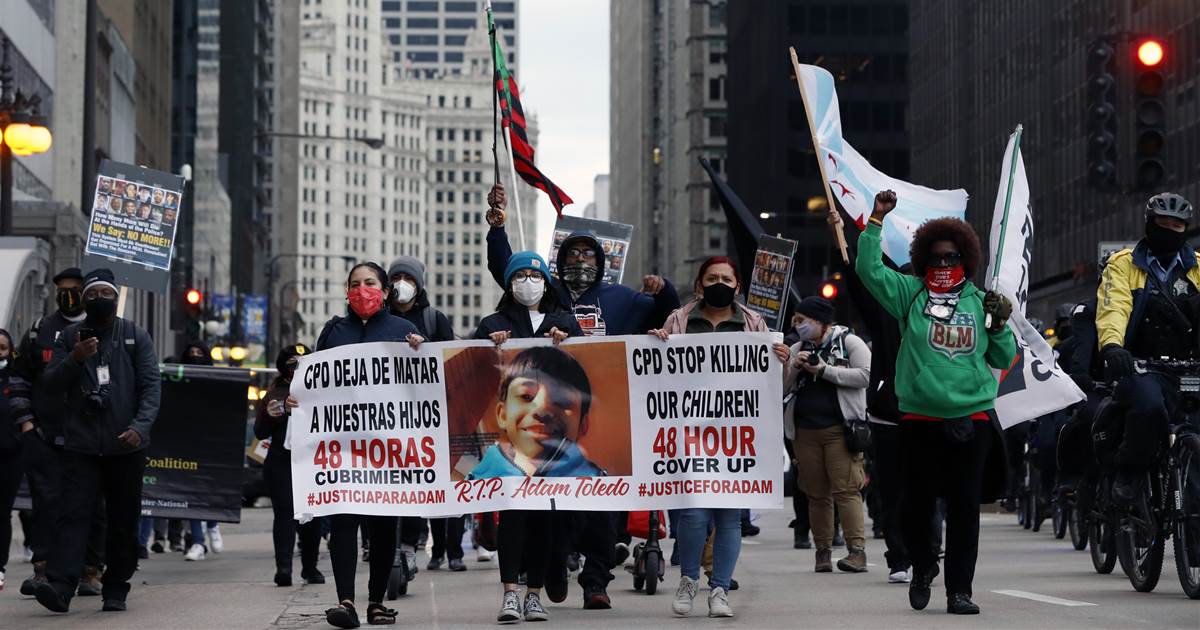 Chicago's police are out of control. Now they've killed a child with his hands up.

The department has a history of violence against the people it should protect. Now the world can see what Chicagoans have long known about our city.

Adam Toledo should still be alive. But he is not, because on March 29, Officer Eric Stillman looked at a child with his hands in the air and pulled the trigger on his weapon.

This comes after 17-year-old Laquan McDonald was shot by Chicago Police Officer Jason Van Dyke 16 times in 2014 (Van Dyke was convicted of murder in 2018 but the three officers who wrote false reports about the murder were found not guilty at trial). And it comes after 22-year-old Rekia Boyd was shot in the back of the head in 2012 because then-off-duty Chicago Police Officer Dante Servin fired over his shoulder into a crowd of young people after, he said, that he thought he saw a gun; it was a cellphone held by someone else. (Servin was acquitted of involuntary manslaughter in 2016 by a judge’s directed verdict and thereafter quit the force.)

And it comes after a 2016 Chicago Tribune investigation that showed the Chicago Police shot and killed 92 people and wounded 170 from 2010 to 2015, firing on the citizens it is supposed to protect an average of once every 5 days. And it comes after, as the co-founder of Mapping Police Violence, data scientist Samuel Sinyangwe tweeted, based on his organization’s work analyzing the patterns of police shootings, since 2013 the “Chicago police department has killed more people under the age of 18 than any other local law enforcement agency in America.”

But in 2021, after consent decrees and the uncovering of a police torture center and any number of scandals involving the Chicago police framing innocent people, as well as committing crimes and costing taxpayers billions in misconduct lawsuits and other expenses, the real question is: What good are the police doing for the city and for her residents? They are certainly not solving murders and they not preventing violence; in fact they are often an ongoing source of harm to communities.

The mayor is once again calling for peace, as mayors always do — for calm, for a nonviolent response by her constituents to a seemingly nonstop stream of violence by the police under her nominal control.

And you, reading this, you are so used to hearing about Chicago framed as “Chi-raq” and about the rampant gun violence and about the racist, rationalizing myth of “Black-on-Black crime” which is supposed to make police violence against Black and brown people seem like it’s for own own good. That makes it easy to let stories like Laquan’s, and like Rekia’s — let alone Flint Farmer’s and Ontario Billups’ and Cedrick Chatman’s and Erick Fields’, among many others — get drowned out.

Adam died. He didn’t die from the gang violence that we are told is supposedly omnipresent in Chicago in order to justify the overpolicing of our communities and the underpolicing of the police. He didn’t die from the kind of gun violence we too often see in our schools around America, the kind after which we are expected to send thoughts and prayers but demand no change to our laws. He died at the hands of an officer of the institution that is supposed to protect him and kids like him from harm.

And when the next incident of gang or other non-police violence happens, and the police ask the community to work with them — to trust them — it is not the “No Snitching” culture they so often decry that will be the obstacle to communication and cooperation. It is the horrifying history of police violence against the community that renders trust in the police improbable, if not impossible.

Too often Chicago police are enabled to avoid accountability by the mythos that the people they harm deserve to be brutalized or even to die at the hands of officers. It comes up as a justification not only after the rare armed conflicts between Chicago police and actual criminals, but in incidents ranging from bar fights with cops to disputes between cops and their neighbors to raids by cops on the wrong homes. It even let an officer stay on the force for nine years after child abuse allegations are made and a child has to be removed from their care by the Department of Children and Family Services.

And even when individual officers are held accountable for misconduct, there is no change to the culture of policing in the city. Officers proudly tout their right to go home at night with no consideration for the reality that their safety is not the only thing that matters. They fall back on lines like “It was a split-second decision,” even when the evidence shows that the person they shot only had a split second to comply.

But if someone like 13-year-old Adam Toledo could be expected to stop moving, drop anything in his hands (not that Adam had anything in his hands) and put those hands up in a split second, we should be able to expect that an officer of the law who gave the order will wait for more than just a split second for someone like him to respond appropriately before pulling the trigger on a deadly weapon. Or else they are just operating on shoot-on-sight orders for everyone they see.

Chicago has a lot of problems, and it might be comforting to some to think that more police officers and more funds for the police will solve those problems. But if the violence is continually coming from inside the department, should we really continue pretend that they are all isolated incidents and not a parade of red flags? Chicago will not solve any of her problems by giving yet more money to the police.

No one wants to admit that Adam and other children are learning — daily — that the police are to be feared when they are in trouble, not trusted. After all, the officer who shot and killed Adam reportedly ran right past the adult that actually committed the crime to which he was responding to kill a child who was running away from an adult with a gun. That officer should have seen a child, running away from the scene of a shooting, as someone most likely in need of assistance who could have used some protection from the very agency that the officer represented. Instead, he saw him as the likely perpetrator and, in a split second and without thinking, ended his life.

Adam Toledo is not the first child to die at the hands of Chicago police, but we can only hope — yet again — that he will finally be the last.
Add Comment