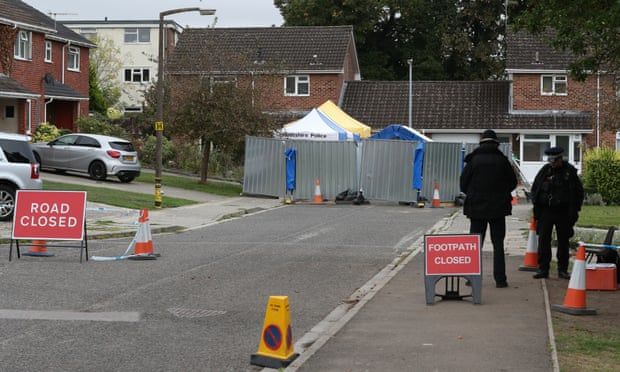 Only a tenth of Russian spy operations in Europe have been uncovered, according to the former MI6 boss Sir John Sawers, after it emerged that the two men accused of carrying out the Salisbury poisonings had been linked to a bombing in the Czech republic.

The ex-spy chief praised the Czech authorities for identifying the prime suspects behind a 2014 explosion at a munitions dump containing arms bound for Ukraine, and added: “I think they have them bang to rights.”

But he said he feared many other plots had gone undetected. “We see the extent of Russian aggressive intelligence activities across Europe. We probably only know 10% of what they’re doing,” he said. “There will be a great deal that intelligence services do that we’re simply not aware of.”

Sawers’ comments reflect a view in the intelligence community that the range and scale of Russian destabilisation activity has not always been publicly understood, although there has recently been a growing willingness to point the finger at the Kremlin where it is believed there is evidence to do so.

Next month, the UK government is expected to publish a new espionage bill in the Queen’s speech – previously announced in December 2019 – but which had been delayed, partly because of the impact of the coronavirus pandemic.

It is expected to make it a criminal offence not to declare work in the UK on behalf of a foreign government, to better capture spies working outside embassies; and to allow prosecutions under the Official Secrets Act of people based abroad to capture hackers working for Russia or other hostile states.

Western intelligence agencies have long believed that both Russian GRU military intelligence units and the FSB domestic intelligence once headed by president Vladimir Putin are behind a string of assassinations, poisonings, bombings and coup plots all around Europe in the last decade.

The Kremlin repeatedly denies it engages in such activity. Russia rejected the claims that it was behind the weapons dump blast and accused Prague of “striving to please the United States”.

On Saturday, the Czech authorities said they wanted to question the two Skripal poisoning suspects – understood to be GRU agents – who were in the country at the time of a munitions warehouse explosion in that killed two people.

They used Russian passports with the names Alexander Petrov and Ruslan Boshirov, the same cover identities used by the two men who were in Salisbury on the same day of the 2018 novichok poisonings.

Members of the GRU cell – 29155 – are also accused of being behind the poisoning of the Bulgarian arms dealer Emilian Gebrev. Weapons he was aiming to ship to Ukraine, embroiled in a military conflict with Russia, were held in the Czech munitions site.

Intelligence insiders acknowledge that only a fraction of Russian activity enters the public domain in the UK, led by the most high-profile cases. “I’m not sure that we pick up all the poisonings, for example,” said a former Whitehall insider, because substances were often used that are hard to detect.

“There are other reasons, too; a lot of this goes on at a lower level, looking perhaps more like organised crime. Other plots are disrupted. Some of this goes on in countries where there is little UK media interest,” the former insider added.

Britain has been accused of taking “its eye off the ball” when it comes to the spy threat posed by Russia, in a critical report finally published by the Intelligence and Security Committee Agency in 2020 after it had been held up for months by Downing Street, which refused to release it before the election the previous year.

The election of Joe Biden as US president appears to have prompted a more robust UK approach. Last week, the UK joined the US in formally blaming Russia’s SVR foreign intelligence agency for being behind the hack of Solar Winds software, widely used in the US government but also by a handful of UK public sector organisations.
#joe biden  #coronavirus
Add Comment