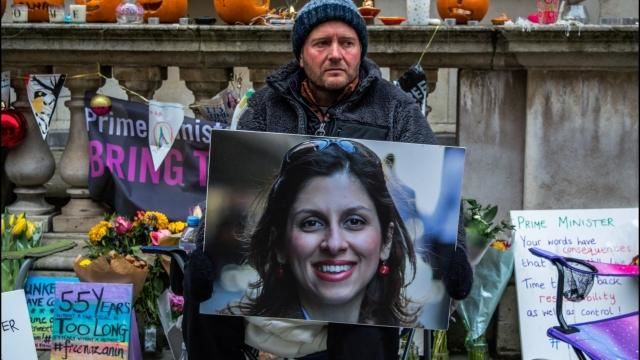 On hunger strike for my wife Nazanin

Richard Ratcliffe, the husband of Iranian detainee Nazanin Zaghari-Ratcliffe, is weeks into his protest.

Richard Ratcliffe, the husband of Iranian detainee Nazanin Zaghari-Ratcliffe, has been on hunger strike in Whitehall since 24 October, demanding the government does more to secure her release.

Mrs Zaghari-Ratcliffe, a British-Iranian dual national, was first jailed in Tehran in 2016 on spying charges, which she has always denied.

BBC video journalist Lorna Acquah has been visiting Mr Ratcliffe to talk about the physical and emotional toll of the hunger strike and its impact on his seven-year-old daughter.

It comes as Iran's deputy foreign minister Bagheri Kani is due to hold talks with officials from the Foreign Office in London.