Arsenal manager Mikel Arteta says everyone is shocked at the Gunners surging five points clear at the top of the Premier League but that he is determined his players should enjoy their present lofty status.

Martin Odegaard's second-half double in their win over Wolves was enough for Arsenal to take maximum advantage of Manchester City's shock defeat by Brentford and ensure they will be top on Christmas Day for the first time since 2007.

It is a major achievement for a club that has not finished higher than fifth since 2016.

Odegaard turned home Fabio Vieira's low cross from close range 10 minutes after the restart and then drilled in the rebound after Jose Sa had kept out Gabriel Martinelli's low effort 15 minutes from time.

It meant there was no slip-up for the Gunners, who watched City's defeat on the team coach as they travelled to the Midlands and celebrated when Ivan Toney scored in injury time.

"As you can imagine," said Arteta, when asked about the reaction.

"But that's the way that you live this league and that's the beauty. You start to do that on the second game of the season because the competition is so big that you're always looking at other opponents. It's something that every team does."

There was more good news from the Arsenal camp as Arteta revealed Granit Xhaka's first-half exit was down to a sickness bug that affected the visitors before kick-off, rather than anything that would put the Switzerland player's World Cup in jeopardy.

The former Spain, Real Madrid and Sevilla boss was introduced 15 minutes before kick-off at Molineux and watched the game from the stands.

He saw a microcosm of Wolves' season given the hosts battled hard and produced some opportunities despite spending much of the game on the back foot, but were undone by a lack of goal threat as they failed to score for the eighth time in 15 top-flight games.

Odegaard could be Arsenal's title key 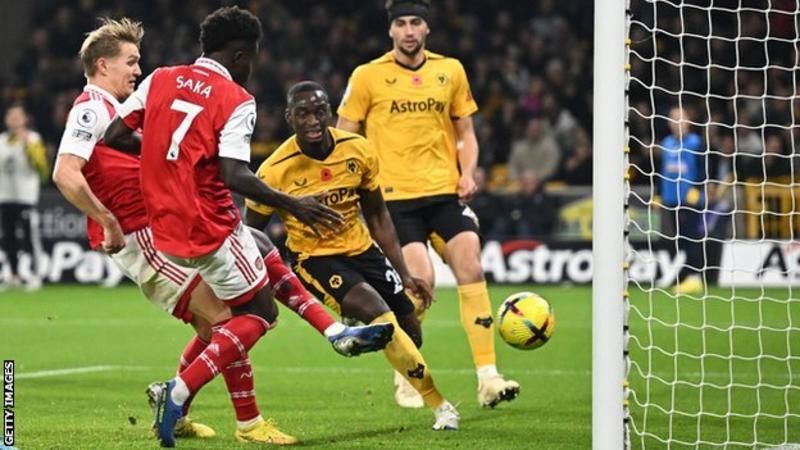 Odegaard has impressed since being appointed Arsenal captain

They do still have to play defending champions City as their first planned league game against them was called off last month to allow the Gunners to get up to date with their Europa League programme.

They also have to face an in-form Newcastle, but they have met all the rest of their 'big six' rivals and look very much the real deal.

Odegaard in particular has proved an inspired choice as captain by Mikel Arteta.

The 23-year-old Norwegian goes about his work in a quietly effective way, clean in his passing and astute in terms of his positioning, which given his central role is essential.

He is a goal threat too. His first was a poacher's effort as he evaded the attentions of Wolves defenders despite his proximity to the home goal. His second involved superb first-touch control as the ball ran out to him, then a precise finish.

Much has been made of Erling Haaland's likely impact for City after the World Cup, given Norway's absence means he will be resting when so many influential players are in Qatar. The same is also true of Odegaard.

As no Premier League season has reached Christmas Day with so few fixtures played, comparisons to previous years must come with an asterisk.

And before Arsenal's supporters get too excited, it is 1947 since they were top and went on to become champions, which now has to be the aim.

At the other end, only three clubs in the Premier League era have escaped the drop after being at the foot of the table.

If there is a shining light at the end of that particular tunnel for Wolves, the last team to do it were Leicester, who went on to become champions the following season.

Chairman Jeff Shi has less lofty aims judging by his programme notes, where he admitted he doesn't 'expect to start winning straight away', which is a novel approach.

There has been no word from Wolves about Lopetegui's contract but it would be a major surprise if it did not contain an escape clause on both sides at the end of the season should the managerial change fail to work as hoped.

No manager can make a silk purse out of a sow's ear though. And while Adama Traore's pace caused Arsenal problems and Goncalo Guedes produced one of his more effective displays, Wolves did not find the net.

They have scored only eight times in the league this season, by far the worst return in the top flight.

Diego Costa will be back after suspension once domestic combat resumes following Qatar 2022, although whether that will be enough to save Wolves is debatable.

Former magistracy to be converted into universal judicial education center