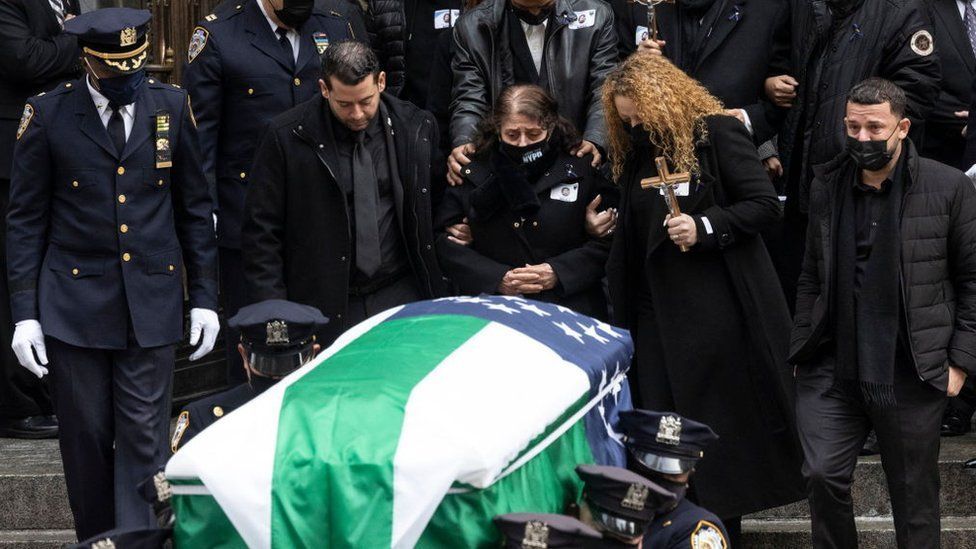 Number of US police officers murdered up by 59% - FBI

Murders of police officers rose by nearly 60% during 2021, amid a wider rise in violent crime across the US, according to FBI Director Christopher Wray.

In an interview with 60 Minutes, Mr Wray said 73 officers were killed in the line of duty last year.

Murders of all kinds across the US have risen dramatically since 2019.

Mr Wray said violence against police was a "phenomena" that "doesn't get enough attention".

He said it amounted to an officer killed every five days. Around 1,000 people are killed in the US by police each year, although only a small proportion of cases lead to criminal charges.

Mr Wray said that "some" of the violence against police is "tied to the violent crime problem as a whole".

But, he said, authorities believe that "an alarming percentage" of the officers killed were targeted and "killed through things like being ambushed or shot while out on patrol".

"Wearing the badge shouldn't make you a target," he added.

Mr Wray did not disclose how many of the 73 officers were targeted in such a manner.

In January, however, the Fraternal Order of Police (FOP) said that it had recorded 103 "ambush-style attacks" on officers in 2021, resulting in 130 officers shot and 30 killed.

In 2020, the FBI's own data estimates that murders rose 29% from 2019, the sharpest increase since national-level record keeping began in 1960.

A separate analysis of data from 22 cities released by the Council on Criminal Justice in January found that murders rose 5% in 2021, and have gone up 44% since 2019.

"Certainly the pandemic didn't help," Mr Wray said of the spike in murders.

"We're seeing more and more juveniles committing violent crime, and that's certainly an issue. We're seeing a certain amount of interstate gun trafficking. That's part of it. And we're seeing an alarming frequency of some of the worst of the worst getting back out on the streets."

While the number of people killed by officers is harder to track, a running tally from the Washington Post estimates that about 1,000 people have been shot dead by police in each of the last seven years.

In a high-profile incident in January, two members of the New York Police Department were fatally shot in January while responding to a call about a domestic disturbance in a Manhattan apartment building.

The suspected gunman was killed by a third officer.