No government should have to reveal evidence of foreign forces undermining security, just as there is no need to show people the coronavirus to require the wearing of face masks, Hong Kong’s former leader Leung Chun-ying has said.

Leung drew the analogy at a book launch event on Friday as he urged educators to raise awareness among youngsters about the continual existence of security risks despite the implementation of a Beijing-imposed national security law two years ago.

“Some friends often asked me: ‘You said foreign forces were undermining political security in Hong Kong. What evidence do you have?’… No government in the world lists out evidence [showing] which countries had affected their security,” he told dozens of teachers and students at the event. 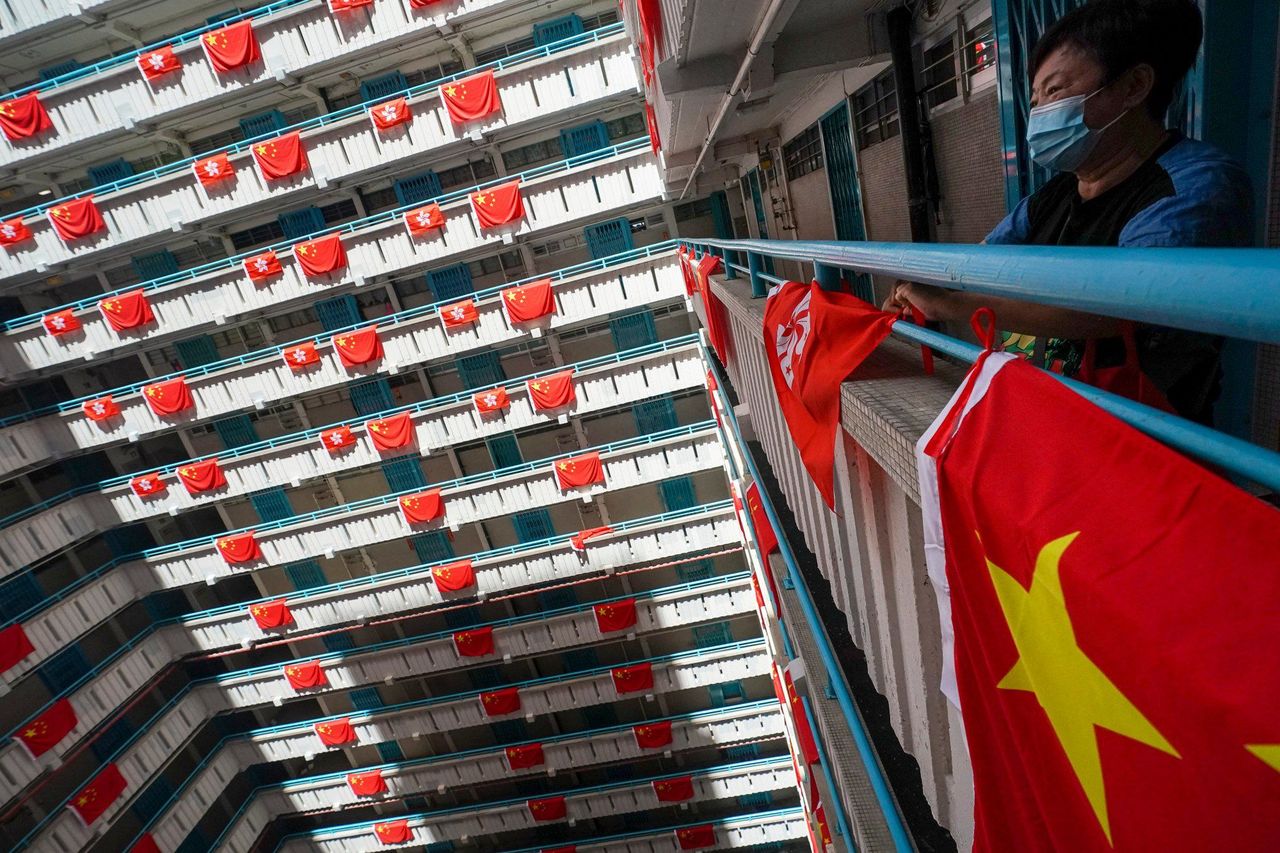 Flags were seen at Lam Shek House at Ping Shek Estate in Ngau Tau Kok on the 25th anniversary of the city’s return to China.

“It’s like everyone sitting here with your masks on and your hands washed frequently. I believe no one has ever seen the coronavirus with their bare eyes under the microscope … No one has ever asked the government to show him or her the virus when being asked to keep their masks on.”

Leung, who was chief executive from 2012 to 2017, said the government under his leadership had taken action to combat destructive forces, albeit on a smaller scale than what was accomplished with the national security law introduced in 2020.

Now a vice-chairman of the Chinese People’s Political Consultative Conference, Leung said more had to be done to improve education as awareness and understanding of national security among young people was still insufficient “due to historical reasons”.

Leung was attending the launch of a book that examines 70 national security-related cases from around the world divided in 16 categories.

The 205-page book, which does not have an official English title, was published by pro-Beijing youth group Youthinkers and edited by Joanne Cheung Shui-lin, who took part in Chief Executive John Lee Ka-chiu’s campaign when he ran for the top post without any competition.

Cheung, who hosted the event, thanked the Hong Kong United Foundation, which was set up by supporters of Leung, and said the former leader had contributed his insights to the book.

The case of restaurant worker Leon Tong Ying-kit, who was jailed for nine years last year on national security charges, was cited in a chapter about territorial security. It is the only case about the city’s national security law in the book.

Other chapters cover political, military, economic, cultural and internet security, among other topics.

National security education has been embedded in various subjects in the official curriculum of local primary and secondary schools since September last year, although a survey conducted around the same time showed that nearly half of the interviewed schools had indicated they had encountered difficulties in designing content and teaching materials.

Some fundamental elements of national security education formulated by the Education Bureau included developing students’ sense of belonging and affection for the country’s people, as well as a sense of national identity and an awareness of a responsibility to safeguard security.