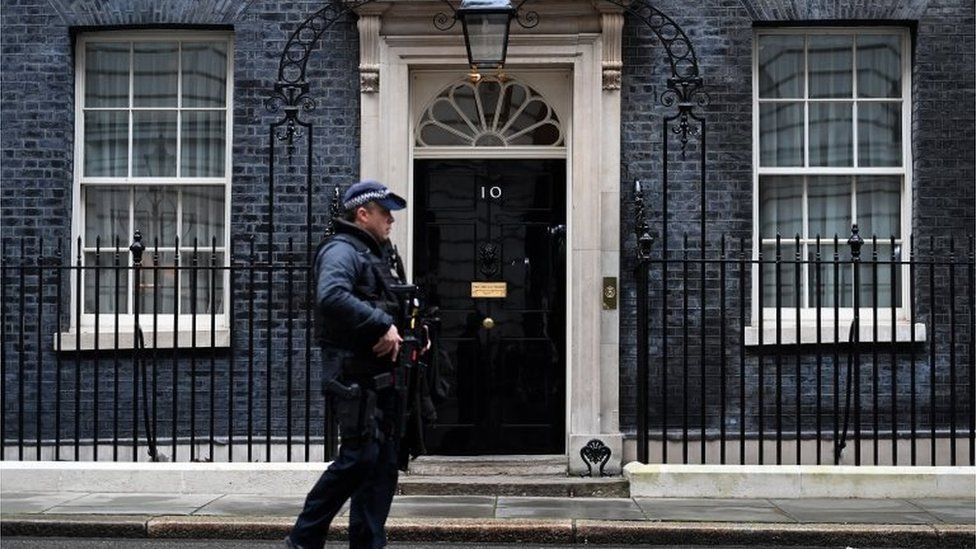 Senior Downing Street political staff had to intervene during the first half of 2021 to prevent events at No 10 - such as leaving parties - going ahead, sources have told the BBC.

The proposed events - suggested by staff, not politicians - would have taken place during the roadmap out of lockdown, which saw restrictions gradually lifted.

Indoor hospitality in England was banned until 17 May 2021 and outdoor mixing - in groups of six - wasn't permitted until 29 March 2021.

The prime minister is coming under pressure, following allegations he attended a lockdown drinks in the Downing Street garden on 20 May 2020.

On Monday, ITV published an email from the prime minister's principal private secretary, Martin Reynolds, inviting around 100 staff to the "socially distanced drinks".

Witnesses have told the BBC Boris Johnson and his wife had been among about 30 people at the event.

Mr Johnson has not denied he was at the party, instead pointing to an ongoing investigation into gatherings held in Downing Street.

Former No 10 insiders say those "socially distanced drinks" set a precedent: if a senior civil servant such as Mr Reynolds could give approval to this event, it was unsurprising that more junior staff felt it was acceptable to hold a Christmas party later that year.

One of them said the 20 May drinks had "lowered the bar" for future events.

Last Friday, the former senior Downing Street aide Dominic Cummings said he had made it clear in writing that the 20 May event should not go ahead.

But it has now become apparent he was not a lone voice.

A fellow adviser told the BBC that they were "furious" that the drinks took place.

And another senior member of the political staff at No 10 also tried unsuccessfully to have the event called off.

A former senior staff member said there had been detailed discussions about meetings which took place outdoors to ensure regulations were observed, but - in their opinion - there had been "no legal basis" for the "bring your own bottle" event on 20 May 2020.

A long-standing Conservative MP predicted that Sue Gray, the civil servant who is conducting the internal inquiry, would "let the PM off on a technicality" - that Downing Street was both a household and a place of work.

However, some of those who worked at No 10 at the time maintain that no such loophole would have been credible.

The latest revelations have resulted in a high degree of jeopardy for Boris Johnson.

One former member of his staff questioned whether the 20 May event could have gone ahead without his approval, given the resistance to it from key political staff.

A Conservative MP who is well placed to gauge backbench opinion told the BBC that the mood was now hardening against the prime minister.

He suggested that Mr Johnson's behaviour was "impugning the reputations of Conservative MPs".