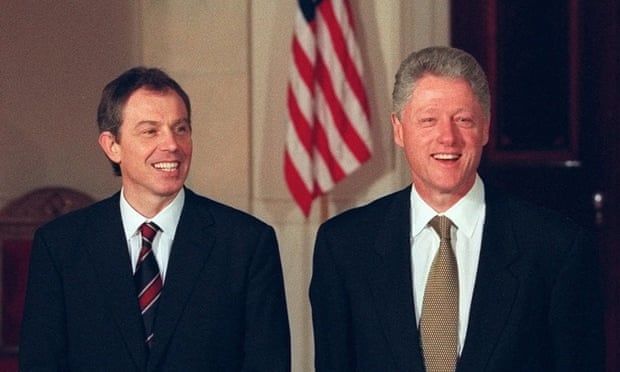 No 10 hired US lawyers to advise on the legal position of the US president, Bill Clinton, at the time of the Monica Lewinsky scandal before Tony Blair’s official 1998 visit to Washington, previously secret documents reveal.

The British prime minister’s visit was overshadowed by Clinton’s relationship with the White House intern, with the UK’s US ambassador, Sir Christopher Meyer, describing Lewinsky in one cable as “the phantom at the feast”.

As Downing Street put finishing touches to Blair’s programme, Clinton had famously denied “sexual relations with that woman, Miss Lewinsky” while the Drudge Report published allegations she had kept a stained dress.

The developments led No 10 to quietly drop plans for Cherie Blair to attend a Washington meeting on the White House intern scheme during the visit. Philip Barton, Blair’s private secretary, wrote to Cherie’s adviser, Fiona Millar: “I have been reflecting on the impact of the latest allegations about a White House intern. Do you think it would be prudent to drop this part of the programme for now, in case the press gets wind of it?”

A later memo, from Barton to the Washington embassy, noted: “For obvious reasons, we do not want a meeting on interns to appear in the programme.”

Blair flew to Washington in February 1998 at the height of special prosecutor Kenneth Starr’s wide-ranging investigation into the conduct of Clinton and his wife, Hillary. Starr had originally been appointed to look into the Clintons’ financial dealings but his inquiry had been expanded to cover allegations of sexual harassment made by Paula Jones, an Arkansas state government employee, and claims the president had an affair with Lewinsky.

A background briefing fax from John McInespie, a lawyer at the Washington law firm Sutherland, Asbill & Brennan LLP, on Clinton’s legal position. It said: “So far our people say that there is no ‘smoking gun’ to charge Clinton with anything, but that might not be the case by the time of the forthcoming visit of the prime minister.”

It added if Lewinsky stuck to her original affidavit, denying she and Clinton had sexual relations, then “all she has to do is face the embarrassment of being branded a “bullshitter – (a term of art)”, but if her lawyer got her full immunity, “this strategy is highly dangerous to President Clinton”.

The White House was grateful when Blair, at a joint White House press conference, publicly praised Clinton as “someone I am proud to call not just a colleague, but a friend”.

Meyer noted in a feedback cable: “The tension shown by Clinton and his staff before the press conference was matched only by their relief afterwards. Clinton was at his Houdini best.” Meyer added that Jim Steinberg, the deputy national security adviser, told him: “Your prime minister didn’t have to say what he did at the press conference. We owe you big time.” Meyer added: “The task will be to call in the debt at the right time.”

In another memo from Meyer to the Foreign Office, he said he had visited George W Bush in Texas, then considering running for president. “Bush admitted that, apart from Mexico, he did not know much about international affairs and that he would do well to broaden his experience,” Meyer wrote. Bush would go on to serve two terms as president between 2001 and 2009.

Bush remarked Blair “seemed like a good fellow”, Meyer added. “As the only other Labour politician he appeared to have heard of was Michael Foot, I offered a rapid potted history of how Labour had moved on since then.”
Add Comment