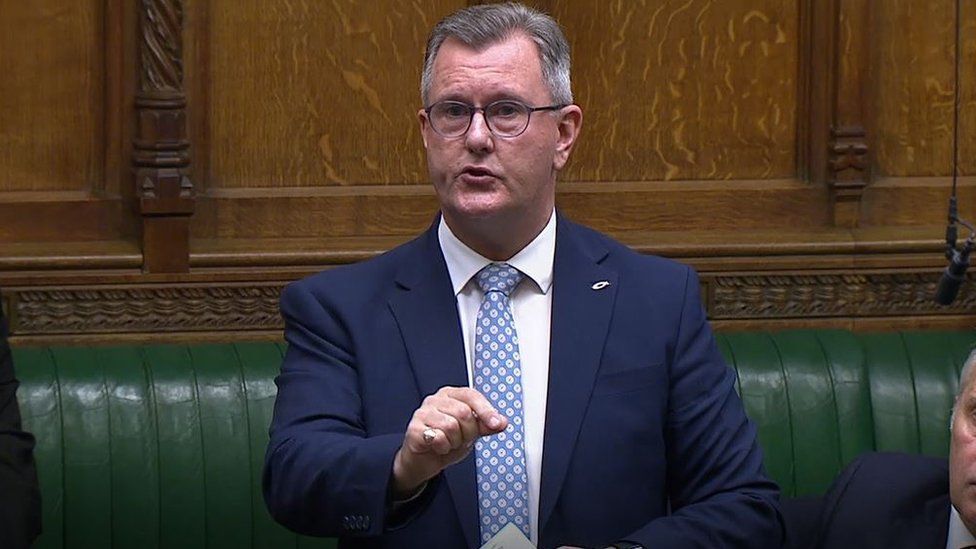 The DUP leader has said he will not give up his role as MP at Westminster until the NI Protocol is "resolved".

Sir Jeffrey Donaldson has been elected as an assembly member for Lagan Valley.

Under rules that do not allow MLAs to hold more than one role, he has eight days to decide whether to leave Westminster for Stormont.

Meanwhile, Sinn Féin's Michelle O'Neill has warned the prime minister people cannot be left "high and dry" by the DUP's refusal to form a government.

Should Sir Jeffrey leave Westminster, it would prompt a by-election for the Lagan Valley Westminster constituency.

Speaking in the Commons on Tuesday, he said he would not leave Parliament until the protocol is dealt with.

His party is refusing to nominate a deputy first minister and re-enter power-sharing in Northern Ireland, in opposition to the post-Brexit trading arrangement.

Unionists oppose the protocol as they say it poses a risk to the UK union and damages trade. 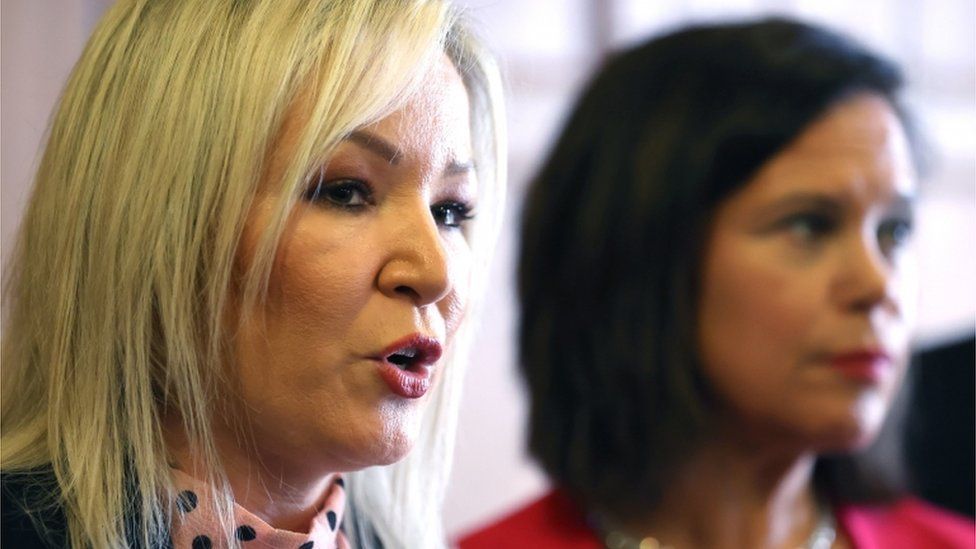 Sir Jeffrey said he would not return to Stormont until he could be sure "the political institutions in Northern Ireland have a stable foundation".

He could instead co-opt another DUP member to fill the Lagan Valley Stormont seat in the interim.

The first sitting of the Northern Ireland Assembly - in which Sinn Féin is now the largest party - is scheduled to take place on Friday.

However, there will be no governing executive without the DUP's support as the second largest party.

Instead, ministers continue to run their respective departments, but no new decisions, such as agreeing a budget, can be taken.

This was designed to ensure free trade across an open Irish border, but it has in turn created some new trade barriers for the movement of goods across the Irish Sea.

In February, the party removed Paul Givan from his role as first minister in protest against the protocol, triggering the collapse of the Northern Ireland Executive.

They said the protocol had undermined Northern Ireland's position in the UK.

In the Queen's Speech on Tuesday, the government outlined that issues created by the protocol "continue to stand in the way of an executive being formed".

It said the protocol "needs to change" and called for new imagination and flexibility from the EU.

Earlier, Taoiseach (Irish prime minister) Micheál Martin said he had stressed the need to intensify EU and UK discussions to avoid any unilateral action during a discussion with Mr Johnson on Tuesday.

Sir Jeffrey said he made it clear to the prime minister that he would not be "moving on the political institutions" until the government had taken action on the protocol.

He said he would not be setting a timeframe for this, but that he was a "realist and an optimist".

Ms O'Neill said the public could not be a pawn in the British government's game of chicken with the EU.

"Time to form an executive now," she said in a social media post.

A Downing Street source told BBC News that the prime minister spent an hour on the phone to Northern Ireland's political leaders.

They added the government would act "responsibly" with regards to the protocol and its negotiations with the EU.

The calls followed meetings held by the Northern Ireland Secretary on Monday with the leaders of Stormont's five largest parties.

Sinn Féin won the most seats in the assembly election - 27 out of 90 - after Thursday's vote.

This means the party can nominate Northern Ireland's first minister, an unprecedented move for a nationalist party, but it is reliant on the DUP taking up its position as deputy first minister.

The roles form a joint office, with equal responsibility, however, the allocation of the titles is regarded as symbolically important.

Ulster Unionist Party (UUP) leader Doug Beattie said the Northern Ireland Protocol should be dealt with as the obstacle to a functioning executive at Stormont.

"We all know what the landing zone is, no checks on goods from Great Britain to Northern Ireland if they are staying in Northern Ireland. That gets rid of the border down the Irish Sea.

"The EU Commission know this, the UK government know this and all five political parties who would form the executive know this also."

The Social Democratic and Labour Party (SDLP) has said it will be going into opposition after Thursday's vote in which it returned with eight assembly members (MLAs) after losing four seats.

The party will not be replacing its deputy leader Nichola Mallon in her role as infrastructure minister, after she failed to get elected in Belfast North.

The Democratic Unionist Party says it will not join a power-sharing government without action on the protocol
Michelle O'Neill says the assembly election shows that the public want to see a new Northern Ireland Executive formed.
#boris johnson  #johnson
Add Comment