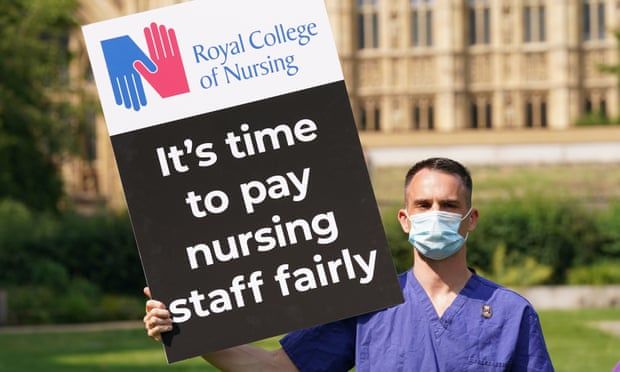 NHS staff in England have suffered real-terms falls in their pay of up to £2,949 over the last decade, new research by a leading health thinktank shows.

The findings are contained in a Health Foundation analysis of official NHS staff earnings data covering the 10 years from March 2011 to March this year. They come amid a growing row about the government’s decision to award most NHS staff in England a 3% pay rise for this year, and the possibility that health unions may take industrial action after assessing their members’ views.

Some NHS staff have had a real-term rise in income since 2011. The Health Foundation found that ambulance staff now earn £2,767 more, while NHS infrastructure staff are on average £645 better off and those supporting clinical staff have had a tiny £63 rise.

However, overall the 1.2 million staff in hospital and community services are £462 a year worse off than they were in 2011. That reflects a decade in which most NHS personnel received either a very small annual salary rise of about 1%, or had their pay frozen. 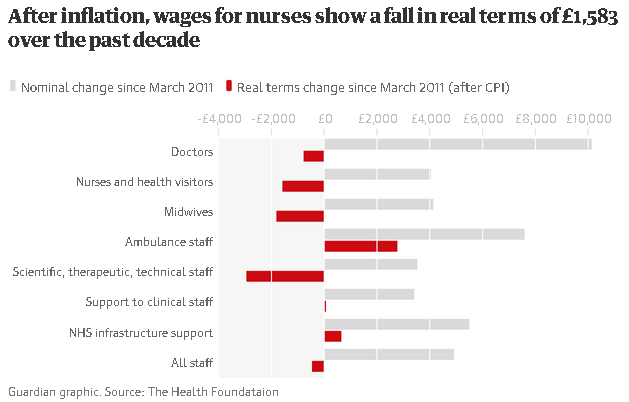 For example, the pay of nurses and midwives has risen in nominal, or headline, terms by £4,044 over the last decade, but after adjusting for inflation it fell in real terms by £1,583. The Royal College of Nursing responded to the 3% offer by warning that “the profession will not take this lying down”, and is likely to ballot its members about possible industrial action.

Prof Anita Charlesworth, the thinktank’s director of research and of its Real Centre, which undertook the analysis, said: “This week’s pay offer to NHS staff is higher than originally proposed, but this comes off the back of a decade of government holding down pay to balance NHS budgets.

“After accounting for inflation, pay declines are particularly evident for nurses and health visitors, midwives, and scientific, therapeutic and technical staff. Some groups have experienced real-term increases in basic pay, notably ambulance staff (around £2,800) and infrastructure support staff (£600).”

Nihar Shembavnekar, who undertook the analysis, used the consumer prices index method of measuring inflation in his calculations. He is a former Treasury labour market economist.

Meanwhile, a separate analysis published today by the GMB union found that the pay of NHS workers in England has fallen by up to £9,000 over the last decade.

“Long-serving cleaners have had more than £1,000 pinched from their pay packet every year, 999 call handlers £3,500, nurses more than £6,000 [and] midwives more than £7,500”, the union said. It based its calculations on the retail prices index, the other way of assessing the rate of inflation.

Rehana Azam, the GMB’s national secretary, said that the union would be advising its members to reject the government’s “paltry” 3% offer.