NHS bosses have warned the impact of Wednesday’s ambulance strike is likely to be worse than the one before Christmas.

Unison members at the London Ambulance Service are among the thousands of paramedics and support staff walking out across the UK, by staging a 12 hours strike from 11am on Wednesday in a dispute over pay.

NHS Providers has warned this strike, the second this winter, would be harder to cope with, with the NHS in an “even more precarious position.”

Their warning came after after the chief executive of the London Ambulance Service, Daniel Elkeles, earlier on Tuesday urged Londoners to only call 999 during the strike “if it is a life or limb-threatening emergency”.

Under trade union law, life-preserving care must continue. The most urgent calls will be attended to, while local agreements are in place between services and unions over other calls.

Miriam Deakin, NHS Providers’ director of policy and strategy, said it understood why “overworked” ambulance workers were striking, but that pressures on the NHS had already worsened since the last strike.

“Since the last strikes, delays transferring patients from ambulances to hospitals have gotten worse as pressure across the whole of the NHS increases,” she said.

“Trust leaders are working hard to minimise the impact on patients and to support staff during the industrial action but they are braced for another day of significant disruption and knock-on effects.”

The BBC reported highest-category calls, for immediately life-threatening emergencies such as cardiac arrests, will be covered during strikes, but not every emergency in the next category down, which includes heart attacks and strokes, will be provided for.

However London Ambulance Service has confirmed it aims to get to all heart attacks and strokes.

Government sources involved in contingency planning said the lack of agreement over emergency calls was a concern.

But union leaders said detailed plans were in place to ensure lives were not put at risk, including exemptions for some union members expected to work during the walkout. Services will also bring in other NHS staff, alongside the military, to provide support.

NHS Providers called for “serious pay negotiations” between the Government and unions to avert further strikes.

Talks between Health Secretary Steve Barclay and health unions over strike action broke down on Monday.

Speaking earlier Tuesday, the LAS’ Daniel Elkeles urged Londoners: “Please keep 999 for when a life is at risk as this will help your fellow Londoners in their time of need.”

He stressed that during the previous strike day in December, call volumes to LAS 999 and 111 control centres dropped by a third, allowing ambulances to be sent to “our sickest patients”.

He said: “There will be fewer ambulances on the road and fewer staff in our control rooms answering and assessing 999 calls.

Some people may be advised to arrange “alternative transport” to hospital.

During the last paramedics strike on December 21, around 200 ambulances were on the road in London, compared with the normal 400 with 50 response vehicles.

A similar level of cover is expected tomorrow when 999 call handlers will also join the industrial action.

While the strike will last for 12 hours, LAS expects the impact on services to be felt into the following days.

Speaking on Tuesday, the Health Secretary Steve Barclay urged people with health concerns to call NHS 111 if needed ahead of ambulance strikes.

Speaking during a visit to St Charles Hospital in west London, he said: “Of course if people have an urgent call issue, it is important that they call 111. If they have an emergency then of course 999.

“But there will be pressure on the system tomorrow. So it’s important that people are bearing that in mind in terms of calling 111 if it’s an urgent matter.” 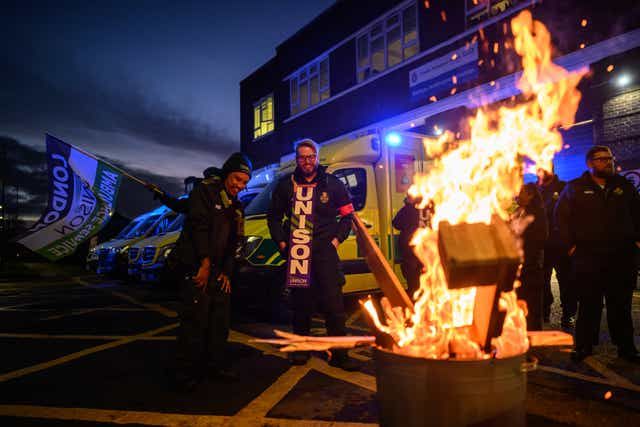 Unison members of the LAS will walk out for 12 hours from 11am on Wednesday
However, ministers and unions could be inching towards a deal to end the nurses and paramedics’ strikes.

Mr Barclay is exploring with Cabinet colleagues ideas raised by unions on Monday including a one-off payment or back-dating a 2023/24 pay rise to the start of this calendar year.

It would force the unions to provide a minimum level of service during strikes, and will initially apply to the rail network, paramedics and fire service.

It could be extended to cover other workforces including teachers, bus drivers and nurses.

Ministers are braced for a parliamentary battle, which could last six months, to get the controversial legislation through the Lords.

The Government is also expecting to fight unions in court over the anti-strike laws.

Business Secretary Grant Shapps defended the proposed laws which he stressed would ensure “life and limb must come first” during walk-outs on Tuesday.

The Business Secretary told Times Radio: “I don’t think any civilised society should have a situation where we can’t get agreement to, for example, have an ambulance turn up on a strike day for the most serious of all types of ailments.”

He added: “Everyone knows we want to bring these strikes, which in some cases, railways for example, seem to have turned into sort of forever strikes.”

He insisted that minimum service requirements would not result in NHS staff being sacked.

But Fire Brigades Union general secretary Matt Wrack said: “This represents one of the most shameful attacks on the democratic rights and liberties of working people in decades.”

Labour has vowed to repeal the anti-strike laws if it wins power.

Mr Barclay suggested to health unions on Monday that improvements in NHS efficiency and productivity could “unlock additional funding” for pay rises in 2023/24.

Sara Gorton, head of health at Unison, said there had been an “acknowledgement” from the Health Secretary during the talks that avoiding strikes over next year’s pay settlement would “involve a reach-back” into the current pay year.

It raises the prospect that the pay deal for 2023/24, which is due to be agreed in time for April, could be backdated and applied to the final quarter of the 2022/23 financial year.

Ms Gorton said the discussion on pay represented a “tone change” from the Government.

Nurses are also due to stage industrial action on January 18 and 19 in hospitals across the country, including six London NHS employers, and junior doctors are being balloted on a 72-hour strike in March.

It comes as London hospitals are experiencing their worst ever winter crisis amid a surge in flu and record waits for treatment in A&E.