Monday's front pages are wholly dedicated to Queen Elizabeth ahead of her state funeral in Westminster. 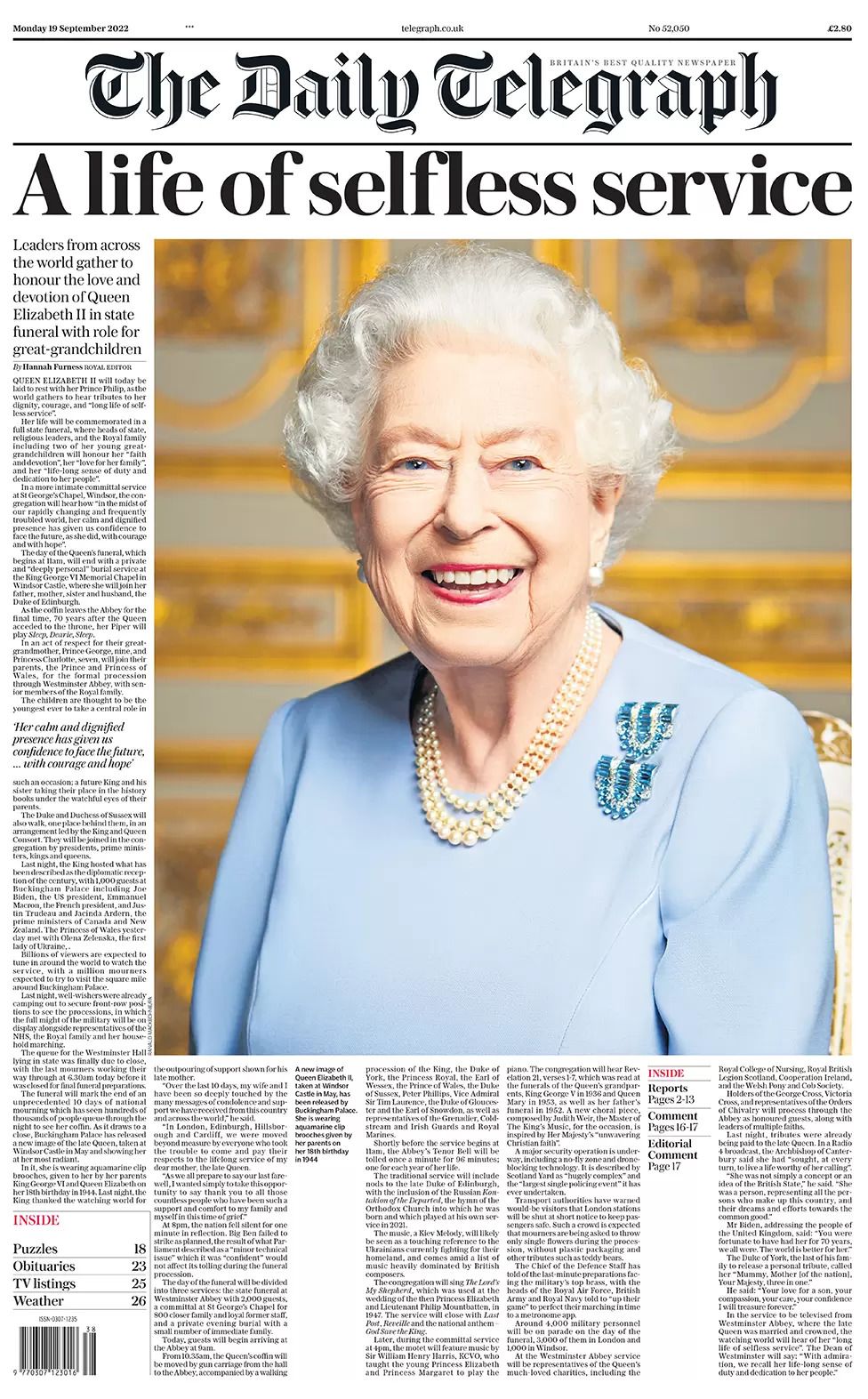 The Daily Telegraph carries the same photo of the Queen taken at Windsor Castle in May. The paper notes that she is wearing aquamarine clip brooches given to her by her parents on her 18th birthday in 1944. 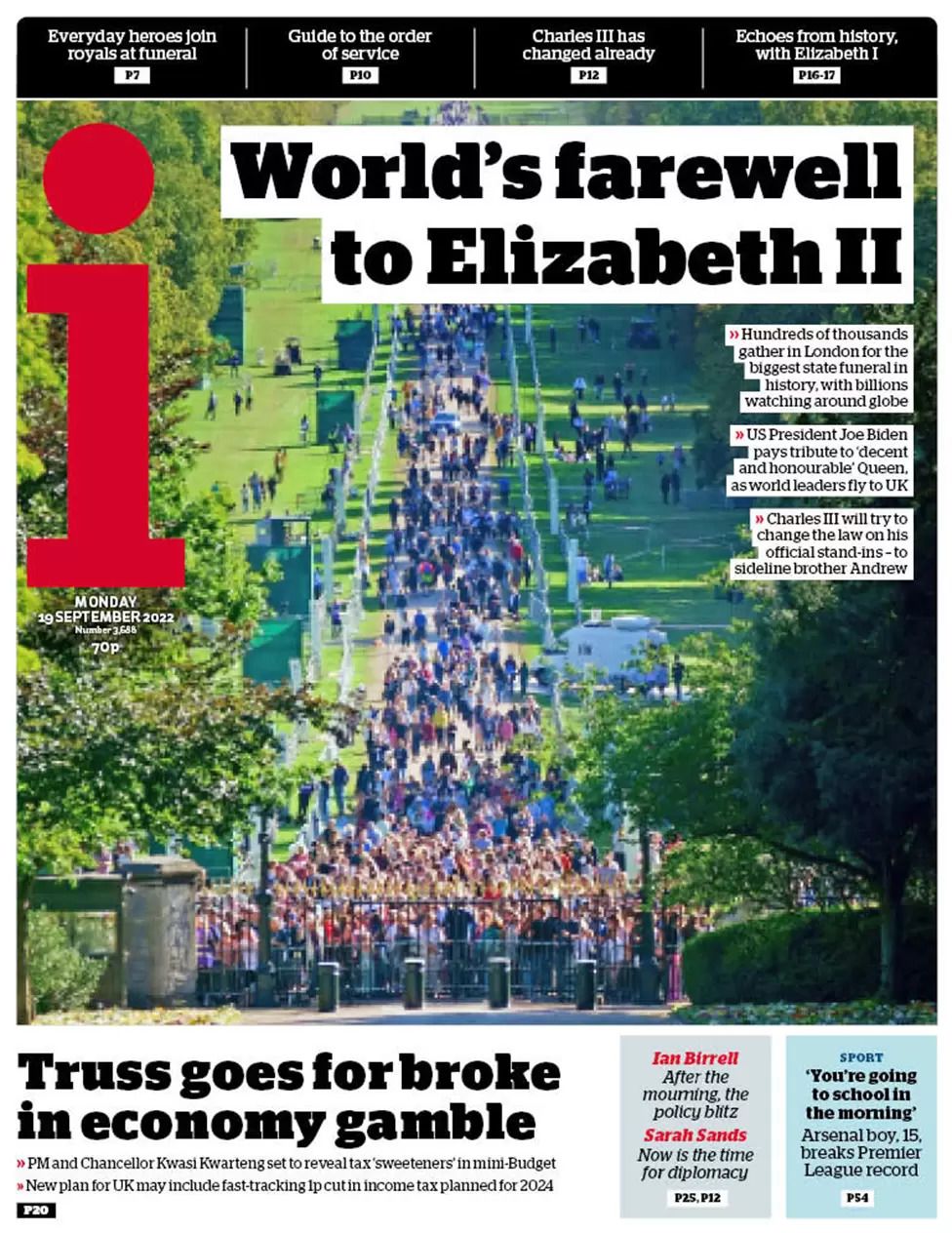 The i sums up the day with its headline: "World's farewell to Elizabeth II". It says hundreds of thousands are gathering in London for the biggest state funeral in history, with billions expected to watch around the globe. 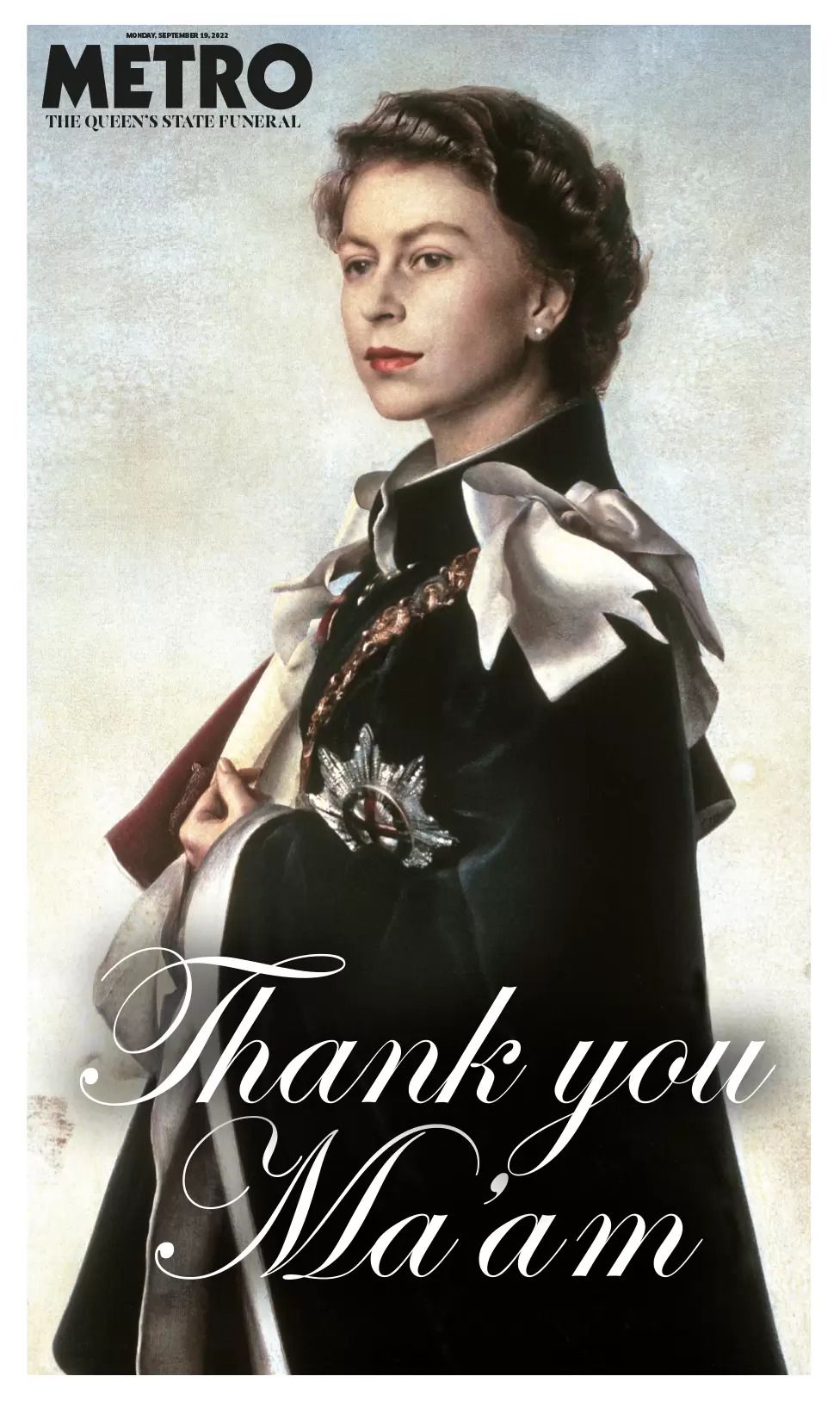 The Metro has a simple but striking front page, depicting the Queen in her younger years alongside the words: "Thank you Ma'am". 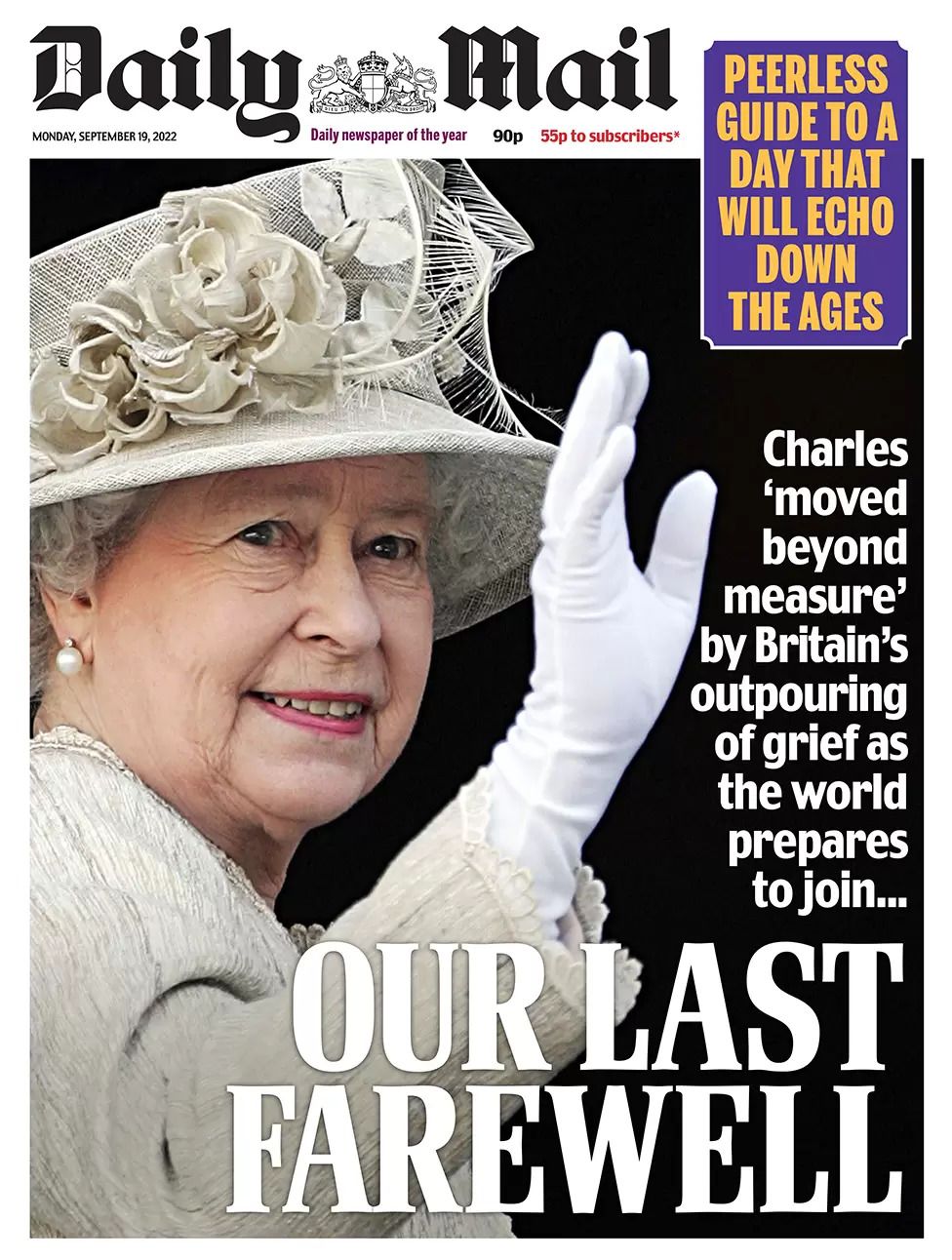 The Daily Mail leads on King Charles saying he was "moved beyond measure" by the UK's outpouring of grief at his mother's death. It marries a photograph of the Queen waving with its headline: "Our last farewell". 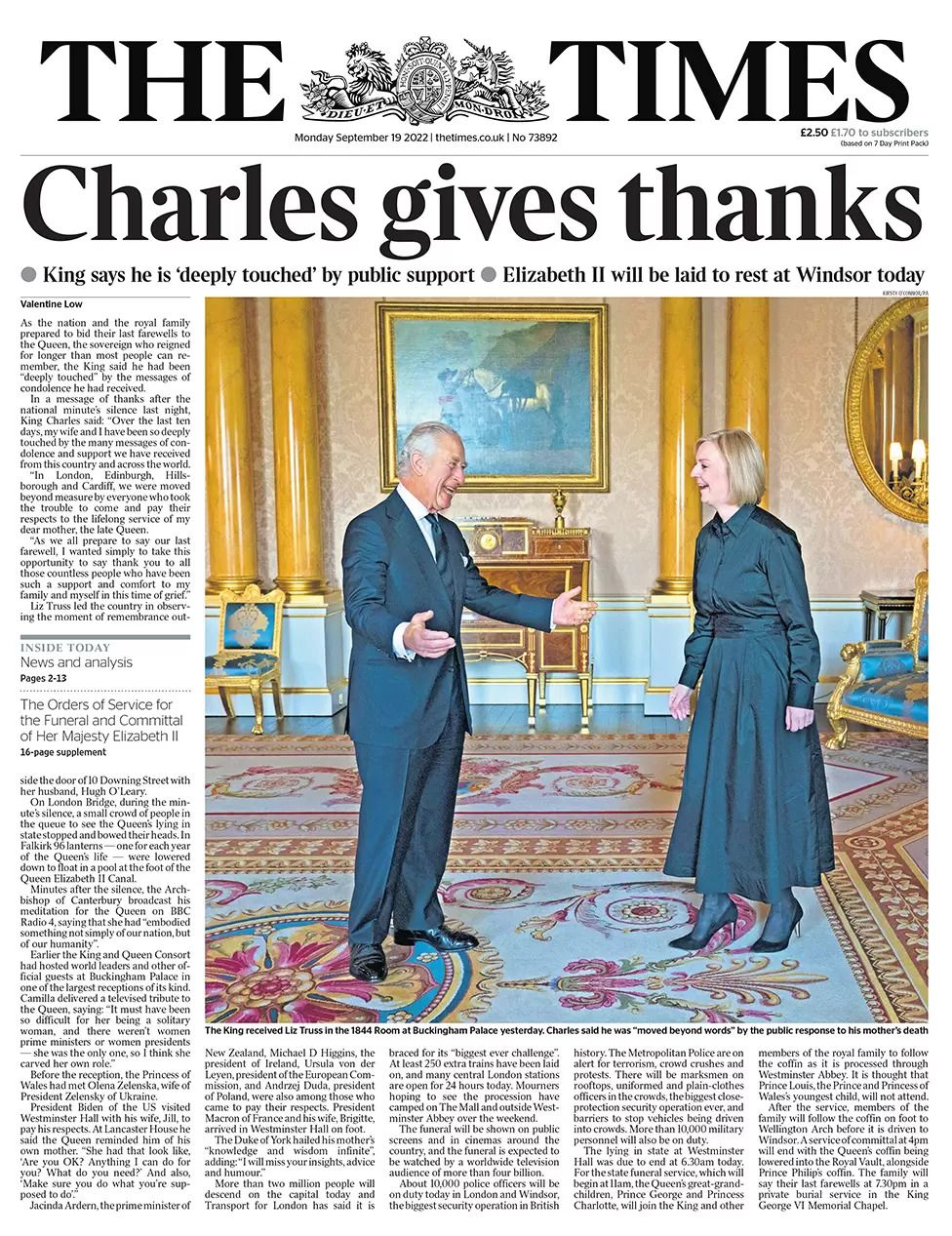 The Times leads on the same story with the headline "Charles gives thanks" alongside a picture of him sharing a lighter moment with Prime Minister Liz Truss at Buckingham Palace on Sunday. Elsewhere, the paper reports that about 10,000 police officers will be on duty today, as more than two million people are expected to descend on the capital. 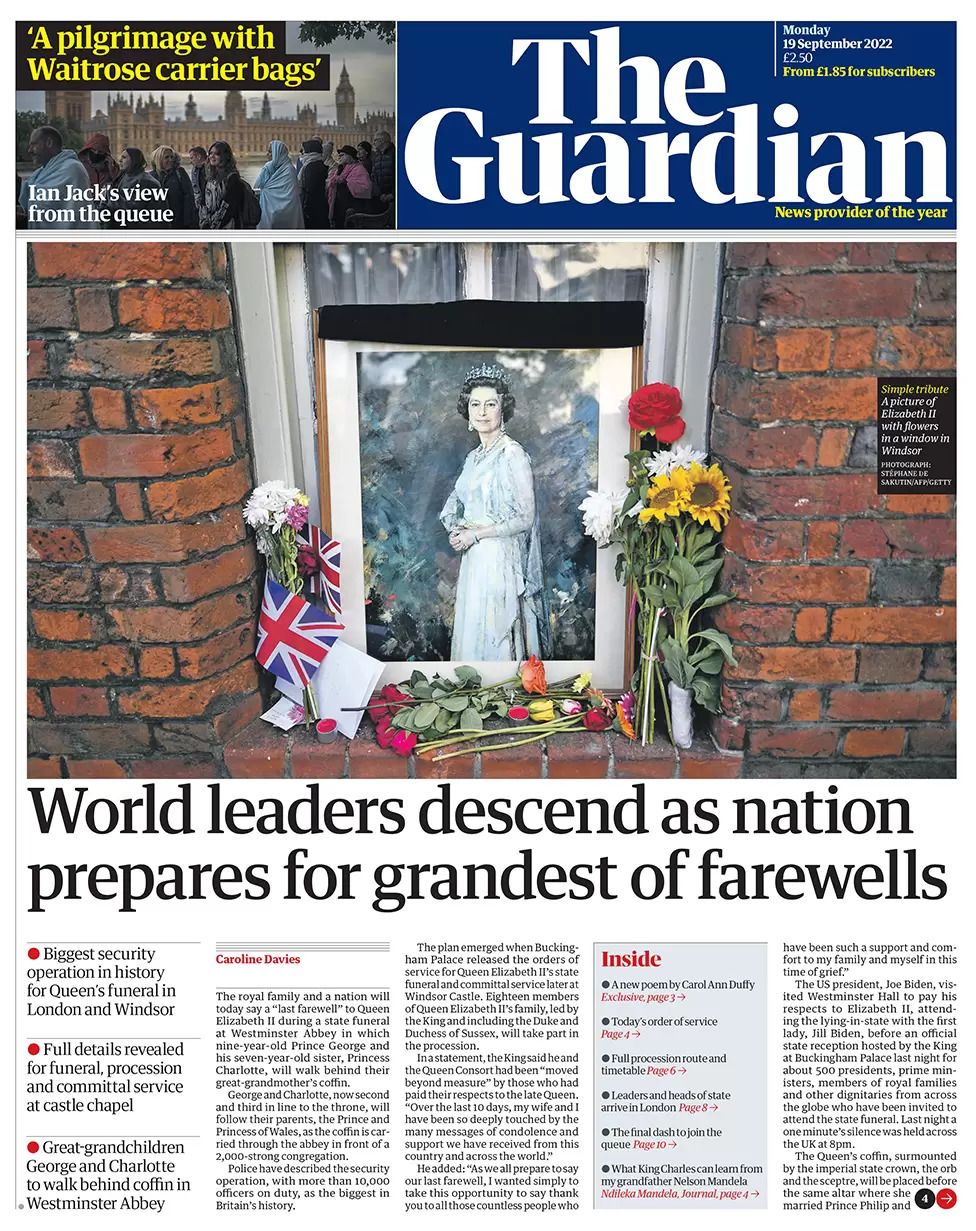 The Guardian picks out details from the funeral plans, saying Prince George and Princess Charlotte, who are now second and third in line to the throne, will follow their parents - the Prince and Princess of Wales - as the Queen's coffin is carried through Westminster Abbey. 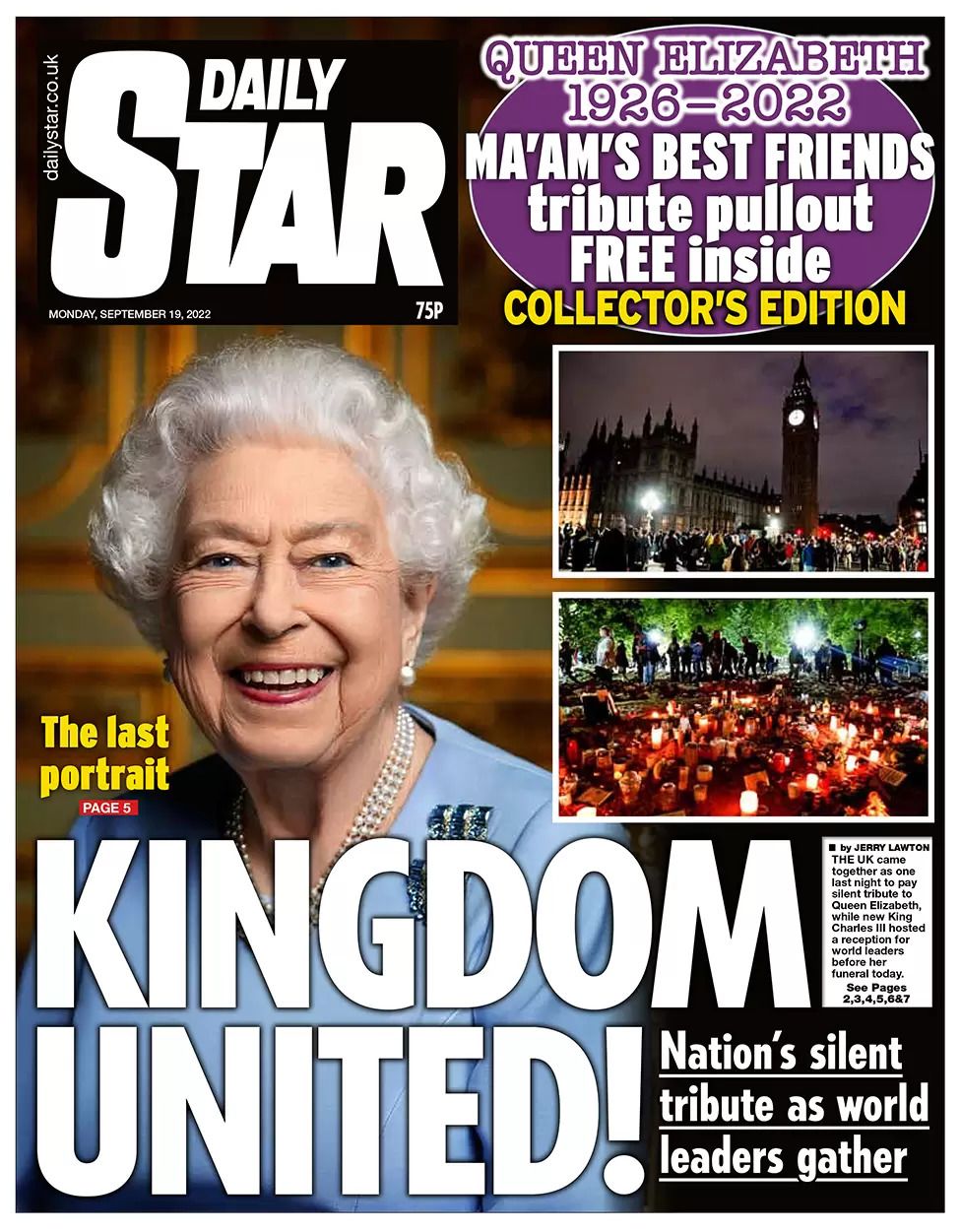 Never passing up the opportunity for word play, the Daily Star leads on the UK holding a one-minute silence for the Queen with the headline: "Kingdom United!" 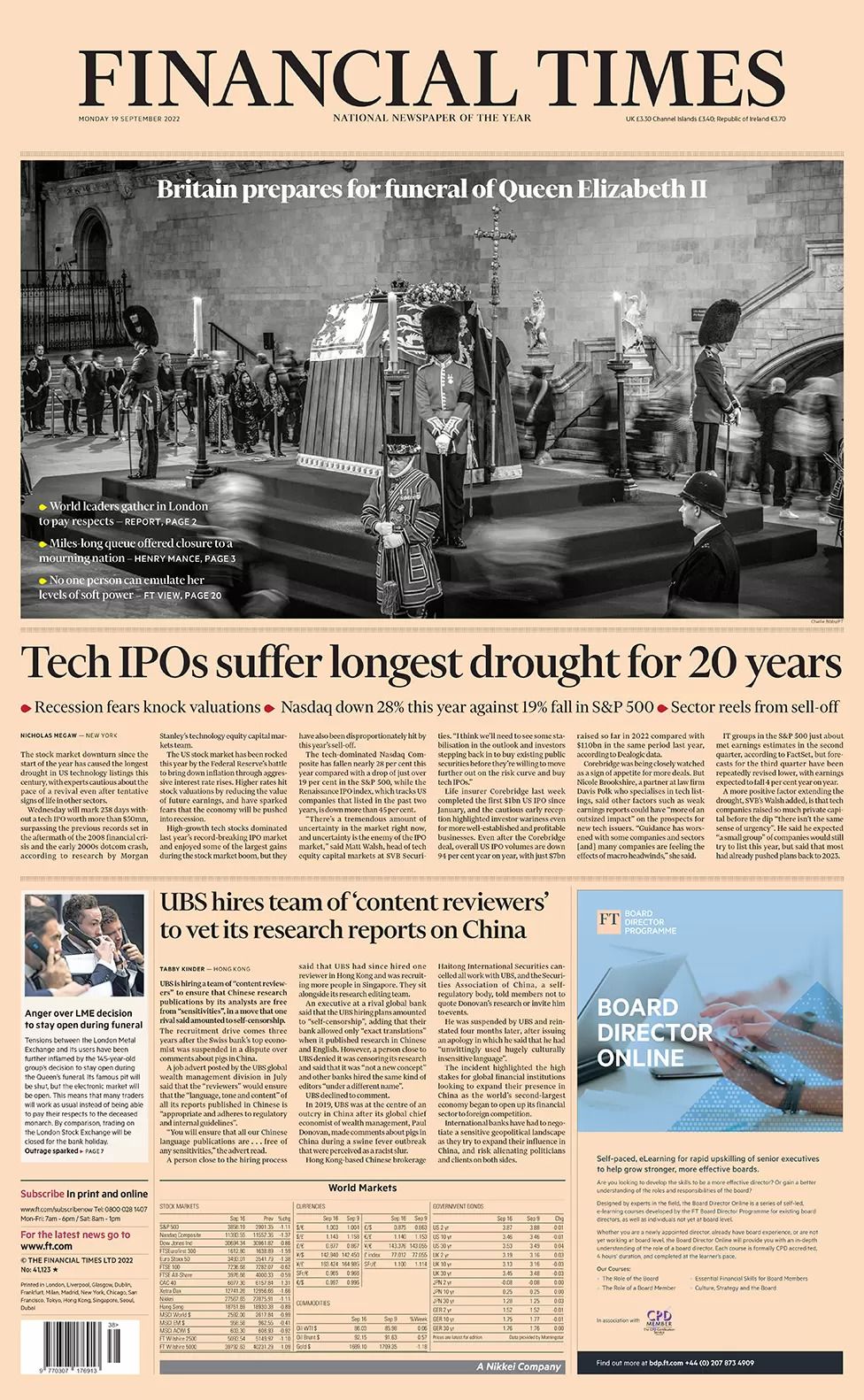 The Financial Times devotes the top of its front page to a black and white photograph of the Queen lying in state. However, its main story is about the downturn in the stock market causing "the longest drought in US technology listings this century".

A final portrait of Queen Elizabeth II appears on many of the front pages. The photograph, taken in May, shows her smiling, dressed in pale blue, wearing her characteristic pearls. It's captioned "Happy and Glorious" in the Daily Mirror, in the Daily Express: "Farewell our Glorious Queen", The Daily Telegraph: "A life of selfless service." The Sun frames the image in black, with the headline "God Bless".

The i looks ahead to what it says will be the "biggest state funeral in history" that'll be watched by billions around the world. The Daily Mail estimates that four billion - or half the planet's population - will see it. It picks up the Queen's global recognition in its front page headline "the world prepares to join our last farewell".

The Financial Times puts forward the view that no-one can emulate the Queen's levels of soft power. It suggests that a post-imperial and post-Brexit UK will need to seek and nurture other sources.

The Guardian notes that the Queen's great grandchildren, Prince George and Princess Charlotte, will walk behind her coffin. The Telegraph suggests they'll be the youngest children to take a central role in such an occasion. A source tells the Mail that their parents, the Prince and Princess of Wales, thought "long and hard" about whether the nine and seven-year-olds should attend.

The Daily Star speaks on its front page of the "Kingdom United" as millions joined a minute of silence last night in memory of the Queen. While the Sun pays tribute to what it describes as the more than 400,000 souls who devotedly braved the wait to see her coffin.

In other news, there's more speculation about the budget - with the Sun suggesting Liz Truss plans to cut the basic rate of income tax to 19p in the pound. The Times reports on economic analysis that suggests the aim to lower national insurance contributions will leave the poorest three million households only 63p better off each month.

The Express says the UK is bracing for a rise in flu cases after a spike in Australia. And there's a warning in the Star that the price of milk could soon exceed that of petrol per litre.

Finally the Mail says there's been a run on black hats in London ahead of the funeral. The paper suggests that even Princess Beatrice was affected by the shortage, being turned away empty handed from a department store in Bond Street.