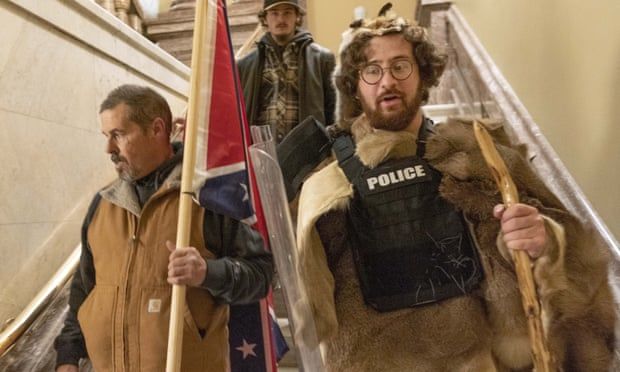 A New York state judge’s son who dressed like a caveman and helped a pro-Donald Trump mob storm the US Capitol has received a prison sentence for his role in the 6 January 2021 attack.

Aaron Mostofsky, 35, must spend eight months in prison – and after his release, he must spend a year under federal supervision while also performing 200 hours of community service, a US district court judge in Washington DC ruled Friday.

According to prosecutors, Mostofsky donned a caveman costume and wielded a walking stick while forming part of a deadly insurrection by Trump supporters who broke past a line of police officers trying to protect the Capitol on the day that Congress had convened there to certify Joe Biden’s win in the 2020 presidential election.

He broke into the Capitol through a door that was forced open, stole body armor and a riot shield from the police, and even gave an on-camera interview to a media reporter, prosecutors alleged in a summary of the case that Mostofsky endorsed.

Mostofsky, in the video interview, repeated Trump supporters’ lies that Biden had won thanks to election fraud. “The election was stolen. … We were cheated. … I don’t think 75 million people voted for Trump. I think it was close to 85 million,” Mostofsky said during the interview, according to court documents.

The government argued that Mostofsky’s theft of the police equipment left officers more vulnerable than they otherwise might have been.

Prosecutors have charged about 800 people in the attack. More than 250 have already pleaded guilty, mostly to misdemeanors, and about 160 have been sentenced.

Mostofsky in February pleaded guilty to felony civil disorder as well as two misdemeanors: theft of government property and entering and remaining in a restricted building or grounds. He technically faced up to seven years in prison when he appeared for his sentencing Friday in front of Boasberg, though defendants who plead guilty without going to trial generally don’t receive the harshest punishments available.