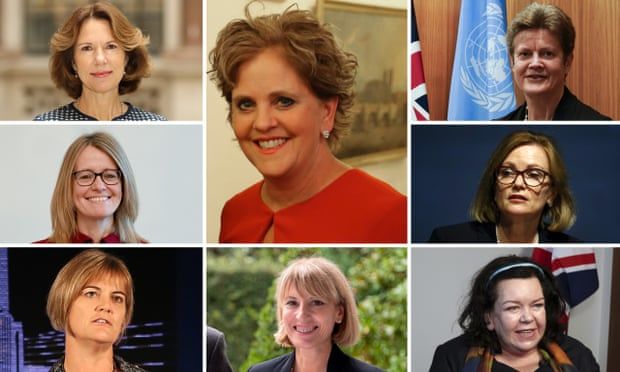 Women are to hold UK ambassadorships in all the world’s key postings after the role in Paris was given to Menna Rawlings, the first female appointee in British history.

It means women will represent Boris Johnson’s government – which has otherwise been criticised for being “incredibly blokey” – in the six other countries in the G7 group of top industrialised nations.

UK ambassadors in Berlin, Tokyo, Washington, Canberra, Beijing, Paris, Rome, Moscow and the United Nations in New York, among other places, are all women.

Until 1946, the Foreign Office banned women from diplomacy and until 1973 it required them to resign if they married. A rule requiring female diplomats to return to the UK – without keeping the job open – if they had a child in post was abolished even later. The first married female ambassadors were not appointed until 1987, 12 years after Margaret Thatcher became leader of the Conservative party.

Rawlings, who replaces the former chief of staff to David Cameron, Ed Llewellyn, has been preceded by 43 male British ambassadors in Paris. The former national security minister Dame Neville Jones quit the Foreign Office after she was passed over for the Paris appointment in 2006. Rawlings was previously high commissioner to Australia and later in charge of developing the “global Britain” concept.

Key Commonwealth postings include Victoria Treadell as high commissioner to Australia, Catriona Laing representing the UK in Nigeria and Susan Jane le Jeune d’Allegeershecque, who is UK high commissioner in Canada. Jane Marriott represents the UK in Kenya, identified by the foreign secretary, Dominic Raab, this week as a key area for the UK in the future.

The Foreign Office says that in the past decade the number of female heads of mission has tripled from 22 to more than 60 but it has only really been in the past five years that the most senior jobs have been given to women.

The process of feminising the top of the department, advocated by the two previous permanent secretaries, Sir Simon Fraser and Lord McDonald, is made easier by the fact that most postings last on average four years, giving regular opportunity to redress the gender balance.

Among the arguments put to a Foreign Office commission in 1934 for women not working in the diplomatic service included the idea that many countries were so different from Britain that “it would be extremely difficult for a woman to make the contacts, which form a large part of the work of diplomacy”.

It was also claimed that the introduction of a female officer into the intimate life of missions abroad would present difficulties in that she might have to live alone, which would excite “undesirable comment”, or she might have to share government-owned accommodation with another junior officer, which would be embarrassing unless the other officer was also female. Some held that “the physical constitution of women is not such as to enable them to bear the strain of continuous overwork in hot and unhealthy climates”.