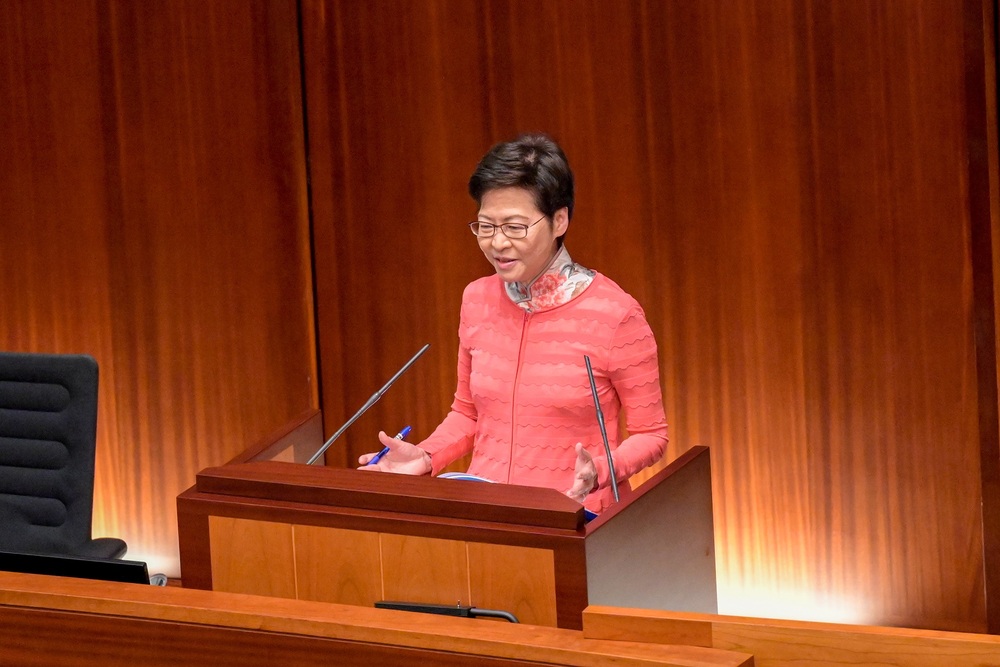 The government is "seriously" considering a new law to ban insults, not only to cover police, but to ban insults against other law enforcers and every Hong Kong citizen as well, Chief Executive Carrie Lam Cheng Yuet-ngor told lawmakers.

In a question and answer session at the Legislative Council on Thursday, Lam said the issue was not included in the policy address this year as officials are considering how wide the coverage of the legislation should be.

“I noticed that the legislation in Singapore also covers private security officers, so give us some time to consider the scope of the legislation. Perhaps at the next term of Legco, we’ll give you a report on our work,” Lam said.

She said legislating is only one of the means to solve the problem, with the best solution being increased awareness in society.

“In parts related to education, I emphasized the part about parental education.

Lam was responding to pro-Beijing Democratic Alliance for the Betterment and Progress of Hong Kong lawmaker Elizabeth Quat Pui-fan who asked for an update on whether a new legislation will be introduced to outlaw insulting the police.

Quat said police officers had often been insulted during their work in recent years, even including the late senior marine police inspector Lam Yuen-yee who lost her life in an anti-smuggling operation.

Netizens made a parody song mocking her death. Two firemen and a policeman were later arrested.

“This seriously hampered the dignity and authority of police officers, and increased the difficulty to enforce the law,” Quat said.

“After you delivered the policy address, many police officers told me immediately that they do not have sufficient dignity and do not feel relieved before the legislation is completed. Therefore I hope the Chief Executive can start it as soon as possible,” Quat said.

After the Legco meeting, Quat said the new legislation is necessary as existing laws are unable to tackle verbal insults.

“For example, the existing laws cannot deal with officers being insulted with foul language or insulting speeches online as they can only tackle cases in which physical harm is inflicted,” she said.

But Quat was unsure whether arguments between two individuals would constitute a breach of the planned legislation.

Barrister Albert Luk Wai-hung said the necessity of an additional law should be seriously considered, as there are already existing laws to protect police and other public officers.

One could be charged with misconduct in public places if they scold police officers, he said, adding that many people could accidentally breach the law.

“We should consider whether we need an additional law to suppress citizens, as legislation is not the only way to solve the problem. It could be done by education; there is something called self-discipline,” Luk said.

“We should consider if we should really not allow people to air their grievances towards public officers, which is acceptable sometimes. In a developed city, legislation is not the only way to administer the city. Too many laws will make the city filled with apathy,” he added.

Luk also said the law covering the general public is too much, but he called on the government to undergo extensive public consultation to assess citizens’ views.

“It is easy to legislate a law, but we have to consider whether the legislation is something that the citizens’ want to see,” he said.
Add Comment