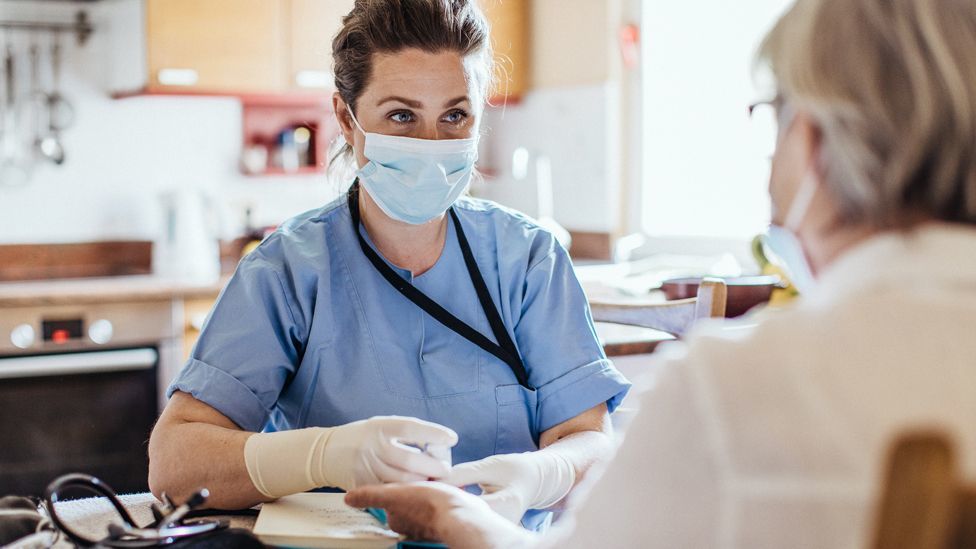 The justice secretary says social care must be properly funded but declines to "speculate" on plans.

Downing Street did not deny reports of an increase of at least 1% to improve social care and tackle the NHS backlog.

The justice secretary said he would not "speculate" but said there should be a "grown-up conversation" about how to pay for rising social care costs.

The move would break a Tory manifesto commitment at the last election.

"The British public are sensible enough to know that when it comes to the issue of social care we have to find some way in which it will be adequately funded," Mr Buckland told BBC Breakfast.

He said that the Conservative Party had also promised at the 2019 election that it would bring forward sustainable proposals to fund social care.

The Daily Telegraph reports that Downing Street favours a 1% rise in the national insurance rate, affecting about 25 million workers and self-employed people, as well as employers. But it says the Treasury is pushing for a 1.25% increase.

And the Times adds that Health and Social Care Secretary Sajid Javid wants a bigger rise of 2%.

But a source close to Mr Javid said that 2% figure was incorrect and the BBC understands the health secretary is pushing for a lower figure.

The Telegraph says the funds will be used to put a cap on the amount an individual has to spend on social care costs over their lifetime.

In their manifesto, the Conservatives said: "The prerequisite of any solution will be a guarantee that no-one needing care has to sell their home to pay for it."

The government said it was "committed to bringing forward a long-term plan to reform the social care system".

In a statement, it said proposals would be set out this year.

'The plan would need a hard sell'

Boris Johnson appears to be ready to break one promise in order to keep another.

He is considering going against a manifesto commitment not to raise national insurance in order to deliver on his vow to fix social care.

If the plan is put forward it will need a hard sell - to the public, most of whom will still pay large amounts towards care, and to Conservative MPs, for whom raising taxes is repellent.

How best to look after the elderly, disabled and others needing care is one of society's most pressing questions.

How to persuade the public to pay for it is the government's most pressing problem and a huge political challenge.

Labour said the NHS and social care needed proper investment but it was wrong to raise national insurance., which would disproportionately hit low-earners, young people and businesses.

"Boris Johnson still hasn't come forward with the plan for social care he promised over two years ago, and instead they're proposing a manifesto-breaking tax rise that would hit working people and businesses hard," said shadow chief secretary to the Treasury Bridget Phillipson.

It comes as former health secretary Jeremy Hunt wrote in the Daily Telegraph that there should be a new "health and care premium" added to tax instead, as he warned against raising national insurance or income tax.

Mr Hunt, who now chairs the Commons health committee, told BBC Radio 4's Today programme that the government must "bite the bullet" and find some way to increase taxes.

"The sums are eye-watering, far bigger than a chancellor can find down the back of a Treasury sofa," he said.

But he said a national insurance increase was the wrong approach because it would not be paid by pensioners.

"Since older people are the biggest beneficiaries I think it's only fair that they should make a contribution," Mr Hunt said.

National insurance is paid on the profits of self-employed people and the earnings of employees when they exceed £9,568 a year.

That has raised concerns that any rise to national insurance would affect low earners more than high earners.

What are the challenges facing social care?

*  An ageing population means growing demand
*  However, council spending in England is about 3% lower than in 2010
*  Age UK estimates 1.5 million people in England don't get the help they need
*  The fees local authorities pay for care - in a person's own home or a care home - vary hugely
*  People who don't qualify for free care are often charged more, with no maximum limit on costs
*  There are huge staff shortages - Age UK estimates there are about 45,000 vacancies

Boris Johnson has been under increasing pressure to set out his plan for social care reform.

Speaking on the steps of Downing Street on his first day as prime minister in 2019, he pledged to "fix the crisis in social care once and for all with a clear plan we have prepared".

But that plan has yet to be published.

On top of long-term funding challenges, the social care sector has also faced extra costs because of the pandemic.

Councils, which provide social care, have seen their budgets cut over the last decade.

The squeeze on council funding in England means that people who pay for themselves are often propping up the care system.

In England, social care is generally not provided for free. Typically, only those with savings and assets worth less than £23,250 can get help from their council.

There is no overall limit on costs, meaning thousands every year end up selling their homes to pay.

Personal care, such as help with washing and dressing, is free in Scotland for those assessed by their local authority as needing it. Those in a home still have to contribute towards accommodation costs.

The Scottish National Party said the UK government at Westminster should guarantee Scottish workers would not pay for an "England-only policy".

Some care costs are capped in Wales, and home care is free for the over-75s in Northern Ireland.