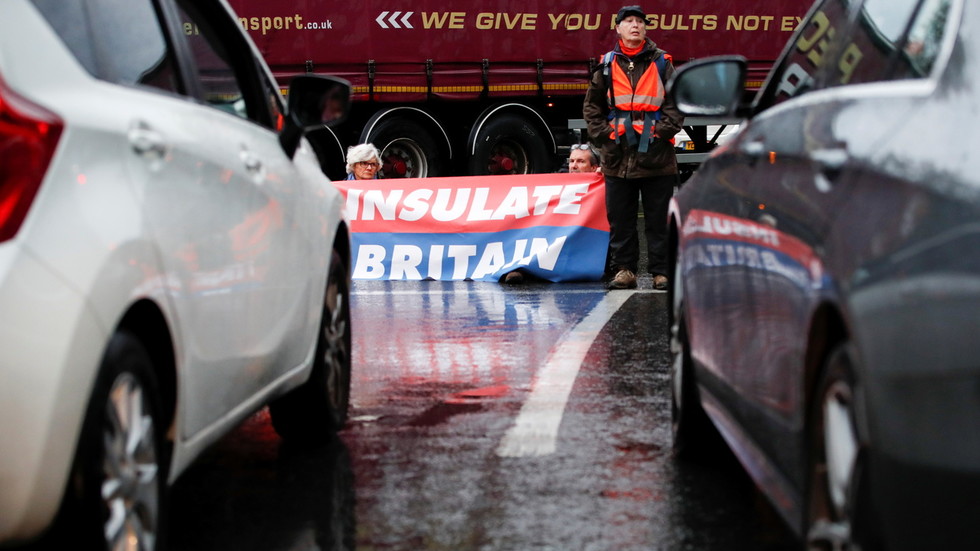 Eco-activists have blocked important roads around London, impeding motorists and infuriating British commuters demanding action on home insulation, after the government was granted a fresh injunction to prevent demonstrations.

On Monday, protesters from Insulate Britain, an offshoot of Extinction Rebellion who have been intermittently blocking London’s orbital motorway, the M25, in recent weeks, took their protest into the capital.

Activists can be seen employing their usual tactics, sitting on the tarmac at important intersections and creating long tailbacks as Londoners attempt to go about their daily lives.

The environmental group, who demand the government invest in insulating the homes of Britons, deemed an important part of reducing carbon emission, said around 50 activists were involved in Monday’s protest.

Activists have been reported at major arteries, including Hanger Lane, Arnos Grove, the Blackwall Tunnel and Wandsworth Bridge, seemingly on the south side.In one video, a woman can be seen pleading with the activists to move, stating that she is going to visit her mother in hospital. The activists don’t appear to acquiesce to her request and proceed to remonstrate with her.

In other footage shared online, motorists can be seen manhandling the protesters, pulling them off the road and creating gaps for cars to squeeze through.

Outspoken patriot and Brexiteer Nigel Farage was among those on Twitter calling for more action to prevent the activists from clogging up the capital. “Arrest, charge and imprison these Eco-terrorists now,” he wrote.

On Saturday the government was granted a new injunction by the court, banning activists from making their protest on Britain’s motorways and A-roads.

The government has been highly critical of the tactics used by the protesters. “The right to protest is a fundamental principle of our democracy but we will not tolerate guerrilla tactics that obstruct people going about their day-to-day business,” Home Secretary Priti Patel said on Sunday.