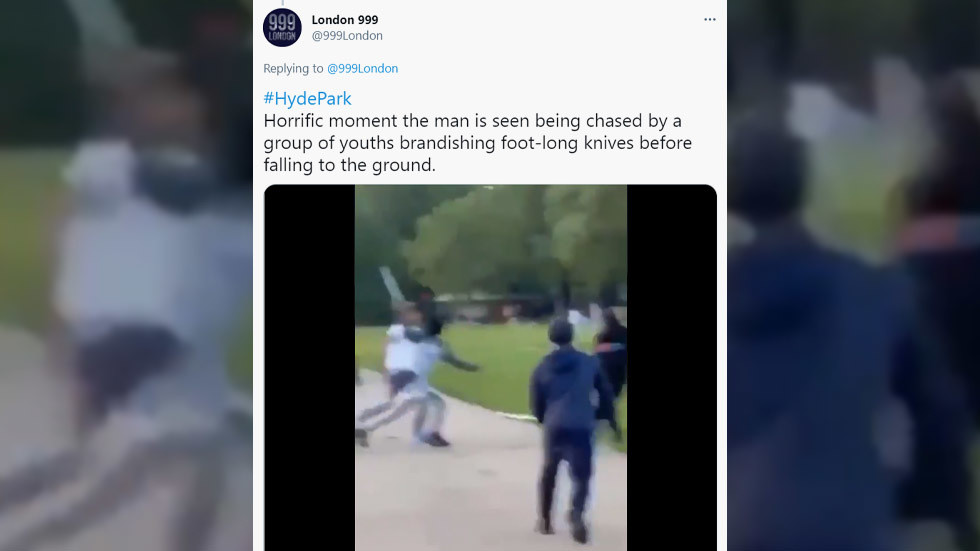 Disgusted Britons have taken to social media to condemn a violent attack on a young man by a group of black youths armed with machetes and long knives that took place in one of the city’s most prestigious parks in broad daylight.

Videos, which have been widely shared online, show a gang of unmasked black men, brandishing foot-long knives, chasing an individual who eventually falls to the floor. The young men beat and stab their victim repeatedly before fleeing in different directions.

Failed London mayoral candidate and actor-cum-singer Lawrence Fox called on the government to “stop and search every single youth in London on a regular basis.” Fox has been a constant critic of ‘woke’ Khan and his record on crime.

One user, who was also keen to blame Khan for the apparent deterioration in law and order, jokingly suggested Londoners start wearing medieval suits of armour as protection.

“Is Sadiq Khan Batman? What is he supposed to do?” another wrote, questioning those criticising the mayor. “Appear at Hyde Park and use his superpowers to get them to stop?”

The stabbing, which left a young man hospitalised, has also sparked further discussion on the apparent gang culture which exists within London’s black community. The attack comes just two weeks after Sasha Johnson, a Black Lives Matter (BLM) activist and mother of two who campaigned to defund the police, became an innocent victim of a shooting at a garden party.

“More black kids demonstrating to us that their lives clearly don’t matter,” one Twitter user wrote, ironically adding that there will be a vigil in Hyde Park today with woke liberals dropping to one knee.

While one user asked where the good black role models are, others questioned the BLM group's silence and its failure to comment when black-on-black violence takes place in the UK.

Another user suggested that more police presence would only escalate the situation, while “funding more extracurriculars” would prevent the youngsters from getting into criminal activities.

According to reports, the 17-year-old victim who was stabbed and beaten on Wednesday does not have life-threatening injuries and the police are asking anyone with information to come forward. No arrests have been made so far.