Households will be offered discounts on their electricity bills if they cut peak-time use on a handful of days over the winter, as part of National Grid's efforts to avoid blackouts.

The network operator has announced details of the scheme, which it said could save households up to £100.

There will be 12 "test" days initially, designed to see how customers respond, between November and March.

But only homes with smart meters will be able to take part.

Only 14 million, less than half, of households in England, Scotland and Wales, where the scheme is being tested, have a smart electricity meter installed.

Customers taking part will be given 24 hours' notice of a "test" day where they will be asked to reduce their peak-time electricity use if they can during a one-hour period identified by National Grid, likely to be between 16:00 and 19:00.

That could include delaying use of a tumble-dryer or washing machine, or cooking dinner in the microwave rather than the oven.

National Grid said it will pay energy suppliers, which will be required to sign up to the scheme to operate it for customers for a smart meter, £3 for every kilowatt-hour during the test periods.

What is a smart meter?

Smart meters replace your existing gas and electricity meters and measure the energy you use at home. The big difference is that they send this information directly to your supplier over wireless networks in real-time.

Suppliers say that this means you pay only for what you use, so bills are more accurate than estimated ones. It also means you can monitor your usage more closely and adjust your habits if you're looking to save money.

But if you live in an area with weak signal, your meters might struggle to communicate with your supplier effectively.

Individual suppliers will decide how much customers will receive and whether the money is taken off bills, credited to accounts, or if there's an option to withdraw the cash.

National Grid is testing the idea, which it calls its "Demand Flexibility Service", at scale for the first time, to establish a system that can serve as an "insurance policy" if it needs to ease demand on the grid this winter.

Households have been warned of power cuts lasting up to three hours at a time if gas supplies run extremely low, and National Grid is hoping the new scheme can, along with other measures, prevent that happening.

The electricity network operator said the service had been approved by the UK's energy regulator Ofgem, which meant electricity suppliers and providers could sign up and then advertise the scheme to customers. 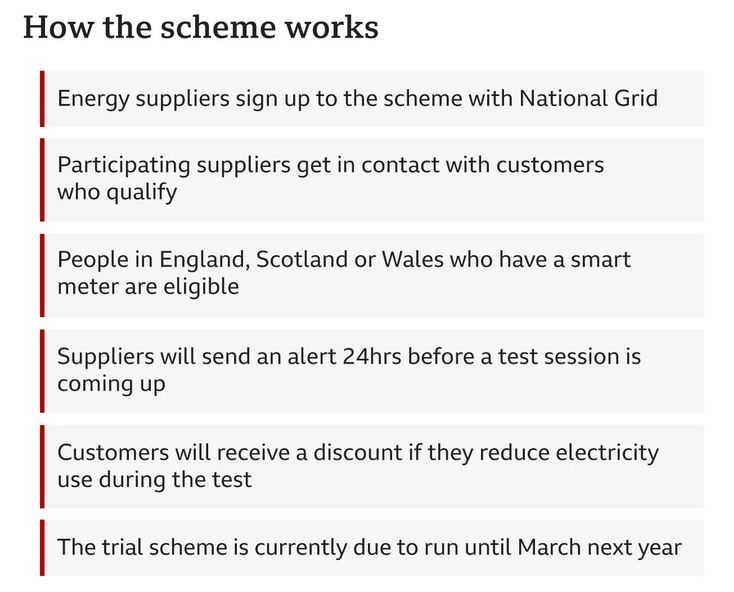 It is understood many of the UK's larger energy firms are looking to take part in the trial, after being consulted in recent months on how it would work.

The scheme is also open to businesses which could, for example, change production schedules or switch to batteries or generators at peak times.

Jake Rigg, director of corporate affairs at National Grid ESO, said by signing up people could "back Britain" as well as saving money and reducing carbon emissions.

"It's not a big thing or a difficult thing to do, just remembering to do it 12 times this winter and get that money back, when we are all really struggling with energy bills and the cost of living generally," he told the BBC.

"We can all do our little bit, we can shift demand out of that peak and help maintain security of supply throughout the winter." 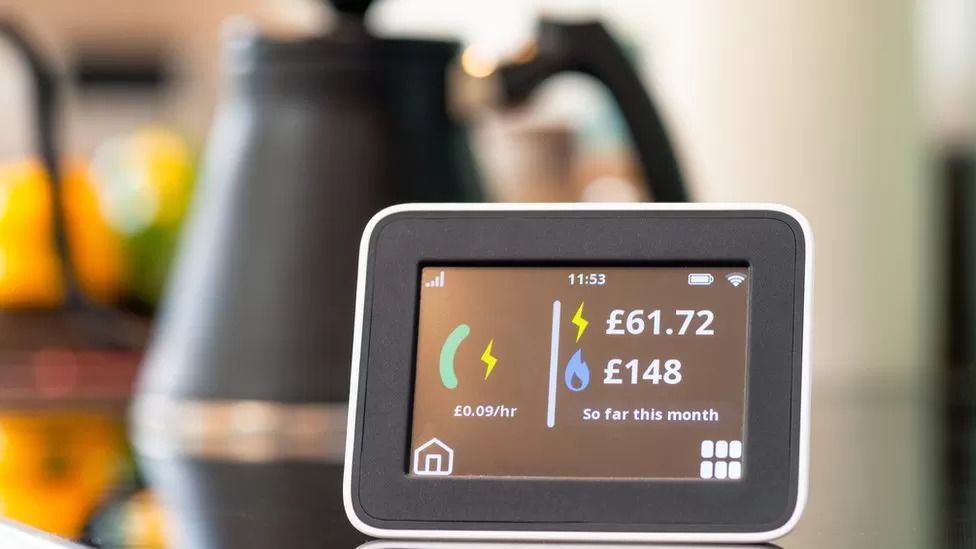 The scheme only applies to homes with smart meters.

Octopus Energy has already announced it will participate. It operated a trial scheme with 100,000 customers earlier this year, offering a much smaller discount for people who shifted their energy use away from peak times.

It believes there will be more days on offer - 25 in total compared to 12 planned so far - for households to be given the chance to cut down on energy use as the UK goes through the winter.

Octopus Energy said that 350,000 customers had signed up in advance of the latest test days.

Its boss, Greg Jackson, said: "Let's be very clear: this is an historic moment - we're entering a new era of energy in which households are moving from passive off-takers to active enablers of a smarter, greener and cheaper grid."

He suggested that the service could mean "we make blackouts a thing of the past, and bring costs down for everyone."

Dunkan Armstrong, an Octopus Energy customer based in Edinburgh, took part in the trial of the new scheme and said he was asked to reduce his energy usage for a couple of hours a day.

A retired IT architect, he set up a system where his dishwasher and washing machine only switched on overnight.

"If I reduced usage by 40% between 4pm and 6pm I would get all of the electricity I used in that period for free."

He said that he enjoyed the challenge although he did not save a huge amount of money.

The financial incentive has now gone up and he adds: "I would still do it anyway, for the sake of me turning off my energy so others who desperately need it don't have to experience blackouts."

National Grid said Russia's invasion of Ukraine had created "unprecedented turmoil and volatility" in the energy markets in recent months.

Gas flows from Russia to Europe have been disrupted since its invasion of Ukraine, leaving countries scrambling for alternative supplies, which could have a knock-on effect on Britain.

The UK is heavily reliant on gas to produce electricity, with gas-fired power stations generating more than 40% of the country's electricity.

National Grid's central view remains that there will be enough energy to provide Britain with similar levels of electricity to previous winters.

It said its service is aiming to save two gigawatts of electricity, which is enough to power about one million homes.

The company has also put coal-fired power stations on standby in case they are required to boost energy generation.