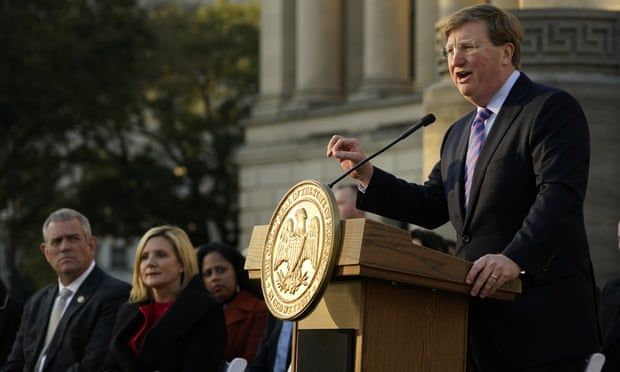 ‘That is not what we’re focused on at this time,’ says Tate Reeves while state has ‘trigger law’ that would outlaw almost all abortions

The Republican governor of Mississippi has refused to rule out attempting to ban some forms of contraception if the supreme court ruling that guarantees the right to abortion should fall.

“That is not what we’re focused on at this time,” Tate Reeves said.

The ruling, Roe v Wade, seems likely to be overturned this summer, after the leak of a draft supreme court decision supported by five conservatives on the nine-member court.

The leak set off celebrations among conservatives and protests among liberals, as a near 50-year battle over a key privacy right approached a decisive moment.

Like other states, Mississippi has a “trigger law” which if Roe falls will outlaw almost all abortions, with exceptions in cases of rape or threat to the life of the mother. The case at issue in the draft ruling, Dobbs v Jackson Women’s Health Organisation, originated in Mississippi.

Speaking on CNN on Sunday, Reeves confirmed that his state’s trigger law would go into effect if Roe is overturned.

Reeves’ host on CNN, Jake Tapper, then referred to neighbouring Louisiana, where Republicans have advanced a bill to make abortion a crime of murder.

Tapper said: “They’re talking about not only criminally charging girls and women who get abortions as committing homicide, but they’re also talking about defining the moment of conception as fertilisation, which would theoretically … mean if you use an IUD [intrauterine device], you are committing murder.

“… I’m not making this up. These are the conversations going on in legislatures in your area. So, just to be clear, you have no intention of seeking to ban IUDs or Plan B [morning-after pills]?”

Reeves said: “That is not what we’re focused on at this time.

“We’re focused on looking at – see[ing] what the court allows for. The bill that is before the court is a 15-week [abortion] ban. We believe that the overturning of Roe is the correct decision by the court. And so, in Mississippi, we don’t have laws on the books that would lead to arresting individuals or anything along those lines.”

Asked if that meant he would arrest doctors who performed abortions, Reeves said: “I don’t think that you’re going to see doctors performing abortions if we have a state statute which says that they’re not allowable, except for those exceptions that we have mentioned earlier.”

Reeves also said: “I believe that life begins at conception.

“And as I have said repeatedly – and I know where this question is ultimately going with respect to birth control and other measures – I want to be clear. My view is that the next phase of the pro-life movement is focusing on helping those moms that maybe have an unexpected and unwanted pregnancy.

“The next phase of the pro-life movement is making sure that those babies, once born, have a productive life. And while I’m sure there will be conversations around America regarding [contraception], it’s not something that we have spent a lot of time focused on.”

“It’s outrageous that this governor and governors and legislatures across America are going to take this draft opinion, when it is final, and deny women these fundamental life-and-death decisions about their future and about their families.”
Add Comment