The price of shop-bought milk, cheddar cheese and eggs has risen by an eye-watering 27.3% in the previous 12 months.

The cost of milk, cheese and eggs has risen at the fastest rate in 45 years, helping drive overall inflation to its highest level in four decades.

Earlier today it was announced there has been a higher-than-expected leap in the rate of inflation, taking it to 11.1% last month.

Increases across a range of items - including gas, electricity, food and drink - are some of the biggest drivers of inflation, while a decrease in motor fuels partially offsets the rise.

Inflation on food and non-alcoholic beverages is now estimated to be at its highest rate since prices in this area rose by 16.4% in 12 months - the highest since September 1977 when it stood at 17.6%.

Families have been hit by soaring costs of staple foods, such as milk, cheese and eggs, while there were also significant hikes across everyday items, including sugar, tomato ketchup and jam.

Collectively, the price of shop-bought milk, cheddar cheese and eggs has risen by an eye-watering 27.3% in the previous 12 months.

The cost of cooking oils and fats now 33% higher than they were a year ago. Most of the UK's sunflower oil comes from Ukraine and - following Russia's invasion of the country - there were supply shortages earlier this year.

The rise in the cost of groceries has been accelerated by the war, which has pushed up the cost of fertiliser and animal feed due to the impact on grain supply from the region.

Global meat and dairy prices have jumped as a result.

Of the non-alcoholic drinks, mineral water, soft drinks and juices have risen the most, with prices now 14.6% higher.

Figures show the lowest earners are facing the highest rate of inflation.

The highest earning 10% of households are experiencing inflation at 9.6%, while the lowest earners are seeing it at 12.5%.

Data in October previously found the lowest-cost groceries have become 17% more expensive in the past year - above the rate of inflation - suggest the cost of living crisis is being felt worst by poorer households.

Over the past year the budget food items with some of the highest increases were: tea which went up by 46%, chips by 39%, bread by 38% and biscuits by 34%. 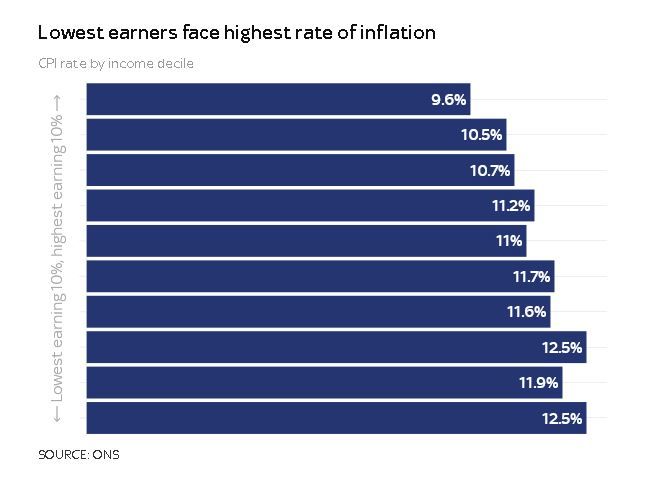 Over the past year, gas prices have climbed by nearly 130%, while electricity has risen by around 66%.

This is despite government energy support, which has sought to limit annual household gas and electricity bills to around £2,500 a year.

As of October 2022, households are paying, on average, 88.9% more for their energy than they were a year ago.

Domestic gas prices have seen the largest increase, with prices last month more than double what they were a year earlier.

Chancellor Jeremy Hunt blamed the impact of the pandemic and Vladimir Putin's war in Ukraine for the spike in prices as he warned that "tough" decisions on tax and spending would be needed in Thursday's autumn statement.

The rise in inflation was partially offset by motor fuels after average petrol prices fell on the month.

However, the price for diesel rose - taking the disparity in price between the two fuels to its highest on record.