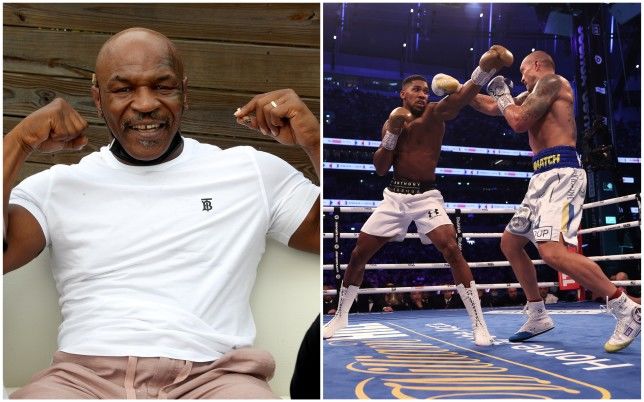 Mike Tyson has dismissed suggestions either Anthony Joshua or Oleksandr Usyk could have beaten him in his prime.

Usyk turned in a masterful performance at the Tottenham Hotspur Stadium on Saturday, winning the IBF, WBO and WBA heavyweight titles after beating Joshua via a unanimous decision from the judges.

Tyson, boxing’s youngest heavyweight champion, was unimpressed with what he saw from the two, however.

He wrote on Twitter: ‘After watching Joshua bs Usyk fight, maybe they had a bad day that night. From that performance, do you really think they could have beat me in my prime?’

He follows in the footsteps of Evander Holyfield and David Haye by becoming just the third man to win world titles at cruiserweight and heavyweight.

Joshua however will have the opportunity to reclaim his titles thanks to a rematch clause, with promoter Eddie Hearn suggesting a second fight could take place in February or March next year.

‘So it’s not so much what he done, it’s the opportunities that I gave him. It’s not so much him. I’m just going to go back and look at myself and correct my wrongs.

‘I’m a different kind of animal. I’m not a sulker. This is a blessed opportunity, to be able to fight for the heavyweight title of the world, fight good fighters time and time again and for people to come out.

‘I’m not going to be going home and be crying about it, because this is war. It’s a long process. This isn’t just one fight and then I’m done.

‘I’m going back to look at way that I can improve. Straight away, I’ve already been watching the fight and thinking ‘I could’ve done that better’.’