More than 40,000 migrants have crossed the Channel in small boats so far this year, the BBC has calculated, the highest number since figures began to be collected in 2018.

The official figure will be released by the Ministry of Defence on Sunday.

The government hopes its plan to send some migrants to Rwanda will deter people from crossing the Channel.

Two weeks of bad weather in the Channel has allowed the Home Office to reduce the number of migrants being held at Manston, the overcrowded processing centre in Kent.

At one point there were thought to be 4,000 migrants at the centre - despite it being designed to accommodate only 1,600.

Milder weather on Saturday saw more than 100 migrants brought ashore by Border Force ships and lifeboats, according to eyewitnesses and rescuers who spoke to the BBC.

Patrols along the French coast have so far failed to stop people making the dangerous journey.

Talks on a deal with France over small boat Channel crossings are in the "final stages", No 10 said this week.

Rishi Sunak had his first meeting as prime minister with French President Emmanuel Macron at the COP27 climate summit in Egypt.

The French government said the two leaders had agreed "to advance co-ordination to face the challenge of irregular migration".

The large majority of migrants claim asylum, and many are housed in hotels while awaiting the outcome of their applications.

Applications are meant to be decided within six months, but delays mean many migrants are staying in hotels for longer.

MPs learned last month that just 4% of people who arrived in small boats last year have had a decision made about their application.

Ipswich Borough Council and the East Riding of Yorkshire Council failed to stop asylum seekers from being relocated to large hotels in their areas this week.

The local authorities had argued that hotels were being converted into hostels, in breach of their local planning controls.

Without significant change, the number of migrants crossing the Channel in small boats could be closer to 50,000 by the end of the year. 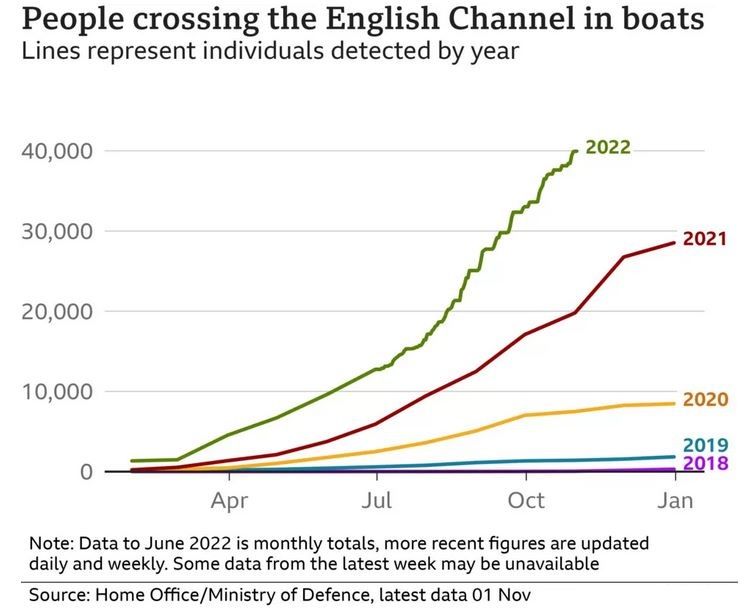