Three exquisitely decorated canoes hand-carved in the jungles of southern Mexico and borne across the Atlantic on a ship tasked with a peaceful, symbolic – and cumbia-soundtracked – invasion of Spain could soon find a permanent mooring in the heart of Madrid.

More importantly, proceeds from the sale of the small boats could help save some of the tens of thousands of men, women and children who risk their lives crossing the Mediterranean each year.

The cayucos, or dugout canoes, were brought to Europe by a band of Indigenous Zapatistas who arrived in northern Spain in June last year on a mission of solidarity to mark the 500th anniversary of the conquest of Mexico.

The boats, along with an anti-capitalist embroidery, a painting and a video, ended up on display at Madrid’s Reina Sofía museum in a room that explores post-colonial community resistance including the social, political and cultural struggle of the Indigenous, anti-globalist Zapatista National Liberation Army (EZLN).

Fifteen months after the Zapatistas’ rusty ship La Montaña docked in the northern Spanish region of Galicia on a voyage “to sow life – not like 500 years ago”, the museum is in the process of buying all six items from the EZLN.

The rebel group will donate the proceeds from the €25,000 (£21,000) sale to Open Arms, the Spanish NGO that rescues migrants and refugees in the Mediterranean, and whose efforts have brought it into conflict with Italy’s former interior minister and far-right leader Matteo Salvini.

The EZLN, which became famous for leading an uprising in Mexico’s southern Chiapas state that coincided with the enactment of the North American Free Trade Agreement in 1994, said it was donating the money to Open Arms because it had been profoundly moved by the NGO’s humanitarian work.

“For some time now, we have been following the route of pain and suffering that migrants travel when, in a bid to escape a destiny of death and destruction, they dare to cross the sea to reach European land,” it said in a characteristically discursive, irreverent and impassioned letter.

“We saw that there were people who cannot witness an inhumane act without doing something to try to remedy or alleviate it. And so it happened that, from the mountains of south-east Mexico, we watched boats that left the paralysis of docks and tourist routes and set off to rescue those shipwrecked in European waters.”

Open Arms responded with a heartfelt statement of its own, thanking the EZLN for what it termed “a hug of solidarity that builds bridges where others build walls and for a borderless generosity that sows life where others sow death and destruction”.

In keeping with the spirit of the canoes, it added, the donation would be spent on buying a new launch for its Astral rescue ship “so we can carry on with our vocation of an endless journey, a journey for a life of dignity and in defence of the rights of human beings with no distinctions whatsoever”.

The EZLN said that while it was delighted by the Reina Sofía’s “incomprehensible” decision to offer €25,000 for the canoes and artworks, it would gladly have handed them over for any price.

It said the canoes had been transported onboard La Montaña for two reasons: “to save on the postage costs to Europe”, and to make sure that the crew – whose only previous sailing experience had been on rivers and lakes – would feel “safe and happy” in the event of a shipwreck. 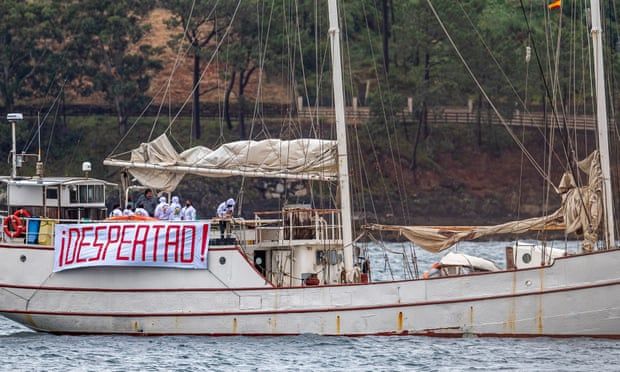 Seven members of the 421 Squadron of the Zapatista Army of National Liberation (EZLN) arrive onboard La Montaña at the port of Baiona, Spain, in June 2021.

According to the Zapatistas, the trio of cedar and mahogany cayucos, one of which was decorated by children, contain references to “Maya ancestors and the struggle for survival of current Zapatista communities”.

The Reina Sofía, which is waiting for the purchase to be approved by the museum’s board and the Spanish culture ministry’s export committee, says the canoes encapsulate “the distinguishing features of the revolutionary movement’s worldview: the imaginary of native peoples, resistance from the Lacandon jungle and the logic of community”.

The EZLN has asked a Galician theatre group, Pallasos en Rebeldía (Clowns in Rebellion), to help it navigate the sale and the accompanying bureaucracy.

Pallasos en Rebeldía – which uses theatre, music, circus and clowning to help refugees and Indigenous people in Mexico, Brazil, Palestine and Greece – had previously assisted the Zapatistas by transporting the canoes on the last leg of their journey from northern Spain to Madrid.

Iván Prado, the group’s spokesperson, said he had been surprised but thrilled to learn that cayucos would pay for a new rescue boat for Open Arms.

“It’s a lovely gesture but it’s also very much in keeping with the Zapatista path,” he said. “It also speaks very well of the Reina Sofía as a living museum. I’m not surprised they bought these pieces because they’re really impressive artistically and beautifully made.”