Warsaw is turning to major arms deals with South Korea to establish supremacy in Continental Europe.

When a stray missile landed in a Polish border town last week killing two people, some European leaders worried as much about how Poland’s right-wing government would react as they did about the possibility that Russia had ordered the strike.

Poland’s longstanding distrust of all things Russian and the current government’s deep antipathy toward Moscow triggered concern from Brussels to Berlin that Warsaw might do something rash.

Instead of losing its nerve, however, Warsaw was stoical, placing its armed forces on alert, while also keeping its powder dry until there was clarity about what happened. (The conclusion is that it was an air defense missile fired by Ukraine to protect itself from a Russian attack that went astray.)

That calm was born of a simple reality that has for years passed most of Europe by: Poland has what is arguably Europe’s best army. And it’s only going to get stronger.

Poland’s paranoia about Russia prompted it to eschew the prevailing Zeitgeist across much of Europe that conventional warfare was a thing of the past. Instead, it is building what are now on track to become the EU’s heftiest land forces.

“The Polish army must be so powerful that it does not have to fight due to its strength alone,” Prime Minister Mateusz Morawiecki said on the eve of Poland’s independence day.

It’s a shift that has resonated with Poland’s indispensable ally.

“Poland has become our most important partner in continental Europe,” a senior U.S. Army official in Europe said, citing the crucial role Poland has played in supporting Ukraine and in shoring up NATO defenses in the Baltics.

While Germany, traditionally America’s key ally in the region, remains a linchpin as a logistical hub, Berlin’s endless debates over how to resurrect its military and lack of a strategic culture have hampered its effectiveness as a partner, the official said.

As Germany continues to debate the details of what it calls the “Zeitenwende,” or strategic turning point triggered by Russia’s invasion of Ukraine, Poland is already making substantial investments.

Warsaw has said it will raise its target defense spending from 2.4 percent of gross domestic product to 5 percent. Meanwhile, Germany, which spent about 1.5 percent of GDP on defense last year, is debating whether it can maintain NATO’s 2 percent goal after it exhausts a €100 billion defense investment fund it approved earlier this year.

Polish Defense Minister Mariusz Błaszczak pledged in July that his country would have “the most powerful land forces in Europe.” It’s well on its way.

Poland already has more tanks and howitzers than Germany and is on course to have a much larger army, with a target of 300,000 troops by 2035, compared with Germany’s current 170,000.

Today, Poland’s military is about 150,000 strong, with 30,000 belonging to a new territorial defense force set up in 2017. These are weekend soldiers who undergo 16 days of training followed up by refresher courses. They were initially seen as a bit of a joke, but Ukraine’s success in using mobile militia equipped with anti-tank and anti-aircraft missiles now makes the idea seem much more sensible.

“Today, those doubts have disappeared,” Błaszczak said during a recent swearing-in ceremony for new territorial troops.

“The Poles have a much more positive attitude towards their military than Germany because they had to fight for their freedom,” said Gustav Gressel, a former Austrian military officer and security scholar now with the European Council on Foreign Relations. “In military circles no one questions the quality of the Polish army.”

Whether Poland’s military might will translate into political influence in Europe is another matter, however. 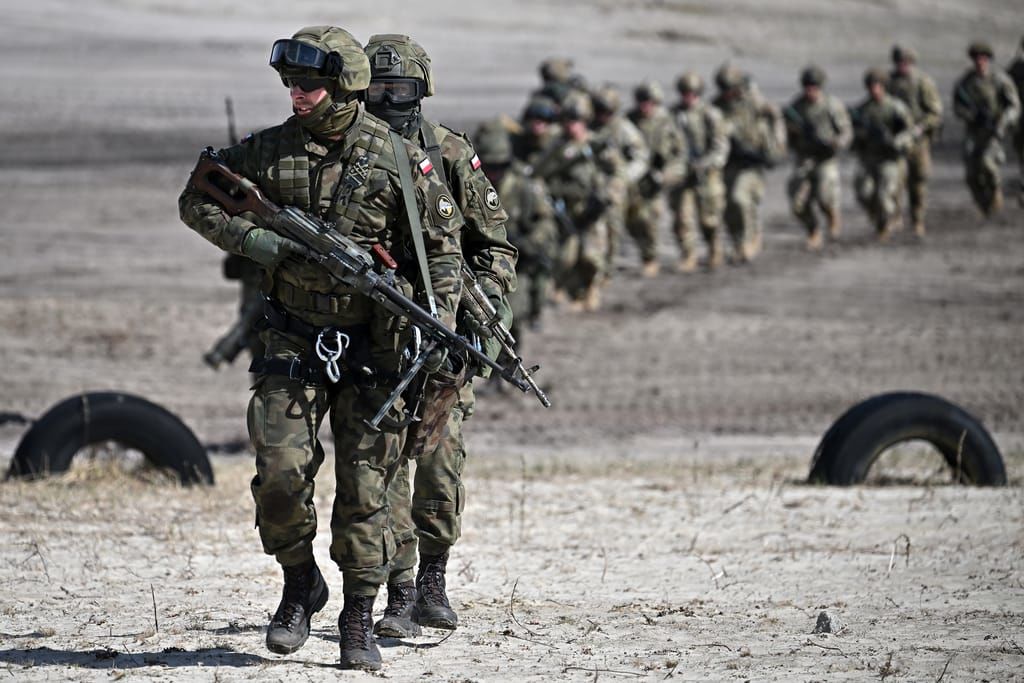 Troops from the Polish 18th Mechanised Division and the 82nd Airborne Division (U.S.) take part in tactical and fire training on April 8, 2022 in Nowa Deba, Poland

So far that hasn’t happened, in large part because the centrist forces that dominate the EU distrust Poland’s government, which is controlled by the nationalist Law and Justice Party (PiS).

The ongoing tug-of-war between Warsaw and Brussels over what the EU sees as the government’s disregard for democratic norms and the rule of law has damaged the country’s reputation across the bloc.

“Poland boxes under it weight politically because of its internal conflicts,” Gressel said, highlighting the infighting that exists even within PiS over the country’s direction and how far to go in compromising with Europe.

The one thing Poland’s fractious political parties can agree on, however, is the necessity of strengthening the military.

While concerns about Russia spurred that push, Warsaw is also worried about the reliability of Washington. Unlike most of the rest of the EU, however, their concern isn’t that Donald Trump will return as president, but that he won’t. Despite the deepening cooperation between the American and Polish militaries in helping Ukraine, Poland’s current leadership remains distrustful of President Joe Biden, who as a candidate referred to the country’s government as “totalitarian.”

Even as Washington has welcomed Poland’s defense spending pledges, there are also questions about whether Warsaw will really follow through, as well as frustration that the country is turning to South Korea for some of its biggest purchases.

Poland signed a 23 billion złoty (€4.9 billion) deal for 250 Abrams tanks from the U.S. this spring — a quick replacement for the 240 Soviet-era tanks sent to Ukraine. Its air force is equipped with U.S. F-16s and in 2020 Warsaw signed a $4.6 billion deal for 32 F-35 fighters. But the focus of its recent military spend has been Korea, where it has signed a flurry of deals to buy tanks, aircraft and other arms.

So far, Poland has ordered between $10 billion-$12 billion worth of weaponry from Korea, said Mariusz Cielma, editor and analyst at Nowa Technika Wojskowa, a military technology news and analysis website.

That’s only the used gear.

Poland’s appetite for new arms is even bigger.

Complementing the immediate supplies, the Koreans are expected to supply a total of 1,000 K2 tanks and 600 K9 Howitzers by the mid- to late 2020s.

“No Western country wants to scale up its military so much and so fast. Whoever will get Poland’s arms deals, they’re in for decades of benefits because you have to maintain and repair the equipment,” Cielma said.

The attraction of Korea is that their military equipment is generally cheaper than American and European alternatives and they can produce it on a tight timetable. The purchases are, of course, a poke in the eye to French President Emmanuel Macron’s dreams of “strategic autonomy” in which he imagines a Europe that is able to defend itself with homegrown (most likely, French) weapons.

But Polish leaders have made no secret that Europe’s pressure on Poland over its controversial judiciary reforms and other issues has also played a role in the decisions to going shopping in Seoul.

“We are ready to buy arms in other EU countries but they need to stop their war against Poland,” PiS chairman Jarosław Kaczyński said earlier this month. “We are ready to hand out deals and money, but not when we’re being told that there’s no rule of law in Poland.”

Warsaw has ordered Italian Leonardo helicopters for 8 billion złoty, but the agreement stipulated that the choppers be made in Poland.

While no one questions the ambition of Poland’s spending spree, some do wonder about its feasibility and the political motives driving the push. By 2035, the country aims to spend 524 billion złoty on the military.

“Okay, we need tanks and howitzers but do we need so many from the strategic and operational standpoint? There is no clarity as to why the ministry suddenly announced all those deals,” said retired army general Stanisław Koziej, former chief of Poland’s National Security Bureau, a presidential office.

Given the importance of security to Poland’s electorate, many suspect PiS is making the military investments with an eye toward next year’s national election, as the party is losing traction in opinion polls.

If there is a change of government, the new cabinet will have to ask some tough questions on Poland’s ability to finance such an enormous military expansion, Koziej said. While Poland’s economy has been robust in recent years, the level of planned military spending is unprecedented and is bound to strain the country’s budget.

“There has to be a balance between military spending and the overall economic development of the country,” Koziej said. “Whatever the plans are, they had better go through an analysis of what the strategic conditions of Poland’s security will be after the war in Ukraine.”

Germany, meanwhile, appears to welcome Poland’s military buildup despite the difficult bilateral relationship between the two countries and the troubled history between the two. Berlin regards Poland as a buffer separating it from Russia’s sphere of influence. The more tanks and troops Poland has, the safer Germany will be.

“I get the impression that the Germans see the next hammock,” Gressel said, referring to Berlin’s reputation for sitting back and relaxing while allies, in particular the U.S., do the heavy lifting on defense.