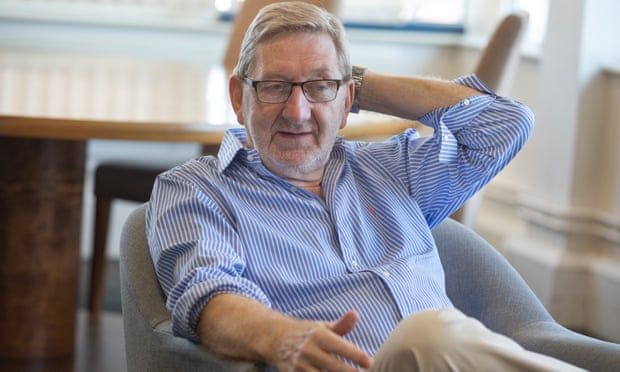 McCluskey accuses Starmer of reneging on pledge to reinstate Corbyn

Len McCluskey has revealed for the first time his detailed recollection of negotiations with Keir Starmer to readmit Jeremy Corbyn to the Labour party, and accused the leader of reneging on private promises.

The former Unite general secretary, who stepped down last month, said Starmer “risks becoming fixed in the public’s mind as someone who can’t be trusted”. Writing in the Guardian, he gives an account of the private conversations – a section redacted in review copies of his memoir, Always Red, because of its sensitivity.

Key Labour sources close to the negotiations have hit back at McCluskey’s version of events, giving clarification for the first time. They denied there was a backroom deal to readmit Corbyn, who was suspended for a statement he made in October 2020 following the Equality and Human Rights Commission (EHRC) report into antisemitism in the party during his leadership.

They told the Guardian that the disparity occurred because Corbyn refused to delete his original statement. One senior figure claimed the national executive committee (NEC) had asked and expected the former leader to do so.

“Len cannot acknowledge that even he could not get Jeremy to apologise or retract his original statement,” one senior figure said.

In his original response to the EHRC report, which found serious failings, Corbyn acknowledged that “one antisemite is one too many”, but said the problem was “dramatically overstated for political reasons” by opponents and the media.

McCluskey claims Starmer then personally ordered the suspension of the former leader from the party – a move that would go against the equalities watchdog’s ruling that there should be no political interference in disciplinary matters.

He also claims Starmer reneged on an agreement to readmit Corbyn after a new statement was issued. Though the party’s ruling body restored the former leader’s membership, Starmer has not reinstated the Labour whip.

In his Guardian piece, McCluskey says he recalled the words Starmer used when he called to tell him about Corbyn’s suspension. “His words were: ‘He put me in an impossible position and I had no choice’ … He told me on the phone that Corbyn had deliberately undermined him. ‘It’s as if he’s gone out of his way to contradict that line in my speech,’ he said. ‘I’m beyond angry with Jeremy.’”

Labour sources denied those words were tantamount to an admission that Starmer had ordered the suspension.

Those close to the situation in the leader’s office say the party’s head of legal gave the general secretary, David Evans, his view that the EHRC’s conclusions meant Corbyn had to be suspended and Evans agreed. Starmer was in the room at the time.

“Keir could not have ordered the suspension. He had been briefed multiple times by the EHRC about the implications of this report – he took it extremely seriously,” one senior aide said.

The day after the decision, McCluskey and the MP Jon Trickett met Starmer, his then chief of staff, Morgan McSweeney, and the deputy leader, Angela Rayner.

“Rayner began by requesting our discussion be confidential. Given what happened subsequently, I no longer feel bound by that,” McCluskey said. “Trickett and I asked if there was a way to negotiate a settlement to avoid an internal war. Starmer replied that he didn’t want a war and was happy to talk about ways to reach a solution.

“He indicated that a clarification statement by Corbyn could be a way of resolving the issue. ‘Are you saying that if we could reach an agreed form of words that both Jeremy and you, Keir, are happy with, then the suspension could be lifted?’ I asked. ‘Yes,’ Starmer said. The others also agreed.”

McCluskey claimed that Trickett and Starmer’s senior adviser, Simon Fletcher, had worked up a draft statement that was discussed in a conference call with McSweeney. “I said: ‘As far as we are concerned, it is our expectation that if Jeremy agrees to the statement, then that is the end of the matter and the suspension will be lifted, after due process, and Jeremy will be back to normal.’

“McSweeney’s response was: ‘Yes, that is our expectation, also.’ ‘And you speak on behalf of Keir?’ I asked. ‘Yes,’ came his reply.”

Senior figures close to Starmer said Corbyn’s allies were advised that it was their expectation, based on precedent, that the former leader would be readmitted with a warning, but claim that was not a promise to stitch up the process, only a way of encouraging him to retract and apologise.

“There was, categorically, no deal on reinstatement, only a discussion of what we expected to happen,” the source said. “McCluskey demanded a number of things that would have overruled the whole process and we said no.”

The source said Starmer would have welcomed the statement had it been issued over the weekend, but claimed McCluskey was unable to sign it off with Corbyn because he had gone to the Isle of Wight.

Corbyn published his statement several weeks later ahead of the disciplinary hearing. It said: “To be clear, concerns about antisemitism are neither ‘exaggerated’ nor ‘overstated’ … The point I wished to make was that the vast majority of Labour party members were and remain committed antiracists deeply opposed to antisemitism.”

Later that day, a five-person panel at the NEC advised that his suspension could be lifted with a warning.

“I don’t know if Starmer was taken by surprise by the backlash, but it soon became clear he was going to crumble,” McCluskey said. “Starmer reneged on our deal … Corbyn was now told that if he wanted the whip restored, he would have to make an apology – which prompted the question: if an apology was so important to the leadership, why didn’t they include one in the statement they co-wrote?”

Sources close to Starmer say the sticking point remains that Corbyn did not retract his original statement, which remains online.

“Jeremy knows what he needs to do – and it is still unclear why he does not delete the original statement,” one senior figure said. “If that does not happen, it is hard to make the argument that you regret it. He could just press delete. The ball is in his court.”
Add Comment