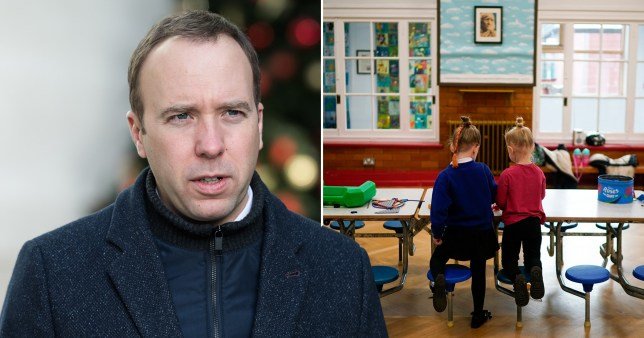 Pressed by Andrew Marr this morning, he simply repeated that there were plans for schools to continue in person teaching.

Mr Marr asked him: ‘Straight question. Are schools going to reopen in January as normal?’

Mr Hancock replied that his task was to ‘weave a line through the incredibly difficult decisions where there are no easy options on either side.’

The interviewer replied: ‘I certainly think there are no easy options. But I’ll ask you again: Are schools going to open as normal in January?’

Mr Hancock responded: ‘The plan is not for a normal opening. It’s for a staggered start in order to ensure that there’s testing, so that we can isolate the children who are positive and therefore keep people safe.’

Asked whether it was possible that schools could close in the way they did in the national lockdown in March, he replied: ‘I’ve learned not to rule anything out in this pandemic.

‘But the plan is for schools to open with the staggered start that we’ve described.’

The Government has promised that a system of mass testing will be put in place by January to allow pupils to return to school in the new year.

But education sector bodies have criticised the plan – which was introduced to school leaders ‘at the 11th hour’ – for its lack of detail on how the systems would be implemented.

Sam Henson, director of policy and information at the National Governance Association (NGA), said the responsibility for the systems put a ‘huge degree of pressure’ on school leaders.

‘What we’re going to end up with is headteachers and school leaders across the country working on Christmas Day and Boxing Day to put these plans in place,’ he said.

‘I don’t think the Prime Minister should be delaying schools coming back any more than they’re already delayed,’ he told a press conference today.

‘What we need is a plan for schools to come back safely and that involves mass testing.

‘The Prime Minister has offered mass testing and now he’s got to deliver on it.’

Professor Devi Sridhar, chairwoman of global public health at Edinburgh University, said that schools should be kept open ‘as much as possible’ but suggested that a distinction should be made between student age groups.

She told Sky News’s Sophy Ridge On Sunday programme: ‘I think we need to divide kids under 12 which we know generally have not transmitted that well between each other, we haven’t seen many outbreaks in nurseries and primary schools, and secondary schools were children are very much like adults after age 12 and how we manage those.

‘But schools need to be kept open as much as possible and the way to do that is to keep our community prevalence low so viruses never even enter the school in the first place.’